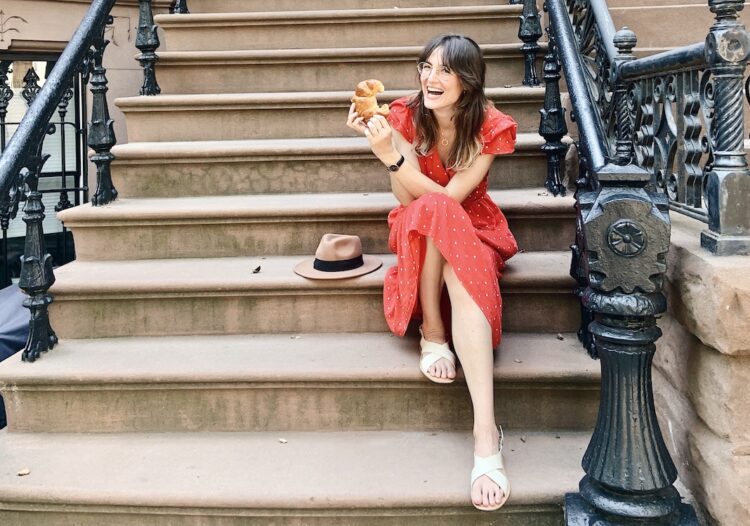 ‘Gay Paris’ doesn’t always live up to its name. But one French influencer is going out of her way to make the City of Lights accessible to everyone, through an online language-learning community built on empathy and respect.

Cécilia Jourdan has done it all. The Parisian native moved to the US after high school to study musical theater, pursuing a career in acting and voiceover work. She later went back to school and studied linguistics and Romance languages, then joined a fashion startup, which is where she began immersing herself in the world of social media. After years working in digital marketing, mostly with French brands, she ventured out onto her own. She started an Instagram page, Hello French, in July of 2020, and began teaching French classes over Zoom at the request of a former student. (Cécilia has been teaching French for over a decade privately and leading language workshops.) She never intended to become an influencer, using social media originally as a way to promote her French lessons. But in February 2022, she decided to leave her corporate job to run Hello French full time, and simultaneously launch a creative boutique agency, J&P, with her wife, Criselis Pérez. Pérez is a creative director, and has been involved with Hello French from the very beginning, building the company website and helping with brand development. The couple now splits their time between Brooklyn and Paris.

Hello French is filled with videos of the statuesque and ever-smiling Jourdan disseminating bite-sized language and vocabulary lessons. She suffuses joy into all of her work, and makes learning a new language feel like less of a grind presided over by a judgmental Parisian professor, and more like a casual conversation between friends. But she’s also careful to slip in messages of acceptance around topics like mental health and LGBTQ+ issues.

“Yes I’m educating about French, and that’s my life, but this is almost kind of the surface of things, and there’s a much deeper message and purpose that is permeating almost all of my content,” Jourdan explains. “I don’t write in my bio that I’m an activist and that I’m advocating for X, Y, and Z, because sometimes it’s easier to reach people when the message is not in your face… if at least I can have a little impact in a day, then I feel really great, and I’m happy to be here for these communities that are still not really well-represented.” She mentions the far reach that her language-learning work has, drawing people in from all around the world, who might be from more insular communities where queer visibility isn’t as common. “A lot of people don’t even realize that I’m gay or queer on my account, and they only do when I talk about it, or I say, ‘my wife,’ or whatever. So I’m like, oh, I’m touching a community that is not like me. So how can I bring awareness? …To me the French aspect is kind of the umbrella that holds all of those things together [mental health, LGBTQ issues]… in order to support it and have a way to communicate.”

As an extension of her work, Jourdan has recently released two eBooks: a French language-learning book called Le Bouquin, and a travel guide called Hello Paris: A Parisian’s Travel Guide (released December 22). She wanted to create a guide that was non-touristy, budget-friendly, and focused on a curated selection of places instead of an overwhelming number of suggestions. “The guide is a clear direction of what you can do in a week in Paris,” she explains. It contains recommendations for restaurants (including vegan & vegetarian options), cafes, bars, hotels, museums, and more, as well as specific vocabulary and cultural tips to make your trip easier. A digital guide, the book will be regularly updated to make sure that its recommendations are always up-to-date.

Keeping the book free from tourist traps like the Eiffel Tower or the Café de Flore was an important component for Jourdan. “My guide is not called ‘A Paris Guide.’ It’s called ‘A Parisian’s Guide.’ It’s not a collection of all those spots that you see on all the travel blogs,” she says, launching into a rant about Emily in Paris and influencer culture. “It’s the American ideal of what they think Paris is, and how Parisians interact with each other… Especially younger generations who watch that, they go to Paris and they want to go to those spots, and all of those spots are extremely touristy. They’re not the ‘real Paris,’ that Parisians live. You end up having foreigners going to Paris, wearing a beret, going to a coffee shop and wearing heels and having so much makeup, and this is not how most French women live their lives in Paris. So I think we are filled with cliches, and Americans are very happy with those cliches, because when they go to Paris they feel that they are living out their fantasy world of Paris.”

LGBTQ Things to do in Paris

Another focus of the book was inclusivity, since Jourdan mentions that she was frustrated by the lack of LGBTQ-friendly recommendations in traditional Paris guide books. In addition to gay bars, the book includes some collectives, which are organizations with a minority or activist affiliation that partner with local gay bars and event spaces to produce regular events. (Though she notes that the collectives included are a very small number out of the total.) “Some are very specific (just lesbian, or queer), some are more global. What I noticed is the lesbians tend to stay with the lesbians, the gays with the gays… so within our community we compartmentalize, yet we’re accepting, but we’re also very different. There’s bars for each, collectives for each. There’s a lot more gay bars than lesbian bars, but New York is the same.”

Many gay bars in Paris are concentrated in the Marais, the historic gayborhood of Paris. Often bars in the Marais which are not formally LGBTQ affiliated will mark their windows with rainbow flags and be considered LGBTQ-friendly even if they are not officially gay bars. But gentrification has pushed a lot of these businesses out. (You can read more about this in my 2021 interview with The Gay Locals, a Paris-based tourism company.)

“Le Marais’s situation is not unique to LGBTQ establishments,” Jourdan explains. “The Marais is shifting to be the new Soho of Paris, where you have luxury, high-end boutiques. It’s becoming this kind of luxury shopping center. All places that are not shops or retail get pushed out because they get bought out or their lease ends, and the owner decides to get a better deal.” But, she says, “So we go to other spots, like the 9th and the 11th… I don’t know how the Marais will shift, I think it will be like Williamsburg. Inevitably, smaller spots with less money and less support will be pushed to other places.”

Maintaining safe spaces is paramount in a country like France, where assimilation is king and those who stray from the norm leave themselves open to side-eye, or worse. “People stare,” Jourdan says, when she and her wife show PDA. “But they don’t only stare at people in my community. They stare at people different from them. So if you dress in lots of colors, you have a wig, anything that is not how Parisians dress, they will look. So being gay is different from the average Parisian.” She mentions that on a recent trip home, “In three months in Paris I only saw one other lesbian couple kiss. For me, Paris is ten, fifteen, twenty years behind New York in terms of diversity and accepting difference.” She doesn’t think anyone should be worried when visiting the city, though. “Paris is safe, but I don’t think it’s as tolerant or open as cities like New York… In the scheme of things, in the world’s perspective, Paris is a very safe, accepting, tolerant place.”