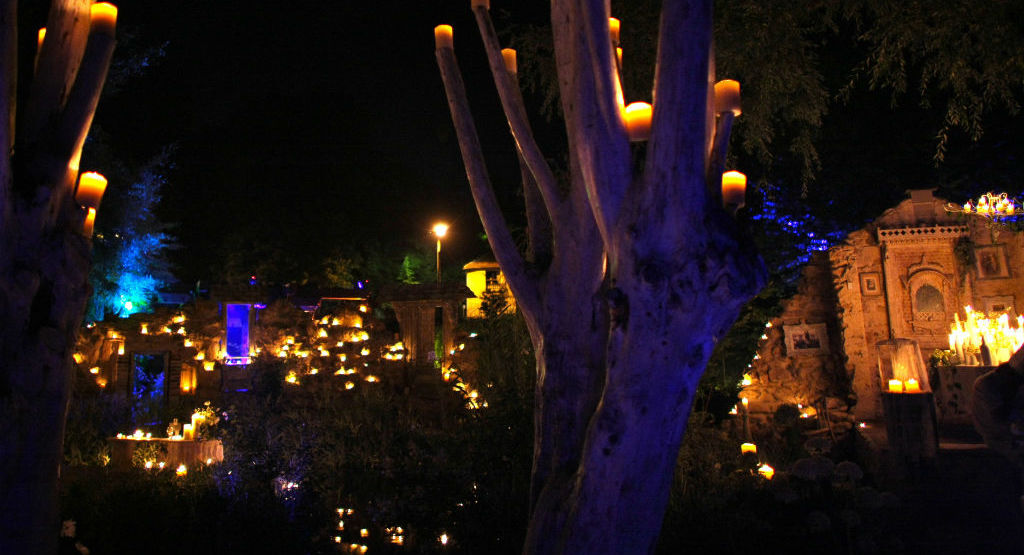 France isn’t all châteaux and stuffy museums. Any country with a long, colorful history is bound to produce a few bizarre — or downright disturbing — roadside attractions. So if you’re looking for tourism with a twist, this is your starter to guide to weird France.

Sometimes one country’s trash is another country’s treasure. Perched atop the hills of the Pyrénées, BelRepayre Airstream & Retro is a trailer park comprised of salvaged vintage aluminum trailers from the 40s, 50s, and 60s. The best part? You can stay in one, for around 80€ per night.

Not all great architecture is built by trained professionals, an idea epitomized by Le Palais Idéal, a strange landmark in Hauterives, France, about an hour south of Lyon, made of thousands of pebbles over the course of 33 years. The structure was declared a national French landmark in 1969.

France’s “Yellow Windmill,” a fantastical park/living art exhibit, looks a little bit like if Alice had decided to set up Wonderland about an hour south of Paris. It was designed by one of Russia’s most renowned clowns — yes, you read that right — a man named Slava Snowshow, currently president of something called the International Academy of Fools. Visits are only available through advance reservations, so be sure you get your tickets well ahead of time, before the rabbit hole closes up for another season.

This odd attraction is not for the faint of heart. While this is a wax model museum, it isn’t exactly one of the Madame Tussauds variety. This museum, in conjunction with the Hôpital Saint-Louis, was the site of some of the earliest dermatological research in the world. These models were used to teach doctors how to identify various skin diseases, but they can be visited nowadays by anyone with the particular sensibilities to enjoy such a spectacle.

This beach on the island of Corsica is known for its sparkling white beaches, its quiet middle-of-nowhereness, and… its bulls? When the weather is nice, you can spot herds of cattle roaming the shoreline or camping out alongside German tourists. But you can’t be surprised. Everyone, bovine or not, loves a nice day at the beach.

Looking for a little slice of Mexico in France? Head to Barcelonnette in mid-August for the wildest Mexican festival this side of the Atlantic. Named the “little Barcelona” of Provence, the town gets its extra dose of tabasco flavor from wealthy Frenchmen who set up shop in Mexico to trade textiles in the 19th century. When they returned, they built Mexican-style villas in the Alps and brought back the language, the food, and the culture of South America. Enchiladas, mariachi music — what more could you ask for?

In Medieval France, meat was expensive. The average person’s diet consisted primarily of grain, so if you had any kind of dough, you put one of these guys in your backyard. A pigeonnier (or “dovecote” in English) was essentially a tiny castle next to your real castle where you could house dozens of pigeons to be harvested for their meat, eggs, and excrement. Basically, it was a way of saying, “I’ve got that pigeon money, I must be someone of wealth and status.” Now these bizarre little houses stand empty along the countryside, although some enterprising hôteliers have turned them into B&Bs you can stay in for a very special holiday excursion.

This bus restaurant takes Parisian dining and touristry to a new level. The BUSTRONOME is a double-decker bus with a panoramic glass ceiling decked out like a five star restaurant. You can sign up for a lunch tour or a dinner tour, and while the prices are steep, those sunset views must be truly stunning.

9. The House Of A Million Pieces

Known as La Maison Picassiette, this charming little curiosity in the town of Chartres was pieced together by Raymond Isadore, who collected bits of plate, glass, and other colorful scraps and covered his house and garden with them over the course of 30 years.