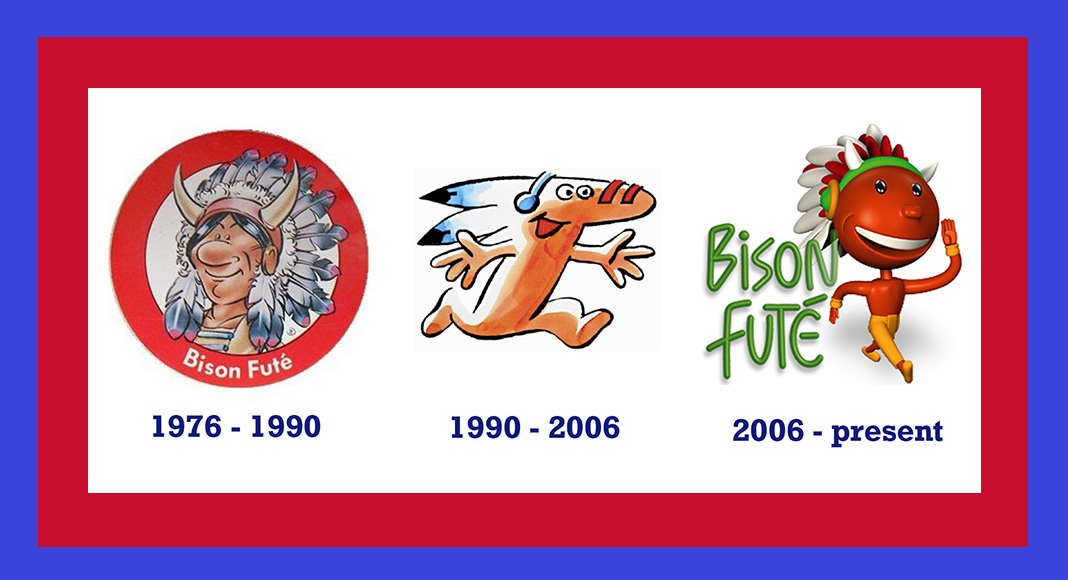 If you’ve ever traveled in France in the summertime, you know to check Bison Futé, the traffic website that tells you how long you’ll be stuck in your car as everyone travels North-South for a taste of Provençal charm. The site and new phone application, which evolved from a series of roadside stops with Bison Futé maps, are used to indicate traffic density and suggest secondary routes so travelers can avoid huge backups on the road.

What hasn’t changed is the traffic information service’s mascot: Bison Futé, a Native American caricature whose name means “Sneaky Bison.” He sports a black and white headdress, leather pants, moccasins, what we can assume to be bison horns on a lime green headband and has dark orangey-red skin.

This is not the first rendition of “Bison Futé.” The illustrated character was put in public view in 1976 after the summer of 75 which had especially bad traffic — cars were at standstill for 600 km (373 miles) between Paris and the south of France. This prompted French authorities to create maps with multiple travel routes for the next year. For this new map, they decided they needed a “dynamic and friendly” mascot “identifiable by anyone” that could be equated to just an informational traffic program. The options for the mascot included a dolphin, giraffe, bird, and rat. And the final selection was Bison Futé, the Native American caricature.

The first summer Bison Futé was implemented, the cartoon face was plastered on maps that offered more routes for summer travelers. Around that time, cutouts were placed along the road. There were also people in costume headdresses mounted on horses to help people with directions. The creator of the image, Jean Poulit, commented that “very quickly, everyone and everyone involved in this domain identified with [Bison Futé].”

Since Bison Futé’s creation, there have been multiple appropriations of the character by independent writers and artists who utilize the mascot in a way that clarifies the racism coded into the imagery. An article discussing the closure of Bison Futé roadside information centers and its new competition with GPS applications starts with: “Who wants Bison Futé’s scalp? Maybe almost everyone.” In a fictional interview piece, the journalist also uses scalping jokes in reference Bison Futé, continuing a stereotype about the history of Native Americans and making light of the devastating genocide of Native Americans in the United States and the incredible violence they faced and continue to face presently.

The branding of Bison Futé pushes harmful Native American stereotypes to the extreme. In early advertisements for Bison Futé that aired on television, he spoke a jumbled and grammatically incorrect French. Cartoons that appropriate the mascot include speech bubble grunts that have nothing to do with Native culture other than to propagate the animalistic stereotype of the “dumb” Native American. The fictionalized interview describes the fake Bison Futé as deep into alcohol, drugs, and sex, with a girl waiting for him at each rest stop. The author continues, writing that “people always left me alone: in general, they thought I was a bison.”

Though these Bison Futé appropriations are not specifically orchestrated by the French government, who manages the Bison Futé brand, these depictions indicate that it succeeded in creating a culturally recognizable traffic icon. They also demonstrate the lack of general cultural sensitivity that went into the design of this icon. Bison Futé was equated to an animal from the very beginning, being the only human option out of a range of animal choices. He is depicted as endlessly smiling and subservient, solely existing to support and facilitate the lives of French people as they navigate vacation traffic.

The National Congress of American Indians has denounced similar stereotypical Native themed mascots. They claim that these negative Native stereotypes “affect the reputation and self-image of every single Native person and foster ongoing discrimination against tribal citizens.” In addition, these “friendly” and “funny” Native mascots like Bison Futé “present a misleading image of Indian people and feed the historic myths that have been used to whitewash a history of oppression.”

Though the Native American mascot is widely known, it does not detract from the harmful effects it has on Native communities and the representation of these peoples. In the United States, for instance, there has been immense pushback against the Redskins mascot or Native American Halloween costumes for their misrepresentation and commodification of Native culture and dress for the profit of non-Native folks, all while erasing the present existence of Native communities. The popularity of such racist images in fact furthers the negative effects since it normalizes racist representations and stereotypes in culture. When asked by email for a comment on the racist stereotypes that Bison Futé was based on and propagates, the Ministry for the Ecological and Inclusive Transition of France, which handles Bison Futé, said, “the minister contests any negative connotation around Bison Futé. It’s one of the most known and popular images of all the French public transit services.”

The Bison Futé mascot and its many appropriations speak to a pervasive misleading stereotype about Native people. This mythologization of Native culture and peoples not only replaces the diverse cultures of Native Americans with a stereotype but whitewashes Native history. In light of President Emmanuel Macron’s move to repatriate African artifacts stolen during Frances’ colonial period, Bison Futé deserves a second look as an appropriation of another culture for France’s benefit. Native Americans deserve more than these racist depictions of themselves just so the French can have a “fun” traffic icon. It’s time to go back to the drawing board and pick something else.