Making people laugh is a challenging task in one language, let alone two. But there is one person in the world who makes it look easy.

Paul Taylor, a Paris-based British comedian, has made a career out of performing bilingual standup comedy in both French and English. Born and raised in the UK, Taylor picked up French as a child when his family relocated to France for a few years, but it would be years before he had the opportunity to test his language skills as an adult. He later came to a baffling revelation: while he continued to make egregious mistakes in French, his accent was good enough that people mistook him, not for a Brit, but for an idiot Frenchman—a fact he has made great comedic use of in the interim.

In 2009, Taylor moved to Paris to work for Apple Inc., but began dabbling in standup comedy at the New York Comedy Night in Paris hosted by fellow comic Sebastian Marx. By 2015, he was doing so well that he quit his job to do comedy full time. In January of 2016, a video Taylor released making fun of “la bise,” the French double cheek kiss and the litany of rules that accompany it, went viral.

People began to take notice of Taylor’s knack for skewering French culture, and was soon picked up by Canal+ for the shows What’s Up France? and What the F*** France, in which he picked apart French stereotypes and idiosyncrasies for the amusement of expats and French people alike. Topics could cover everything from the hilarity of a French butter crisis to the horrors of French bureaucracy.

Around the time the “la bise” video came out, Taylor was also working the Paris comedy scene at the few clubs in town. He had been performing successfully in English, but with limited opportunities in that sphere, he decided to start doing French comedy gigs. “The problem that I was having in French at the beginning is that my French was too good for them to believe that I was English,” Taylor explains. “It was the same jokes, the same stuff that I would be complaining or ranting about onstage,” but the audience reaction he received was underwhelming. “I came to realize that no one believed I was English.” He started faking an English accent when speaking French, and says, “I kind of found my voice in French doing that.”

But small gigs weren’t enough to cut it: he needed to write a standup show. “In France, the way the comedy scene is set up, there’s no circuit of comedy clubs like in the U.S. where you can make money three nights a week,” says Taylor. “There’s four comedy clubs in Paris and that’s it. So the only way to build a career in comedy is you have to have a one hour show that you then take on tour to the different theaters.”

While some bilingual comedians, like Sebastian Marx, have identical shows they perform either in French or English, Taylor ran into a few issues when deciding what language to write his show in. When he sat down to write the show that would become Franglais, he realized that some of his jokes only worked in English, some only in French, and some only when he could use both at the same time. “There’s certain things that if you don’t speak both languages, they don’t work.” So he tried something risky: a show that was half in French, half in English. Franglais became a sold-out show for the three years he toured it. “It was the right place, right time, a bit of luck, and a bit of not having enough material to do a full show in either language that led me to do a show in both languages.”

His audience tends to veer 90% French, 10% expat. But even intermediate speakers won’t have a hard time understanding him in one or the other, thanks to his expressive style of performance. “I think I overdo the gestures so anyone who doesn’t speak the other language kind of understands,” Taylor says. “What’s funny is that the feedback that I get after the shows when I speak to the audience sometimes is that the French speakers think that most of the show is in English, and the English speakers think that most of the show is in French… Whatever language you don’t speak, it feels longer when you don’t understand what’s being said.”

Taylor’s show isn’t just unique in its language component, though—it’s unique in format. He’s part of a new guard of comedians popularizing standup in France. Though Netflix has brought some big names like Gad Elmaleh and Fary to the screen, French standup is still decades behind the US. “In the UK and the US, most of comedy is standup, aside from Saturday Night Live. So we’re used to this thing of somebody being onstage and talking to the audience as if they’re friends, and as if it’s a kind of interaction,” Taylor explains. But in France, traditional character-and sketch-based comedy still reigns. “You dress up and you perform as different characters, and it’s all very theatrical and flamboyant. I’d say, like, 90% of comedy in France that you’d see on TV or you see in shows that are touring across France is that type of comedy.” 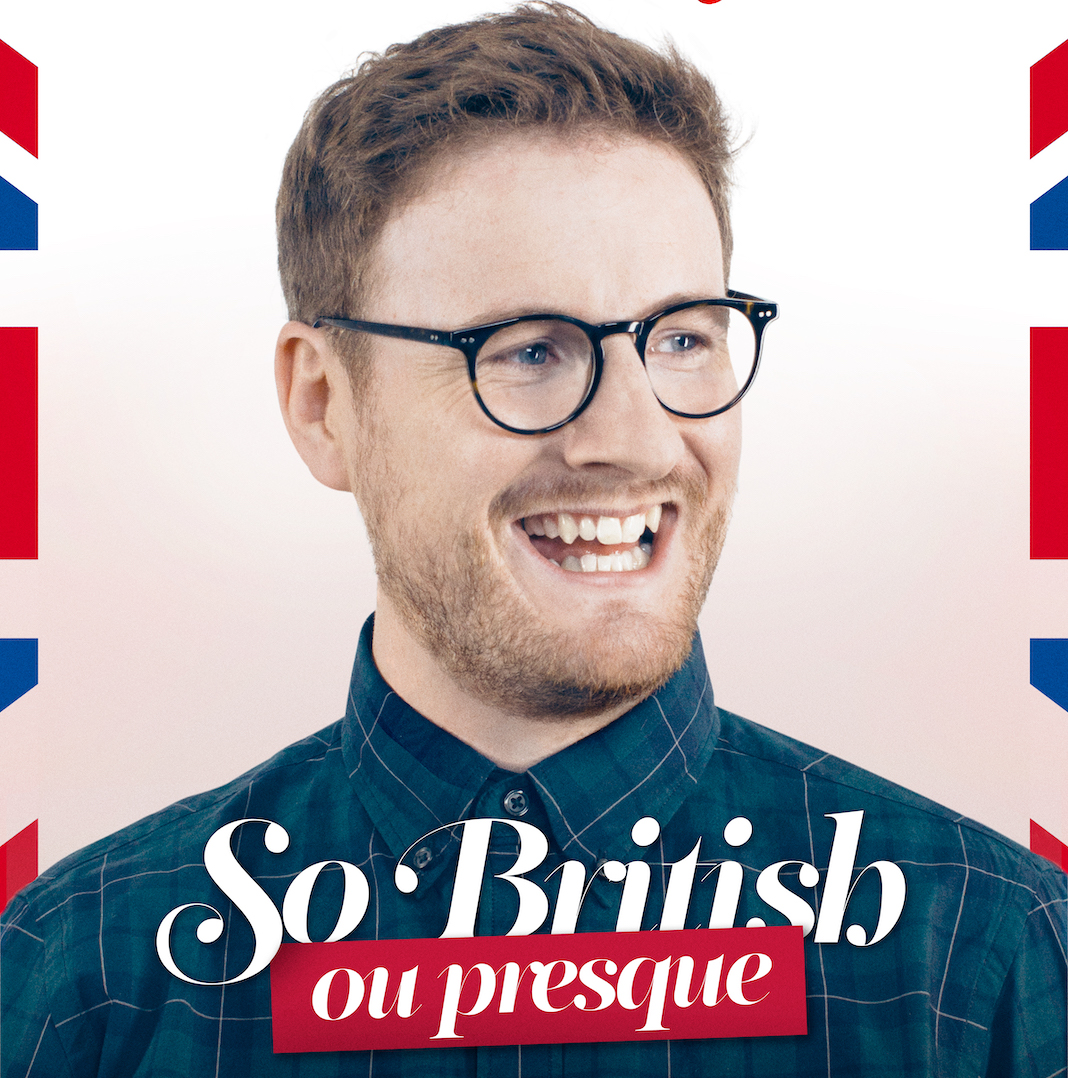 After a year and a half of lockdown, Paul Taylor will finally be bringing to the stage his second standup special, So British Ou Presque. While Franglais was 50/50 French and English (“really 60/40,” he admits), the new show is closer to 75% French, 25% English. While the first show dealt with language learning and culture shock, “This second one is more about identity as a person who’s lived in two different countries, and what it means to come from a country,” Taylor says. After so many years living and working in France, the show talks about the sort of cultural blending that happens when someone is taken out of their homeland and begins to acclimate somewhere new. Is Paul Taylor less British than he was a decade ago? Is he more French? Is he something in the middle? You’ll have to see for yourself to find out.

Catch So British Ou Presque in Paris on October 19 and 20 at Le Grand Rex, or any of his upcoming shows in France through January. Tickets available here.

If you’re not in Europe this winter, you can still watch Paul Taylor’s Happy Hour Live every Monday at 8pm on YouTube.

Catherine Rickman is a writer, musician, arts administrator, and professional francophile based in New York and Berlin.