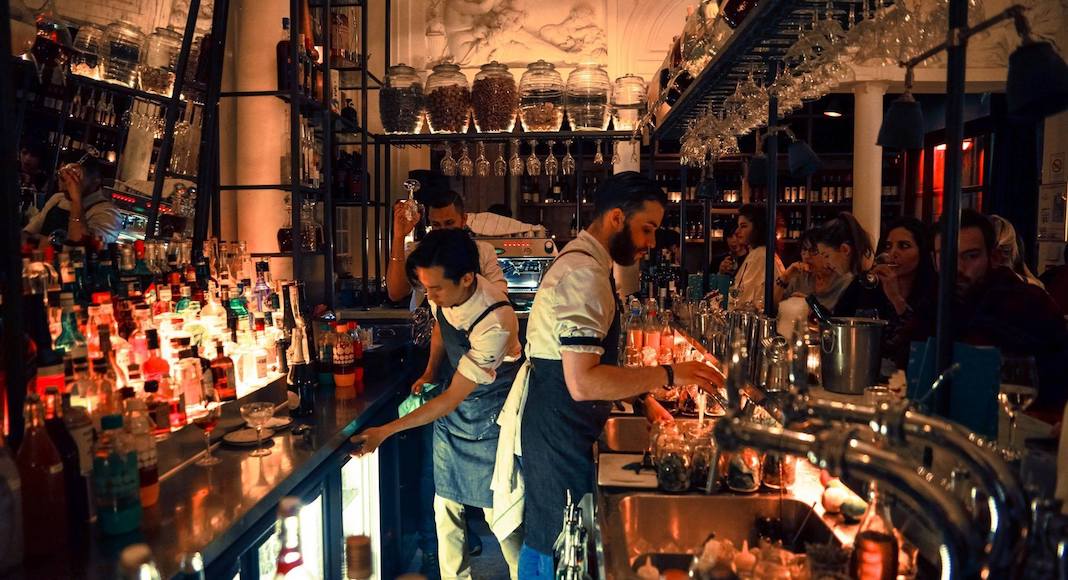 Big Mamma: the Story Behind the Italian Restaurant Empire That Keeps Growing

For some time now, the streets of Paris and elsewhere have been reviving a phenomenon that was thought to have disappeared in Europe since the fall of the Berlin Wall. Long queues, a little feverish, sometimes silent, often cheerful, are constantly spreading in neighborhoods that are not used to this type of event. We can say where and when the next one will appear: the most recent was rue de Paradis, in the 10th arrondissement, in front of the former Indian consulate. On December 6, Libertino, Big Mamma‘s eleventh location, opened. The restaurant group, created by Tigrane Seydoux and Victor Lugger, celebrates Italian cuisine. The lovers of “transalpine food” may be raising restaurants faster than you can say baguette, or rather, ciabatta — eight in Paris, two in London, one in Lille — but nonetheless the queues continue to stretch like pizza dough in front of their XXL-sized trattorias, which don’t accept reservations. Occasionally, several tens of meters of queue fail to discourage the most reckless (and least hungry) to wait up to two hours for a table. Nostalgia for communism or simple perverse delirium, images of these lines permeate Instagram and reward the group with a hell of a free advertisement.

Push through the door of the next location of 220 place settings, which matches the other locations with its breathtaking decor. Libertino immerses its visitors in the retro kitsch of the 1970s with draped and crazy flora, a delirious replica of Italian-style theatre and old televisions broadcasting funny clips by Raffaella Carra in a loop. Enter directly through the open kitchen, walking through the chefs, and, in the basement, sit around a revolving bar.

Good and cheap. The winning recipe of Big Mamma is once again being duplicated: good and cheap, with an extensive menu containing nearly fifty specialities. Here, it’s the shareable dishes that are emphasized. Two, four, or more people, however many, can share the 1-kilo burrata, the thin and crispy Roman pizzas (a first, no Neapolitans!). The huge fresh crab risotto, the 3-kg sea bass in a salt crust, the gigantic ultra-soft lamb shoulder cooked for 16 hours on the Josper grill, and the very, very large birthday cake “crispy, punchy, chocolatey” for 12. The taste of success is in this abundance.

Big Mamma? It’s a flourishing empire whose founders refused to disclose its turnover. So we calculated for them: with an average bill of 25 euros per person times 8,000 covers per day, multiplied by the 365 days of the year, we arrive at the sum of 73 million euros. This is the adventure of two friends who graduated from HEC and abruptly resigned from theirs position in 2012: Seydoux was the right-hand man of businessman Stéphane Courbit at LOV Hotel Collection, a flagship of the luxury hotel industry; Lugger headed My Major Company, the first French platform for the participatory financing of artists.

At 28 years old, the acolytes joined forces to found Big Mamma in 2013. Big-name partners saw the value of the investment: Stéphane Courbit, of course, Xavier Niel, the founder of Free, Frederic Biousse and Elie Kouby, former bosses of Sandro, Maje and Claudie Pierlot… “Our idea was to open up accessible restaurants, sharing the quintessential dishes made by Mammas in remote inns,” these lovers of the dolce vita proclaim. Piedmont, Tuscany, Campania, Puglia, Sicily, Sardinia… The duo traveled for several months to explore the peninsula and its islands in search of treasures. Seydoux, “champion of hospitality,” and Lugger, “food lover,” returned from their road trip with the names of producers of tomatoes, burrata, mozzarella, parmesan cheese, fresh pasta, sausages, flours, white and black truffles, olive oils…

“Tailor-made.” In the meantime, the Frenchmen from Monaco and Strasbourg set up two logistics centers: one in Milan and one in Naples. “We cut all the intermediaries and rely on volumes in order to be able to offer good prices to our guests,” they explain. Before diving into the deep end, all that remained was to find a chef capable of setting this homemade melody to music — the Neapolitan Cira Cristiano joined them in the summer of 2014 — and a kitchen squad that was 100% Italian. The opening of East Mamma in April 2015, with its pizzas starting at 9 euros and its pasta at 12 euros, was a success. The rest is history…

Big Mamma tells the story of the brazen success of two Frenchmen who employ a thousand Italians with an average age of 24. “We focus on the team, it makes us more proud than anything else. If it’s feeling good, the people who eat with us will feel good too,” says the duo, which released “La Cucina di Big Mamma” (Phaidon) in early November (an English version of the book is being released January 8, 2020). Their obsession: to offer their guests the best moment of their day starting with when they enter their establishments. “We don’t sell food, we sell a moment,” they say.

To do “tailor-made,” Seydoux and Lugger created Studio Kiki in 2016, their in-house design and architecture firm. “We’re not here to repeat ourselves, we’re here to surprise.” A small (r)evolution, some tables will be at Libertino will be open for reservations with the possibility of pre-ordering some signature dishes. It’s unlikely that this is enough to shorten the queue on the sidewalk of rue de Paradis…