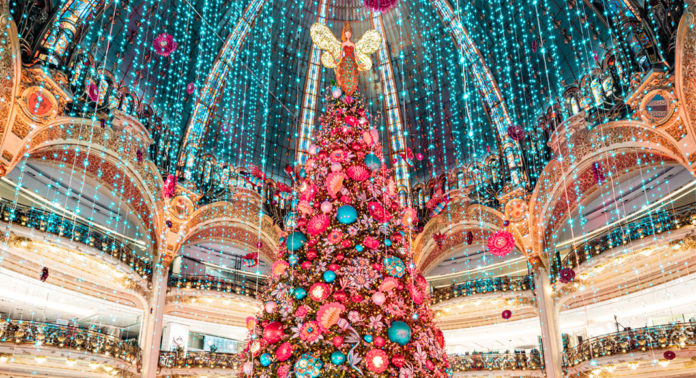 The holidays are here, and perhaps you’ve been lucky enough to find yourself in Paris for the season, when the city is at its most beautiful. Paris is a city that really commits to the Christmas aesthetic, so you really shouldn’t waste any time taking pictures at these gorgeously decked-out locations.

Galeries Lafayette, the grand department store complex in central Paris, is a great place to take visitors — and not just for shopping. Read about this architectural treasure at our link in bio! #tlpicks courtesy of @xena.raw

This department store on Boulevard Haussmann does not take the biggest shopping season of the year lightly. Its enormous tree, made out of candy and balloons, instantly delights visitors of any age… and don’t miss the vitrine displays just outside.

The giant Neo-Classical plaza in the 1st arrondissement that is Place Vendôme gets decked out every year with giant Christmas trees straight out of a picture book, to complement the bronze column in the center designed by Napoleon himself.

From the people who brought you Instagram’s favorite umbrella sky, the shops at Le Village Royal have filled their romantic little alley with enormous teddy bears for you to cozy up to for a sweet pic with the family.

One of the most famous of Paris’s passages couverts, the Galerie Vivienne is the perfect place to duck in and get some stunning photos of the hundreds of strands of Christmas lights hung over shop windows in the covered mall.

After it was announced in 2018 that the famous Champs-Élysées Christmas Market would not reopen, due to a dispute between the market director and the mayor, the market was moved to the Jardin des Tuileries. Wooden chalets, a merry-go-round, and a ferris wheel will offer all the color and ambience you need for a whimsical wonderland backdrop.

Every year at Christmastime, Paris’s most famous boulevard gets lit up so brightly you’d think they were trying to land an airplane on it. Though no longer the home of an annual Marché de Noël, you can find all of that right next door at the Tuileries.

It’s the most wonderful time of the year 🎄 France doesn’t celebrate thanksgiving, so it’s the perfect excuse to get in the Christmas spirit a little early! I stopped by @lebonmarcherivegauche this week and was so excited to see their Christmas trees are up.

Le Bon Marché Rive Gauche is not only one of the most famous department stores in the world, it’s actually the first. Designed by Gustave Eiffel, the captivating and unique architecture of the store is only enhanced by the Christmas trees hanging in midair, belted with bright, zigzag light fixtures.

Paris’s City Hall becomes an active light installation during December. Its Christmas market, now in its second year, will be featuring “Made in France” products through January.

Le Grand Palais has opened the world’s largest temporary indoor ice skating rink inside the historic palace, complete with music, a light show, and a disco ball so large they had to prop it up on the floor instead of hanging it from the ceiling.

Netflix’s New French Show Twice Upon a Time is a Time-Traveling...

21 Designer Bûches de Noël That Will Make Your Jaw Drop

Netflix’s New French Show Twice Upon a Time is a Time-Traveling...