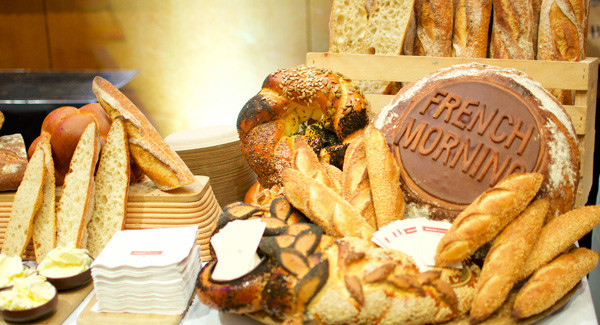 Best Baguette Chicago: And the Finalists Are…

The readers have spoken, and the finalists of Best Baguette Chicago 2017 have been chosen!

The final round takes place February 16th at Sofitel Chicago. We at Frenchly and French Morning warmly invite the public (you!) to join us, sample the best eight baguettes with charcuterie, fromage, and a glass of vin, and decide the winner. Tickets are available for purchase here.

In addition to the public, an impartial jury will carefully select the best baguette through a blind taste test to decide which bread maker will win the Grand Prix. Presiding over the jury will be Jean Joho, the famous French chef from Alsace, and head chef and owner of Chicago restaurant L’Everest. The members of the jury include Clef Dominique Tounge of Chez Moi, Chef Greg Biggers of Sofitel, Chef Yves Roubaud of Shaw’s Crab House, Chef Tim Foley of Michigan’s Bits of Swiss, Chef Chris Pandel of The Bristol, and Audarshia Townsend, the popular Chicago food writer.

And finally, the list you’ve long been waiting for, the eight finalists chosen by reader votes:

Vincent Colombet was just a Parisian man moving to Chicago for love. His first culinary endeavor was to create a culinary and business school, Cook au Vin, in 2005. Following its success, he opened his own bakery, La Boulangerie, where bread is cooked fresh hourly.

1000 Davis St, Evanston, IL 60201, and available in several markets in the region
Opening its doors in 1938 on the North Shore, Bennison’s has been a Chicago staple since. The youngest in the family business, Jordana Downer, recently graduated from the French Pastry School. She is the third generation of Downers to work in the bakery, decorating cakes beside her brother Guy and their father Jory. Honoring the most time-honored tradition of bakery, the Downers start every day early, making the delicious fresh bread that gives them their reputation as one of the best.

Yet another unlikely combination, La Farine Bakery was born from an old biologist and his passion for bread. Rida Shahin began cooking in an attempt to recreate the bread of his childhood in the Middle East, as well as the bread his Polish wife had grown up with. After having decided to make his passion his profession, he quit being a biologist and traveled to Minnesota to study at the National Baking Center. The bakery began as wholesale in 2005 before, after high demand for retail, expanded into a store.

Owner of best baguette nominee La Fournette, Pierre Zimmerman is no novice to bread competitions. Zimmerman is “World Baking Champion 1996”. At the height of his career in Alsace, Zimmerman decided to leave the family bakery in Schnersheim, France and move to Chicago. After have taught the secrets of his profession at the prestigious French Pastry School, Zimmerman opened La Fournette, brining his family baking traditions to Chicago and achieving new career highs.

A great adventure story, Maison Parisienne came to life through the ambitions of three French friends who came to New York to go on an American adventure—and what’s more of an American adventure than capitalism? Maison Parisienne opened in September 2016 after much hard work from the founding trio: Erwan Le Nan, Styven Charton, and Audrey Naccache. Styven is the baker of the group, having studied at the Ferrandi culinary school in Paris.

Bill Millholland’s story involves quite a dramatic profession change. Originally trained in TV, he made his career change in 1998, attending the French Culinary Institute in New York City before moving to Tuscany to continue his studies. Ultimately, he returned to Chicago to teach at Le Cordon Bleu College of Culinary Arts and open his bakery, Baker & Nosh, in 2010 with his business partner Terry Groff.

Mixing love and work isn’t the best idea, unless it’s in Chicago bakery Floriole. Franco-American couple Sandra and Mathieu Holl sold their bakery-pastry creations at Chicago’s Green City Market for five years before opening their own store in 2010 in the Lincoln Park neighborhood. Sandra, from Silicon Valley, trained at the California Culinary academy. Mathieu hails from Paris, and while he has no official training, he has “an amazing palate.”

The brainchild of Julie Matthei and Ellen King, Hewn looks exactly like a bakery should. Mattei, who runs the business, had the idea of using repurposed woods and metals to create the homey, rustic-style boulangerie. King serves as the head chef; she hails from Washington state where she studied at the Seattle Culinary Academy. She worked in several restaurants before opening Hewn in Evanston, just outside Chicago.