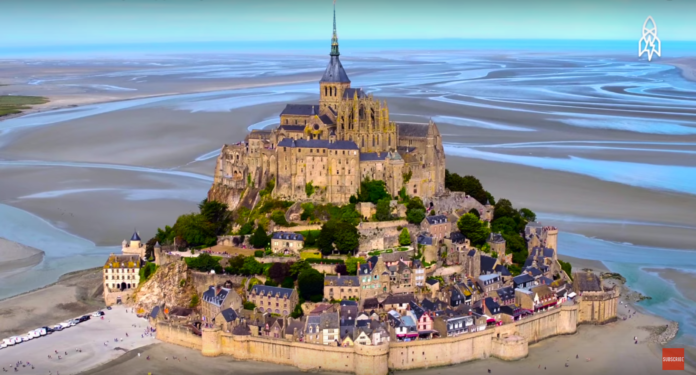 Surrounded by water the Mont Saint-Michel, a great castle-like fortress, emerges from the marshlands and ocean to pierce the sky.

Located in Normandy, Mont Saint-Michel is an abbey that has stood tall since the 8th Century AD. Surrounded by a stone wall, the abbey stands tall in the middle of sinking mud and marshlands. And when the tide comes in, Mont Saint-Michel becomes an island, surrounded by water. This made reaching the abbey on foot nearly impossible (especially in the olden days) because it was too far away for a walker to be able to make it in time before the tide comes in.

Of course, these days millions of people go to Mont Saint-Michel each year. For a while, it was no longer an island when the tide came in because a road was built so that cars could reach the abbey even during high tide. Just last May, however, the road was replaced by an arching bridge, which allowed the tide to come fully back in. Mont Saint-Michel was an island once more!

“The Art of Flaneuring” Offers a Modern Take on Being a...

Where to Take the Best Pics in Paris During the Holidays

28 Gifts Every Francophile Would Love to Get

“The Art of Flaneuring” Offers a Modern Take on Being a...

Where to Take the Best Pics in Paris During the Holidays