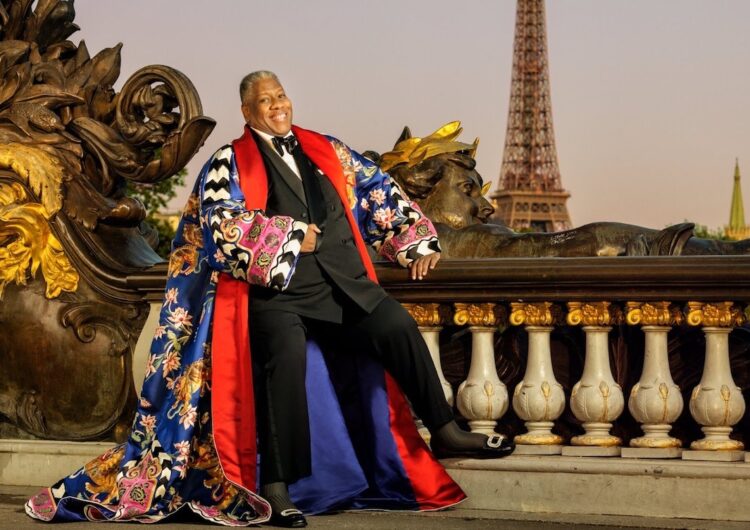 The world’s most famous fashion editor died on January 18, at the age of 73.  To say André Leon Talley wrote about fashion is like saying Picasso painted a few pictures. He was an influencer before there were Influencers, a producer, director, and stylist of iconic fashion stories, an expert celebrity wrangler (harder than it sounds), TV personality (a judge on America’s Top Model), and book author.

In photos of the Paris couture shows of the past few decades, even the most casual follower of fashion will recognize the 6’ 6” Talley, sitting beside the tiny, imperious Anna Wintour, who hired him at Vogue. He had also worked in various capacities at Ebony, Interview, and Women’s Wear Daily, but it was his tenure under Wintour that made his name. He joined the magazine in 1983 as editor of fashion news and was promoted to creative director in 1988, a position he held until 1995.

Talley’s influences were strictly French, but his story was a classic American saga. Born in the segregated Jim Crow south in 1948, André was given over to the care of his grandmother when he was two months old. As a teenager, he made a monthly trip to the white side of Durham to buy the latest issue of Vogue. Inside those pages life was beautiful, flawless, and free of strife. He scandalized his grandfather by confessing he wanted to work in fashion.

“I discovered so early that the world was cruel,” he said in a New Yorker profile aptly titled The Only One. “My mother didn’t like my clothes. Those white people in Durham were so awful. And there I was, just this lone jigaboo . . . creature. And fashion in Vogue seemed so kind. So opulently kind.”

At around the same time, inspired by an influential high school teacher, he fell in love with France and French. He majored in French literature at Carolina Central University, and went to Brown where he earned his Master’s degree. His thesis: Black women in the of poetry of Baudelaire.

After Brown, in the mid-70s, he moved to New York, and was taken under the wing of Diana Vreeland, who’d landed at the Metropolitan Museum of Art Costume Institute after having been given the boot by Harper’s Bazaar for by prioritizing her grandiose visions over the bottom line (she insisted on sending Verushka to Japan to be photographed with a 6 ft sumo wrestler – no one shorter would do!) In Talley, Vreeland sensed a kindred spirit. He spoke French. He was conversant in the history of couture, knew every important piece and the story behind it. He, too, believed in glamour, seduction, extravagance, and the transformative power of clothing. (When he was thin, he wore fabulous bespoke suits. And when he was fat, he wore princely caftans and dramatic capes.) Talley absorbed the French belief that it’s better to be provocative than boring. He was mercurial, difficult. There was nothing about which he didn’t have a pronounced opinion. Maureen Dowd, writing in the New York Times, recalls the time she attended President Obama’s second inauguration. Talley was outraged at her choice of footwear. “Rag & Bone bootees are not for going to the White House…they are for going to Starbucks.”

During the height of his reign, Talley had the ear of everyone who was anyone in the rarified and very white world of haute couture. He became friends with Karl Lagerfeld, for whom he styled the 1996 Vanity Fair shoot with Naomi Campbell, casting her as a black Scarlett O’Hara in a re-vision of Gone with the Wind. He and Lagerfeld shared a love of old movies and 18th century French fashion, and for a time Lagerfeld relied on Talley’s taste and advice when designing his collections for Chanel.

Talley once said that his life was a fairy tale, but in every fairy tale there is evil and darkness.

In The Chiffon Trenches, his 2020 memoir, he wrote that Anna Wintour dumped him for being “too old, too overweight, too uncool” and his relationship with Lagerfeld ended over a professional disagreement. When a memorial was held for Karl Lagerfeld after his death, the guest list numbered 2,500, but André Leon Talley was not invited.

In 2000, he received a Lifetime Achievement Award from the Savannah College of Art and Design. After Talley stepped away or, perhaps more accurately, was forced out of the spotlight, he devoted himself to the institution, where he sat on the board of trustees, created fashion exhibits, and encouraged and championed young artists and designers.

Last year, in April, smack in the middle of the pandemic, he received the news that he’d been named a Chevalier de l’Ordre des Arts et des Lettres, bestowed by the French government to honor those who’ve contributed to the culture of the nation. He joins James Baldwin, Tina Turner, and Meryl Streep, among others. “I am very proud to be an African American man, who grew up in the segregated Jim Crow South to receive this prestigious honor from the Republic of France. Of all the education and experiences that I have had in the world, I think this represents a great deal to my race and my people. I hope that it will make people, who look like me, really proud.” André Leon Talley loved France, and France loved him back.

Karen Karbo is the author of fourteen award-winning novels and works of non-fiction including the international bestseller, The Gospel According to Coco Chanel. Her essays, articles and reviews have appeared in Elle, Vogue, O, The New York Times, Tin House, Salon, Slate and elsewhere. She is the author of In Praise of Difficult Women: Life Lessons from 29 Heroines Who Dared to Break the Rules. In 2019 she moved to Collioure, France, where she lives with her husband and rescue dogs on “the most beautiful street in the world.” There, she hosts Come to Your Senses, a week-long all-inclusive writing retreat.