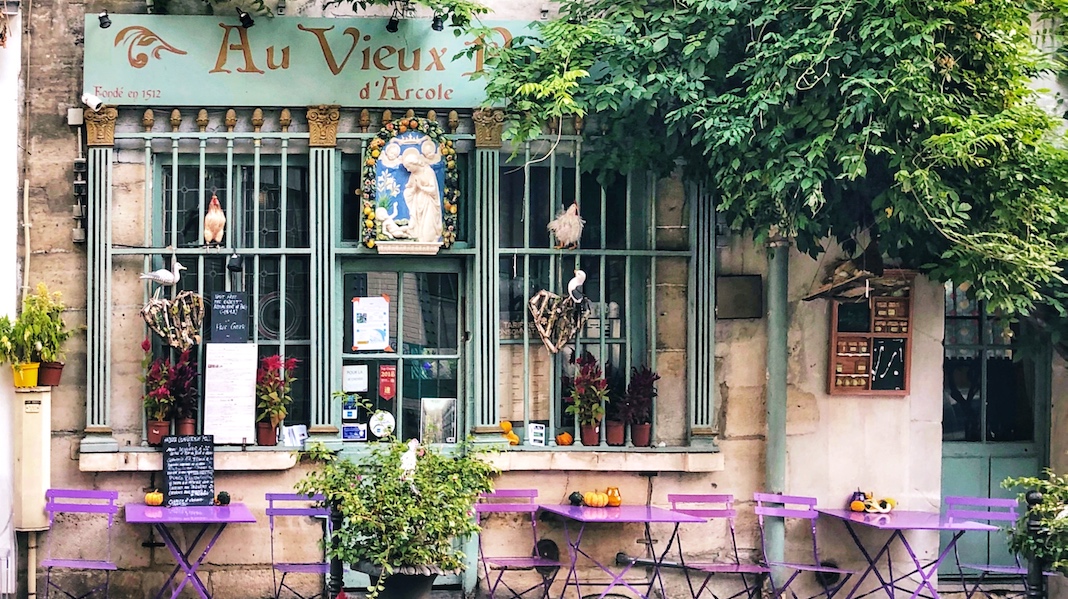 9 Instagrammable Pops of Color in Paris

The beauty of Paris is most often found in the uniformity of its Haussmannien buildings, characterized by their cream-colored Lutetian limestone structures and dark, mansard rooftops. It’s this neutral facade that makes the rare pop of color all the more exciting. Here are nine pops of color in Paris worth appreciating (and Instagramming).

This third arrondissement alleyway is worth a visit for more than just its colors. Lined with potted plants and climbing vines, passage de l’ancre is a hidden world of old facades and tranquil silence in the middle of a bustling, changing city. You won’t find stores selling antiques and vintage books like in passages couverts. There’s an atelier or two, and one exceptional store you absolutely must see: Pep’s, an umbrella repair shop that opened in 1960. — between rue de Turbigo and rue Saint-Martin

Though the ground floor of this pink building is a highly trafficked souvenir shop that eliminates the chance for a cute doorway pic, you’ll get a great shot of the building (without any tourists in the frame) by standing atop the cement base of the fence surrounding the Square René Viviani. — 5 Rue Lagrange, 75005

This court in Pigalle is so colorful, it looks like it might be difficult to play on. Bright neons fading into brighter neons in geometric patterns on the court and the three walls surrounding it (the fencing on the fourth side is painted bright blue). Ill-Studio and the fashion label Pigalle, with support from Nike, redesigned the venue in 2017. It is an actively used community basketball court (go play!) and, judging from its Instagram account, a setting for Nike and influencer photoshoots. Just make sure you don’t disturb the game or the players when you snap your pic.  — 22 Rue Duperré, 75009

The streets south of Sacré-Coeur — despite brimming with stores pushing flashy postcards, bedazzled Eiffel Tower shirts and placemats depicting Impressionist paintings — are not the most colorful in the neighborhood. At the corner of rue de l’Abreuvoir and rue des Saules, Maison Rose is an ivy-covered rose gem. Make sure to walk on rue Cortot and rue de l’Abreuvoir to pass a few other colorful Montmartre homes. — 2 Rue de l’Abreuvoir, 75018

Concept stores, galleries, cafés, independent bookstores and boutiques line the Millennial- and Gen-X-filled Canal Saint-Martin. Antoine et Lili, the colorful, floral brand selling clothing for women and children and housewares, has three bright storefronts to match their aesthetic: one in pink, one in green and one in yellow. Walk south toward the stores along the western side of the canal for the best view. — 95 quai de Valmy, 75010

There are plenty of parks and gardens in the capital, but this is something special. Les Grandes Serres in the Jardin des Plantes contain a world of green, green, and more green. Olive and sage cacti arms stand at attention, emerald Monstera deliciosa shade the pathways and forest green palm trees tickle the glass ceiling. For more greenery in the city, check out the Jardin des Serres d’Auteuil. — Allée Jussieu, 75005

Anyone looking for a good Instagram of themselves in Paris will stroll down this colorful Bastille street. It’s so popular, in fact, residents have begun posting no photos and no filming signs and blocking off doorways with the French equivalent of caution tape. Be respectful and don’t stand in anyone’s doorway (imagine how awkward it would be if the resident opened the door); your pic on this colorful side street will be just as adorable standing in the middle of the road or up against a wall. — between rue de Bercy and rue de Lyon, 75012

Running north-south in the haut Marais (upper Marais), rue Volta features an array of street art. From a many jumping in a pile of money to a woman encouraging greatness without asking for permission, it’s a mini museum of Paris’s graffiti artists. The section between rue du Vertbois and rue Notre Dame de Nazareth contains colorful murals that are definitely worth a visit, if just for an edgy wall selfie. — 83 rue volta, 75003