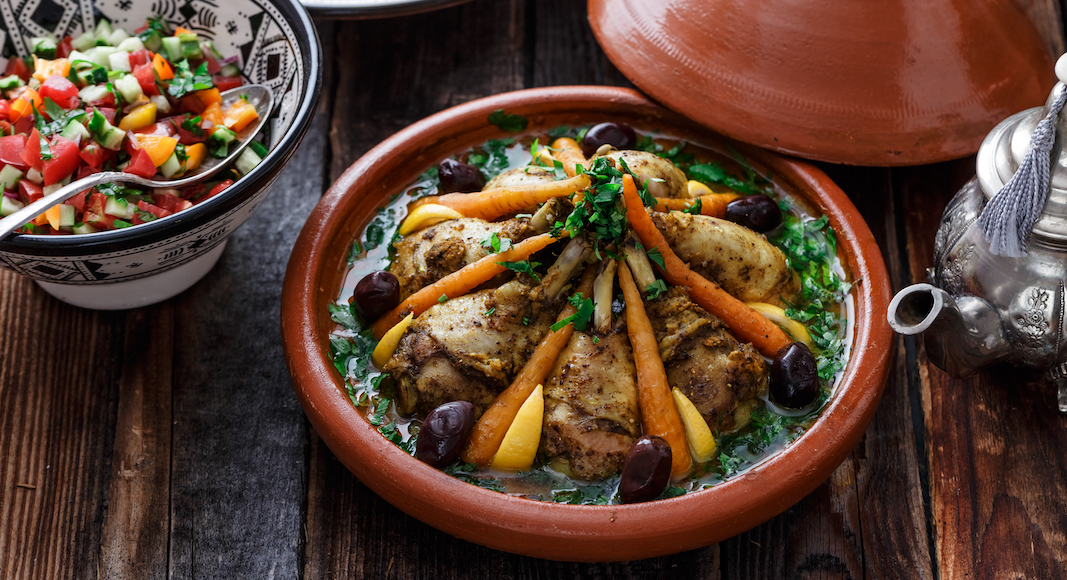 French food is classic for a reason, but sometimes, there’s nothing more fun than taking traditional French recipes and tweaking them with ingredients from around the world. Scroll through these tasty international dishes and see if something doesn’t inspire you to come up with a fusion feast of your own!

Duck à l’Orange is a classic French dish that tempers fatty duck with sweet, mellow orange. Mix it up by adding flavors of yuzu and soy sauce, along with a side of daikon and mizuna, for a refreshing treat of Japanese Duck à l’Orange.

Though French ragout is generally made with eggplant, peppers, and tomatoes, this Beninese version makes yams the star of the show.

3. Swordfish Brochettes with Basil and Harissa

This dish from Melissa Clark’s fabulous cookbook Dinner in French takes swordfish brochettes and marries them with the irresistible Tunisian condiment, harissa. The concept is simple: stuff cubes of swordfish with harissa and basil and grill or broil them until golden and delicious.

Now, we take inspiration from Santos Anne, a Mexican-French fusion restaurant in Brooklyn, and one of Covid-19’s many victims. Try making your own duck confit tacos. Try this recipe for duck confit, then serve on corn tortillas with goat cheese, tapenade, arugula, and a honey chipotle sauce.

Japan has had a long and Instagram-famous obsession with putting its own spin on French pastries. One of the most popular variations is “Matcha [insert pâtisserie or viennoiserie here].” Try making a matcha eclair for a dessert whose sweetness is balanced by the fresh, earthy, and somewhat bitter flavor of matcha.

Tagine is to the French what Tikka Masala is to the British: they didn’t invent it, but they adopted it without hesitation. This Algerian dish, often made with chicken or, in this case, lamb, came to France by way of its North African colonies. Meat, fruit, and nuts are cooked in broth and a long list of spices in a dish called a tagine (or a Dutch oven, if you’ve got one).

The Argentinian parsley sauce chimichurri is typically served on grilled steak, but it also works great with mussels. Try this recipe for chimichurri mussels and serve with fries for a twist on the French dish of moules frites. The best part? Sopping up the sauce with your fries!

BoCaphe, one of New York’s Vietnamese-French fusion restaurants, offers a Vietnamese crepe with shrimp, pork belly, shredded carrots, daikon pickles, bean sprouts, and basil. Try this pork belly recipe, this one for making easy daikon pickles, and this basic crepe tutorial to make your own.

This Indian chicken salad, served over mixed greens and julienned fruits, uses a French Dijon-based salad dressing to meld South Asian and Gallic flavors for a tasty side dish or light lunch.