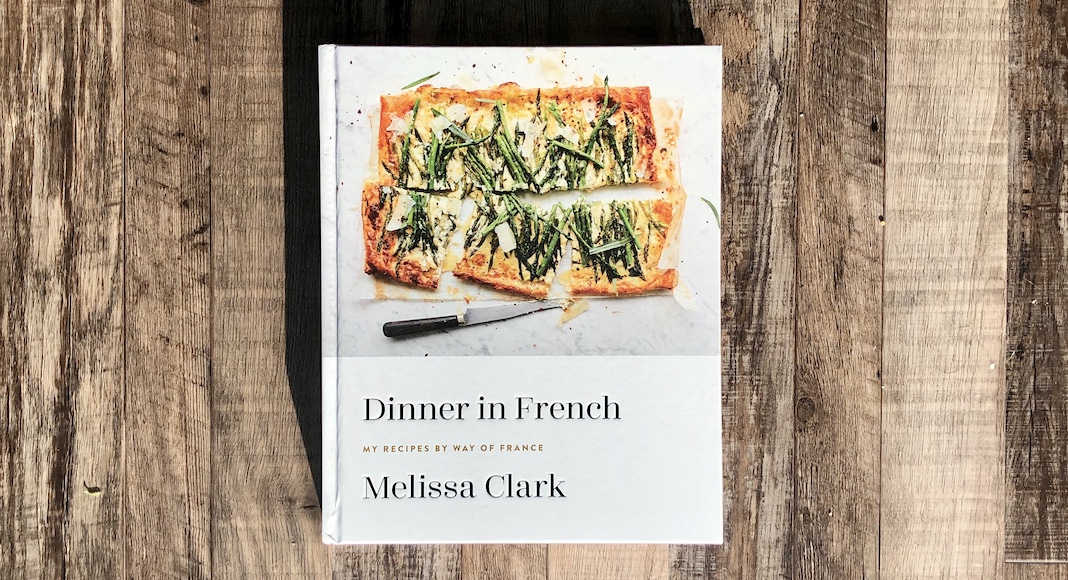 Food writer and cookbook author Melissa Clark presents a modern, culturally mixed French food in her new book Dinner in French: My Recipes by Way of France (Clarkson Potter, March 10, 2020). Clark, a regular contributor to The New York Times Cooking, grew up in a Jewish household in Brooklyn and went to France with her family each summer. As a result of that culture mixing, she writes, her mother was putting leftover terrine on challah bread and her father was spiking Jacques Pepin’s coq au vin with soy sauce. “That merging of classic French cuisine and the food I grew up eating in Brooklyn is the foundation of how I approach cooking — and the raison d’être of this book,” Clark explains in the introduction.

This culture-mixing appears in her recipes, organized as eggs, cheese, salads, soups, quiches and tarts, fish, meats, vegetables, and “after dinner,” included in Dinner in French. Fresh baked eggs with tarragon cream have received an addition of smoke salmon, potato latkes have became gruyère latkes, and tarte au fromage had the fromage blanc swapped for goat cheese and crème fraîche. There’s even a comfort-food recipe for French onion soup with grilled gruyère sandwiches. It’s this kind of creation that makes the cultural mixing clear: Clark has taken the French dish of onion soup, full of onions and topped with a wad of melted cheese, and changed it to make it resemble the American dish of tomato soup with grilled cheese sandwiches. This is the “playful and unmistakeably French” cooking Clark offers.

The staples of French cookbooks are there as well: recipes for mayonnaise and aioli, salad niçoise, pissaladière pizza, and classic brandade. “I can’t speak French, but I cook in French,” notes Clark. Indeed, there are those “effortlessly chic, company-ready” recipes, like an asparagus, goat cheese, and tarragon tarte, or melon with sauternes.

Ingredient measurements are listed in American units, except for in the baking section where grams and ounces make an appearance as well (baking is an exact science, after all). Many recipes conveniently have a sidebar for “thinking ahead,” about which elements can be prepared in advance and even stored in a fridge.

The mixing of French, Brooklyn, Jewish, and American cultures provide the peak points of pleasure derived from this cookbook. Black sesame palmiers, poule au pot pie, and jalapeño fromage fort — these are the kinds of unique, finger-licking-good creations that can only exist when you’ve grown up with that kind of cultural blending as Clark has.

Buy Dinner in French: My Recipes by Way of France by Melissa Clark here