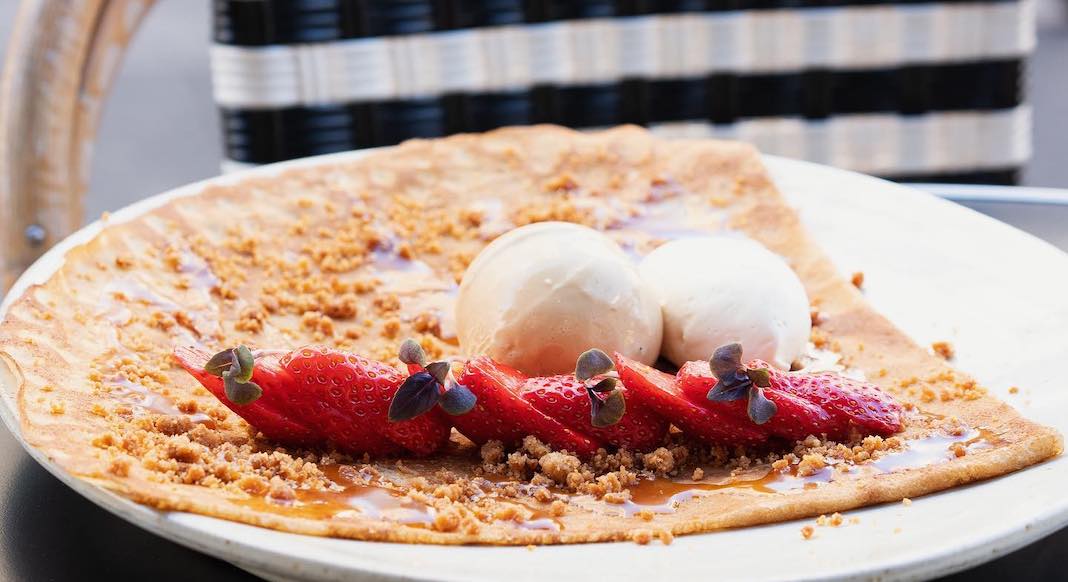 5 Places to Get Good Crêpes in Paris

One of the most difficult choices of all: deciding between the galette and the crepe, both made on the famous low-edged circular skillet. To help you decide between the savory version, made with buckwheat flour, and the sweet version, made with wheat flour, Le Point, the weekly French magazine, has revealed its five favorite spots for savoring this Breton speciality in Paris. Now all you have to do is pick with kind of cider you want to enjoy with you galette or crêpe.

Jeremiah Hory loves spreading the heritage of Breizh. The thirtysomething from Saint-Malo, France has brought together the best of products from Bretagne at Bretons. We fall for his classic, but no less amazing, beurre-sucre (4.50 euros), folded like a wallet. It’s a sweet madness made with the delicate wheat flour of the Saint-They miller, stone ground by Stéphane Moalic, the brilliant butter of David Akpamagbo’s Ponclet, and a subtle organic brown sugar. — 56 avenue de la République, 75011

If there was only one to choose, it would be this one: the mythical complète (10.50 euros) of Breizh Café in Le Marais. Crêpe-maker Bertrand Larcher, who continues to spread his restaurants all over the world — nine tables in Japan, five in Paris, three in Brittany — wins all our votes with his crispy galette topped with artisanal white ham, comté au lait cru, an organic sunnyside up or scrambled egg, and Bordier butter (choice of semi-salted, seaweed, or Espelette chilli pepper). — 109 rue Vieille-du-Temple, 75003

In their little enclave of 20 place settings located in the shadow of the Porte de Versailles, Anne-Laure Olphe-Galliard and François Gayrin excite their guests’ taste buds with la Captaine (11.50 euros). A dry and crispy “galette kraz” (dry and crusty) that smells incredible thanks to a trilogy of smoked fish (herring, salmon, tuna) from the maison of Lucas de Quiberon, accompanied by a salad of seasonal vegetables. — 14 rue de Cadix, 75015

“Crêpophiles.” They had to be pretty damn confident in their abilities to put it on their storefront, and Maxence Moscodier, Charles Balloffet, and Vincent Gouedard had no doubts about it. And neither did we after tasting the galettes bearing the names of their grandmothers and great-grandmothers. Our favorite is La Jeanine (12 euros): pan-fried andouille de Vire, emmenthal, apple, onion confit with cider, and whole-grain mustard cream. — 99 rue des Dames, 75017

He named his restaurant after a part of his childhood. Youenn Le Lay transported part of his heritage on the Île du Finistère to his store on Avenue Parmentier. The boy from Penmarc’h is daringly good with his kouigns — the Breton version of pancakes — which he creates with wheat flour from the Charbonnière mill. Don’t miss the tatin (9 euros) with apple flambé, whipped cream, praline, and salted butter caramel. — 58 rue de la Fontaine-au-Roi, 75011