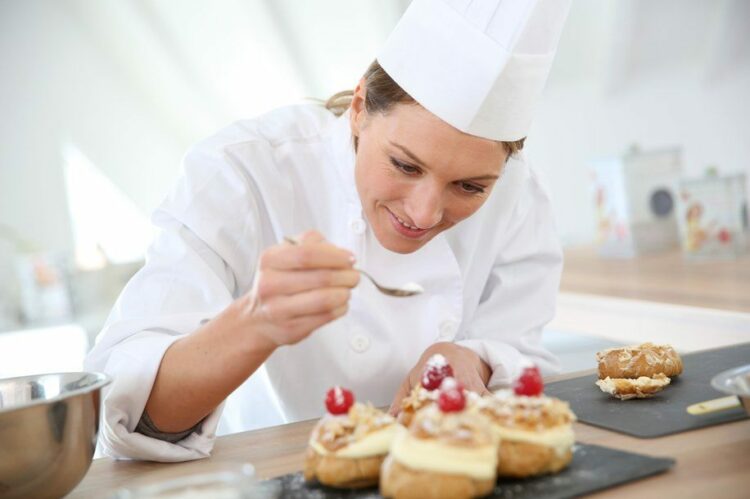 French pâtisserie is a world of its own, marked by meticulous attention to detail, jewelry-like perfection, and supreme taste. And the mixing, rolling, baking, cooling processes themselves are mesmerizing, too, as you can see in the videos that we’ve compiled below, showing artful skill and true savoir faire.

There are people who love to watch pet videos and others who can spend hours on mindless Tik Toks. Yet, I love pastry videos. What else can I say as someone who learned French by watching “Qui Sera Le Prochain Grand Patissier?“a televised competition between the best professional pastry chefs in all of France. I remember pastry chef Cyril Lignac saying “gourmant croquant” in his southern accent describing the flavor and texture of the pastry and all the priceless words used to describe pastry like croustillant. Today there is a new battalion of young pastry chefs and their main battlefield is Instagram, posting accelerated pastry-making videos. So, today, I’ve compiled a Frenchly list of our favorite pastry-making videos:

The darling, and handsome pastry chef Cédric Grolet has the kitchen swooning at the Le Meurice luxury hotel in Paris. He now owns his own pastry shop with two locations:  Cédric Grolet Opéra as well as Cédric Grolet Le Meurice. Here he displays his famous trompe-l’œil fruit pastries that resemble a well-known fruit, but are actual made of entirely pastry. Recently he has also opened a London location as well. But his true passion is still in creating masterpieces of pastries, and recording the process. In his latest video he makes a typical lemon tart with lime, and of course it’s not a very typical one featuring precise piping and jellies. Yum! Just in time for spring!

The French chocolatier Amaury Guichon loves to wow audience with his lifelike creations executed entirely in chocolate. Today he owns his own school of chocolate in Las Vegas and is the star of Netflix hit-series “School of Chocolate.” But the Franco-Swiss chef continues to challenge himself, this time with new creations and videos that he posts on a weekly basis. The Water Lily features quite a bit of chocolate as well as a pastry element to it. And we can’t stop watching!

Fou de Pâtisserie is a special kind of bakery with exclusive pastry designs like nowhere else. It takes baking to a whole new level, one reserved for the gods. The Fou de Pâtisserie adventure began in 2013, when Muriel Tallandier and Julie Mathieu, independent publishers, had the idea of ​​creating the very first French magazine exclusively dedicated to the world of pastry. They wanted to offer readers recipes from the best of the pastry world. They succeeded, with 40,000 copies of the very first issue sold. Buoyed by the success, the duo put their idea into a pastry shop, similarly bringing together the best of haute pâtisserie. Today, their three storefronts in Paris feature some of the best fresh desserts prepared by prestigious Parisian pastries as well as chocolates, confectionery and biscuits. In a single space, you can bite into a Mont Blanc from Angélina, a macaron from Pierre Hermé, a fruit tart from Hugo & Victor, and discover new and up-coming chefs as well.

Pâtisserie journalist @ParisChezSharon has the best job in the world, I think. Though I might be biased, and her 599k followers seem to think so as well. She has visited all of the best French pastry chefs behind the scenes at their kitchens, and watched them make magic. While her channel is full of scrumptious videos that make you so hungry, this video of chocolatier Julien Dechanaud‘s mushroom is a cult favorite. It has exactly everything that one may ever want in a dessert: chocolate, praline, caramel, decadence and whimsy!

One of the winners of “Qui Sera Le Prochain Grand Patissier?”, Nina Metayer was also twice awarded best pastry chef in France for her work alongside Jean-François Piège at his 2-Michelin star restaurant “Le Grand Restaurant.” Today she continues to bake at her bakery in Paris called Délicatisserie  alongside her adorable daughter. In this video, Metayer shows us how to make a French apple turnover, a true breakfast delicacy made with puff pastry and compote.