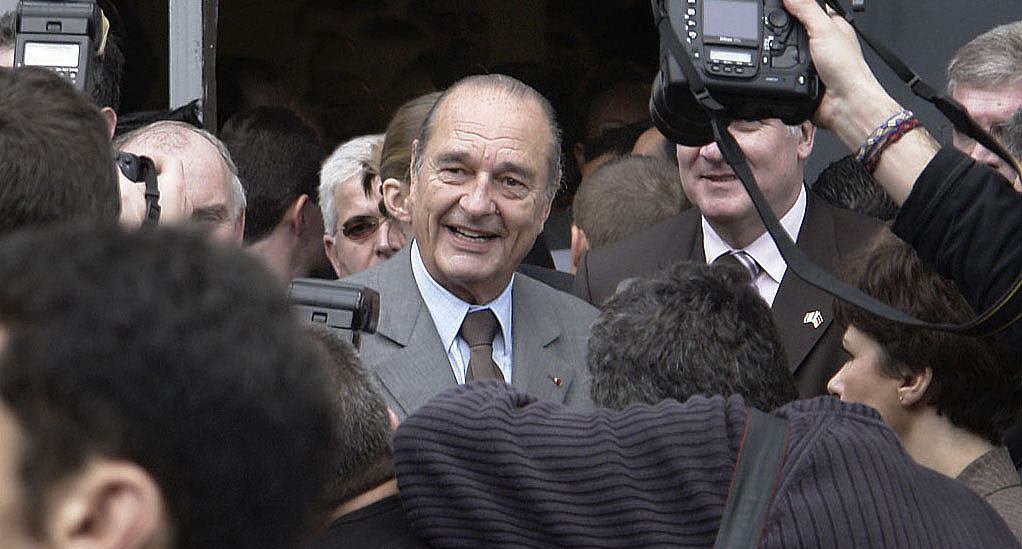 The former President of France Jacques Chirac died Thursday, September 26, at the age of 86. His son-in-law told the AFP that Chirac died “peacefully.” He was president from 1995 to 2007 and is remembered generally positively by the French, though his political legacy is more mixed. Here are 14 things to know about the French leader.

1. He had one of the longest political careers in Europe

Chirac served twice as president, twice as prime minister, and 18 years as mayor of Paris.

2. Chirac is one of the most popular presidents

In a 2015 poll, Paris Match found that 33% of people named Chirac as their favorite president. 21% chose Francois Mitterand, 17% chose Charles de Gaulle. Georges Pompidou and Valéry Giscard d’Estaing each came in with 8%, followed by Nicolas Sarkozy at 7%, and the current president at the time, François Hollande, was last with 5%.

3. Chirac led the opposition to the war in Iraq

When, in 2003 as French president, he made his objections to the war in Iraq known, his approval ratings in France soared to 90%.

4. He’s the first president to acknowledge France’s role in the Holocaust

In 1995, Chirac said that the “criminal folly” of the German occupation was “assisted by the French people, by the French state” to send some 75,000 Jews (French and non-French) to death camps during World War II. Chirac’s vocalization of this served to lift a taboo around saying that France’s Vichy regime had worked with the Nazis. His apology was the first time a postwar French head of state had acknowledged France’s role.

5. Chirac took a class at Harvard and worked at Howard Johnson’s

While taking a summer class at Harvard in Cambridge, Massachusetts, in 1953, Chirac worked as a dishwasher, then counterman, at Howard Johnson’s. Chirac even claimed that he met the Howard Johnson, who offered to write Chirac a reference. (Chirac was fluent in English)

6. He got engaged to a Radcliffe student

According to Bloomberg, she was a Southern belle who called him “honey pie” and drove a pink convertible. The woman’s father, far from happy, wrote him an angry letter telling him to get lost… and so he did, going to California then Louisiana, where he wrote about the development of New Orleans’ harbor.

Military service had been compulsory in France for two centuries, but Chirac decided it was time for a change after the country struggled to find 10,000 qualified French soldiers for the Gulf War. At the time, the total number serving in the military was about half a million, and Chirac’s changes in 1996 reduced it to 350,000.

8. The Musée Quai Branly is named after him

Following in the footsteps of previous presidents who built museums as monuments to their time in office (Pompidou with the Pompidou, d’Estaing with the Musée d’Orsay, Mitterand with the Grand Louvre), Chirac focused on the Musée Quai Branly, which celebrates the arts of the Americas, Africa, Asia and Oceania. (Chirac had a particular passion for Japanese art.) In 2016, the museum was renamed the Musée Quai Branly Jacques Chirac.

9. He won his second presidential term with 82% of the vote

France’s system of two-round voting proved its worth. In the first round, the vote was split three ways between Chirac (Rassemblement pour la République), the far-right Jean-Marie Le Pen (Front National), and Lionel Jospin (Parti Socialiste), who was expected to face Chirac for the presidency but failed to get enough votes. Chirac and Le Pen moved on to the second round of voting, and voters, fearful of Le Pen’s extremist positions, gave Chirac 82% of the vote.

10. He was convicted of embezzlement

Many years after his tenure as mayor of Paris, Chirac found himself in court for actions taken during his mayorship: under Chirac, the city had paid some $1.8 million in salaries to his political allies who held fake jobs. He was convicted of embezzlement in 2011 and misusing public funds to finance his political party. He received a suspended prison sentence and didn’t appeal the conviction.

12. He once said of Britain, “You can’t trust people who cook as badly as that”

Chirac had a notorious temper. In 1988, at a French-British summit, he had an outburst at Prime Minister Margaret Thatcher that was so obscene, the next day’s edition of the British tabloid The Sun had the headline “Say Sorry, Rude Frog!”

13. He changed the presidential term of office from seven years to five years

Chirac enacted the constitutional change in 2000 in an attempt to avoid future splits in power between the left and right (parliamentary and presidential terms were, at the time, not aligned), and to improve his chances of winning reelection (which he did).

“A beer-drinking, Gitanes-smoking man of the people who was able to eat five lunches in one afternoon on the election trail,” wrote the Guardian. He was “a president who goes jogging, a president who rides a Vespa,” Pascal Perrineau, a professor of political science, told The New York Times.