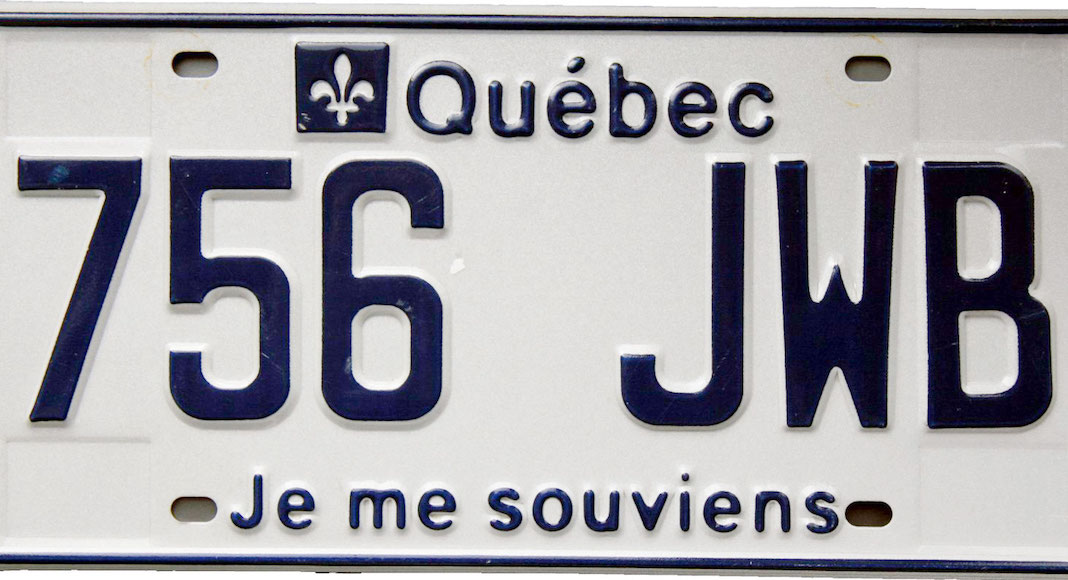 Why do Quebec license plates say “Je me souviens”?

License plates hold a certain intrigue to many Americans, no doubt because of the license plate game. Rolling down Route 1, kids are told to keep their eyes peeled for Alaska’s “The Last Frontier,” Hawaii’s “Aloha State,” and, of course, the “Je me souviens” of Québec. This white license plate accented with the blue fleurs-de-lys reminds us all that “I remember,” or really, the Québeçois remember. But what are they supposed to remember?

The origin story begins in 1883, when the architect Eugène-Etienne Taché was designing his plans for the Palais législatif du Québec (the modern day Assemblée Nationale). At the main entrance of the parliament, he had “Je me souviens” carved into the stone below the Québec coat of arms, which he also designed. Excited by the phrase, city authorities quickly adopted it, and it became a part of the official Québec coat of arms in 1939. The Lévesque administration went a different route in 1978, replacing the “Je me souviens” motto with “La Belle Province,” meaning “The Beautiful Province,” though it didn’t quite stick in the same way. That motto is used mostly as a nickname and for tourism ads.

As for determining what we’re supposed to remember, the problem is the that no one made the effort to give it an official, specific meaning.

The diverging opinions on interpretations further split when Hélène Paquet, a granddaughter of Eugène-Etienne Taché, spoke out about the meaning in 1978. In an op-ed in The Montreal Star, she wrote that “Je me souviens” was not the complete phrase. According to her, what her grandfather intended to write was “Je me souviens / que né sous le lys / je croîs sous la rose” (“I remember / that born under the lily / I grow under the rose”). As uniting as this explanation might be, historian Gaston Deschênes has said that it’s false. According to him, Taché did write all of those words, but “Je me souviens” and “Né sous le lys, je grandis sous les roses” were written during two different moments and were never meant to be put together.

Going back to the time at which the motto was carved is where the true meaning reveals itself. Though Taché never offered any extensive explanation for the motto, he did write a note to deputy commissioner of Public Works in 1883 explaining what he hoped to do with his architectural designs. In that letter, he wrote that he wanted to evoke “l’ensemble des souvenirs” (“the entirety of memories”) in the façade of the parliament building. Essentially, Taché wanted to make a monument to the memory of the heroes of Quebec’s history. The military generals, explorers, qu’ils soient militaires, explorateurs, indigenous peoples, government leaders of both the French and English regimes, and others, as well as a few empty spaces where future greats could be added.

So next time you’re stuck in traffic on the GW Bridge and see one of those white and blue plates with the fleurs-de-lys telling you to remember something, remember Jacques Cartier, Champlain, Maisonneuve, and all the other essential figures of Québecois history. Think of them and you’ll probably be respecting the intentions of Taché. Although, if you prefer to align your interpretation with the Anglophone journalists, seeing the motto as a jab at Britain, then you’re in good company with French expats in Canada and many other Québecois!