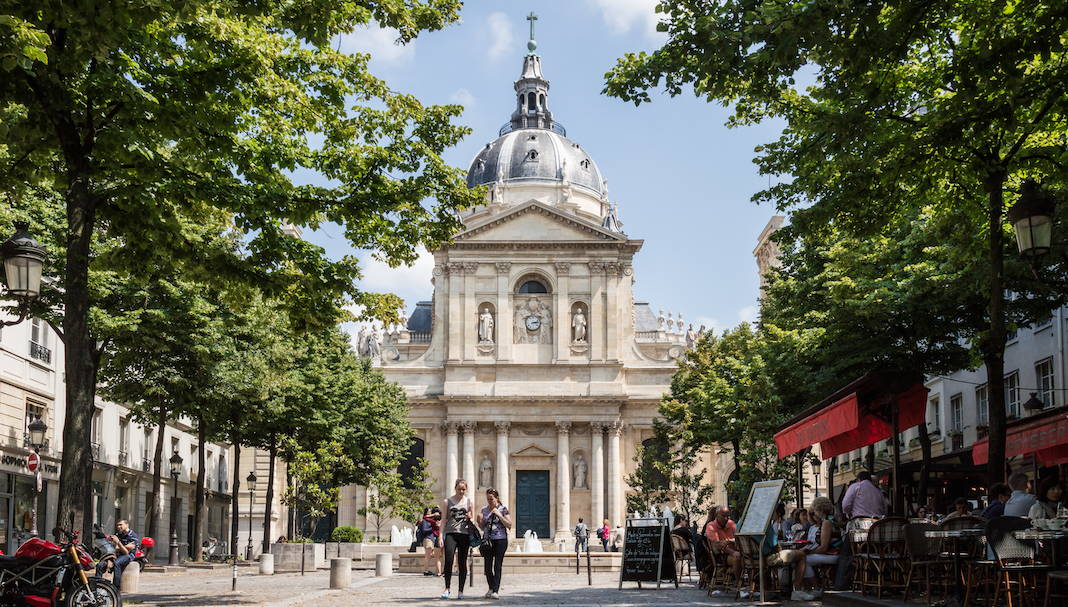 As the world becomes increasingly globalized, more universities are feeling the pressure to market themselves to international students. This means that there has never been a better time to be a native English speaker in Europe. Most universities in France now have at least a couple of options for Anglophones who want to study entirely in English. Here’s a shortlist of some of the schools across France that offer the greatest number of English language degree programs. (Note that costs included are calculated at a rate for non-E.U. students. Most universities offer a much lower rate for French students and students from within the European Union.)

Many French universities manage to execute successful English-language programs by joining forces with foreign universities to create Dual Bachelor’s and Master’s Programs like the several offered at Sciences Po. Some of Sciences Po’s consistent collaborators are Columbia University in New York, University College London, University of Hong Kong, and University of Sydney, among many others. Most available undergraduate English language courses are social sciences (Europe-Asia, Europe-North America, and Middle East and Mediterranean studies), while business and management account for one of the largest groupings of graduate programs. Sciences Po has campuses in Le Havre, Dijon, Menton, Nancy, Reims, and Poitiers, but their main campus is right in the heart of Paris. Students from outside the EU can check this page on the university’s website for scholarships that might be applicable to you.

The mountain range after which the university is named plays a huge part in any education received at the Université Grenoble Alpes, whether you’re studying an English-language Master’s program in earthquake engineering and engineering seismology, or taking their two-month French Alps Program. In addition to their graduate level courses, they also offer a few undergraduate degree programs taught partly in French, partly in English, in biology, chemistry, and physics.

The university even offers a selection of short-term and summer programs, for those looking to fit study abroad into a busy academic or seasonal employment schedule. Costs are minimal, but be warned that if you are applying after a gap of more than two years in your education, you will be subject to an additional 2,500 € fee.

The majority of French universities offering programs in English are engineering schools like Centrale Nantes, one of the five members of the Ecoles Centrales Group of French engineering universities. This particular school, in the Brittany region of Northern France, has an impressive collection of 16 English-language programs in the fields of engineering and technology. So if you’re shooting for a degree in advanced robotics or hydrodynamics in ocean engineering, you’ve come to the right place.

As it turns out, the region of Bordeaux has a lot more to offer to foreigners than some good vineyard tours. The Université de Bordeaux offers a number of Master’s programs taught 100 percent in English, with a focus on biology, neuroscience, and agriculture. Although, of course, it does offer a Master’s in wine tourism innovation.

The Sorbonne might be the most famous French university, but it isn’t really a university, it’s a general term to describe the 13 Parisian colleges considered to be the Universities of Paris. And one of these, the Université Paris 1: Panthéon Sorbonne, has quite a few English-language Master’s programs, mainly in economics and law. You will need to look into each program individually, however, as some programs are listed only because they are “partially taught in English.”

Though not a French university, the American University of Paris is always an option for those wanting a “classic American college experience,” Left Bank-style. Choose from the usual slate of majors and minors: journalism, linguistics, and computer science, among dozens of others. As a school with an “international” brand, most of AUP’s grad programs are based around fields like international management, international affairs, and international law.