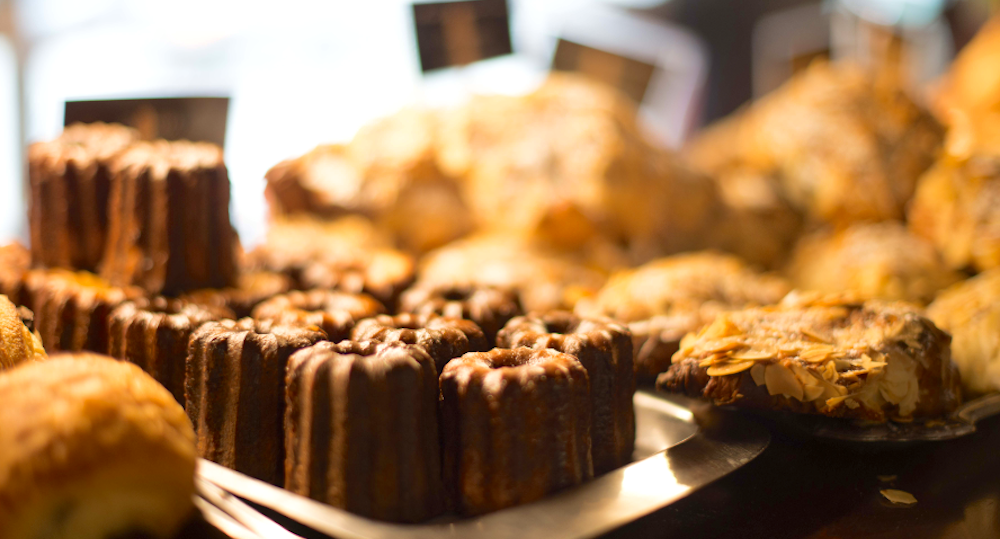 Where to Get the Best Cannelés in Montreal

Soft to the core, with a crunchy, caramelized exterior, the cannelé is a unique and beloved French pastry. With its pronounced vanilla and rum flavors, it’s a delight to find this little piece of Bordeaux in the vast expanse that is Canada.

But first, is it “cannelés” or “canelés”? It’s both! For “cannelé,” the spelling would come from its mould with “cannelures” (grooves) giving the pastry its unique shape. Although its origins are not well known, many believe that this recipe comes from the nuns of the convent of Annonciades in Gironde. In the 18th century, they were said to have been called “canelats”, a word from Gascon, before disappearing and reappearing two centuries later. In the inter-war period, the “can-nelé” regained its nobility in Bordeaux, and it was in 1985 that the Confrérie du Canelé de Bordeaux chose to remove the second “n” from the name. The canelé, with only one “n,” then becomes a collective and registered trademark.

In any case, when it comes to cannelés (or canelés), pastry chefs all have their own tricks to make this Bordeaux delicacy a cut above the rest. At De Froment et de Sève, there is no question of making cannelés any way beside the traditional method: “We brought real cannelés moulds from Bordeaux, made of copper, allowing for this specific kind of bake: a cannelé that’s crunchy on the outside and soft on the inside.” Another important step: “knowing your oven,” adds the Point G shop. The pastry’s quality also depends, as with all good pastries, on the choice of ingredients and the carefully considered ratio of vanilla and rum — which every pasty chef keeps a secret. “What I often dislike about cannelés is their rubbery texture, they are often too soft. You have to look a little harder to find a very good one,” explains the manager of Café L’étincelle.

We set out to find the best cannelés in Montreal — soft yet caramelized. Here are our favorites.

The success of De Froment et de Sève cannelés is largely due to their cooking in copper moulds straight from Bordeaux. The result: a perfectly uniform bake and a delight to taste. In addition, “the quality of the butter and a recipe that is one of our little secrets,” the manager told us. Cost: $2.20 — 2355 Rue Beaubien E

If you want to push through Mamie Clafoutis‘ doors, one piece of advice: do it early. With only about fifty cannelés produced each day, few are lucky enough to be able to taste them in the afternoon. Not to mention the big orders — we saw one person by 18. Cost: $2.65. — 3660 Rue Saint-Denis, Montréal These are the baby cannelés offered up by the new kids on the (Beaubien Est) block. Established less than six months ago, the amazing Restaurant Saison pastry shop-slash-restaurant offers a trendy yet refined range of pastries. You’ll find the cannelés beside the equally good financiers. The secret to the cannelés? “They are made with a lot of love, of course.” Make sure you get enough to satisfy your craving. Cost: $0.75 (remember, they’re mini). — 51 Rue Beaubien Est

At Point G, the customer is always right. “Our customers prefer simple golden cannelés. So we had to adapt and change the way we mix the dough to delay caramelization. The quality of the ingredients used is also what makes the difference: fresh eggs, unbleached flour, vanilla pods, quality rum… In short, it takes a lot of love!” Cost: $2.25 — 1255 Avenue du Mont-Royal Est

The reputation of the pastry chef is well established, so it’s only natural we would want to taste the cannelés of Christian Faure in his Old Port shop. The recipe has fantastically pronounced flavors. The cannelés of Maison Christian Faure have a particularly crispy shell — perhaps too crispy for some — which taste intensely like rum and vanilla. And if you buy six cannelés, the store covers the taxes for you! Cost: $3.20. — 1225 Boulevard de Maisonneuve Ouest

Lost in the middle of the mountain of donuts that have given the pâtisserie its reputation, the cannelés have still managed to carve out a pretty place for themselves in CRémy‘s window. The establishment offers cannelés that are more crunchy than squishy, with subtle aromas of rum and vanilla. Eating just one will make you want more. Cost: $2.50. — 2202 Avenue du Mont-Royal Est

This article was originally published on Maudits Français