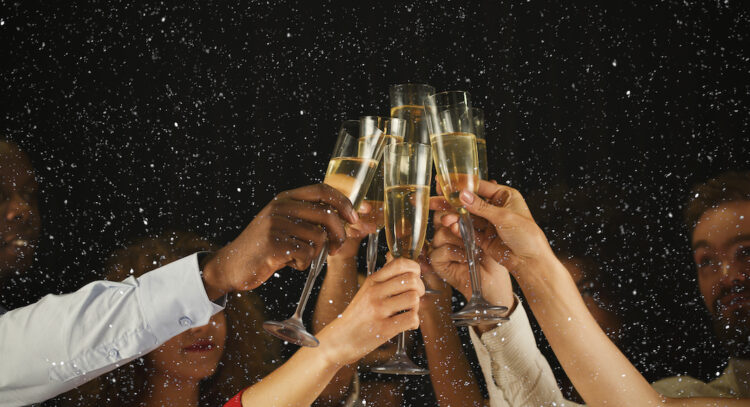 New Year’s Eve is synonymous with two things: overpromising on resolutions for the coming year, and popping bottles of Champagne. But 2022 has been a wild ride. We partied hard enough to make up for two years of lockdown, and drowned out warnings of a coming recession with $20 martinis and caviar bumps. Some of us are now looking at our credit card statements and wondering how we’re going to afford a bottle (or several) of bubbly to ring in the new year.

I’d suggest, instead of blowing $50+ on a bottle of Moët, try for a crémant instead. The best kept secret of French winemakers is this sparkling wine, which is made throughout France using the same second fermentation process as Champagne, but for a fraction of the price. I spoke to Champagne expert Cynthia Coutu, founder of the women-only sparkling wine club Delectabulles, to learn more about this fascinating wine.

Champagne is famous for the rigid rules that designate how, when, and where it can be made, but these strict requirements guarantee quality (and a higher price tag). Grapes grown in the cold northern region of Champagne develop a lower sugar content than those grown in warmer regions, resulting in Champagne’s quintessential mouth-puckering acidity. Champagne must be fermented according to the méthode traditionelle. After a first fermentation at harvest time in September, and blending and bottling as of January 1st, it goes through a second fermentation in the bottle where it remains in contact with yeast for a minimum of fifteen months, under six bars of pressure (about three times the pressure in a car tire!), which creates Champagne’s characteristic intense fizz.

Like Champagne, crémant is subject to certain AOC rules and regulations. It is also produced using the méthode traditionelle, but needs to be fermented for a minimum of nine months instead of fifteen. This results in a wine that is generally fruitier than Champagne, but less fruity than something like prosecco, which is fermented according to a completely different process known as the tank method. “The less time a wine spends in contact with the dead yeast, the more fruity it’s going to be,” explains Coutu. “The more time it spends aging in the cellar in contact with the yeast, the more complex toasty brioche notes you get, which are typical of Champagne.”

Crémant varies in its flavors and aromas depending on the grape varieties used, and where they are grown. There are eight AOC regions in which crémant is produced: Alsace, Bordeaux, Bourgogne, Die, Jura, Limoux, Loire, and Savoie. The largest of these producers is Alsace in the northeast corner of France, which sells 32.9 million bottles per year, though Burgundy and the Loire certainly pull their weight in both quantity and quality.

“In the Loire, Burgundy, Alsace, where it’s colder, the crémants will be more crisp, have more acidity. The ones in the South of France will be rounder and less acidic,” closer to Spanish cava, Coutu explains (which also uses the méthode traditionelle). Bordeaux crémants fall somewhere in the middle. “They’re pretty crisp.”

“The big difference between all the crémants in France is the type of grape varieties used,” she continues. “A Crémant de Bourgogne uses almost the same grape varieties as Champagne. They use Chardonnay, Pinot Noir, and Aligoté. So you can get a crémant that’s 100% Chardonnay, which is similar to a Blanc de Blanc Champagne, except it’ll be a lot fruitier, because it only spends about nine months aging in the cellar, versus fifteen months.”

The cost of crémant

The low cost of crémant compared to Champagne doesn’t have to do solely with name recognition or quality. “You’re probably wondering why crémant is so much cheaper. There are several reasons. One is the cost of the land where the grapes grow. So, for example, in Champagne, in an average wine village, the land costs a million euros per hectare. It’s a hell of a lot cheaper in the Loire, or the Languedoc. So if the land is cheaper, the price of grapes per kilo is therefore cheaper. And the third reason is, generally speaking, it spends less time aging in the cellar. And time is money.”

There are some crémant producers who approach the product as a convenient bonus, using their best grapes to make still wine, and reserving their second grade grapes for crémant. But others, like Vitteaut-Alberti in Burgundy, run by Agnès Vitteaut, focus only on crémant, using their best grapes and aging for two or three times the required amount of time. As a result, “[Vitteaut’s] crémants are closer to the taste and aroma profile you’d get from Champagne.”

What foods pair well with crémant?

Fatty foods like cheese or potato chips pair well with crémant, since the acidity of the drink balances out the fat. “If it’s a Crémant de Bourgogne with only Pinot Noir in it, I’d say something with truffles, something earthy, a sausage. Truffled sausage is even better.” For Pinot Noir, Coutu encourages you to think of what you would serve with red berries, like meat, turkey, or roast chicken. “But if it’s a crémant from Alsace that has Chardonnay, I’d say go for oysters or caviar. Chardonnay has citrus flavors and aromas. So anything that you would squeeze lemon juice on, like fish and chips or oysters.” As for the Loire? “In the Loire they have crémant de Loire, and then they have Vouvray, which is 100% Chenin. That almost goes with anything. Fish or meat. Chenin is basically a sommelier’s dream, because it’s this really versatile grape.”

Why are people paying attention to crémant now?

“I think there’re a lot of sommeliers out there and wine influencers that are starting to realize, ‘Oh, you can find a lot of good crémants out there,’ and are promoting them. I’d say maybe in the wine world there are more people looking into it as a valid option.” Locals in France, Coutu says, have always had a “soft spot” for crémants from their own regions.

But there might be larger factors coming into play that could bode well for the international crémant market. “When the financial crisis hit in 2008-2009, people had less money to buy Champagne, so they started looking for more affordable options. That’s when Prosecco became a star, especially with the Brits… Now, you know, with inflation and the energy crisis and everything going nuts, people might start looking into affordable options again.”