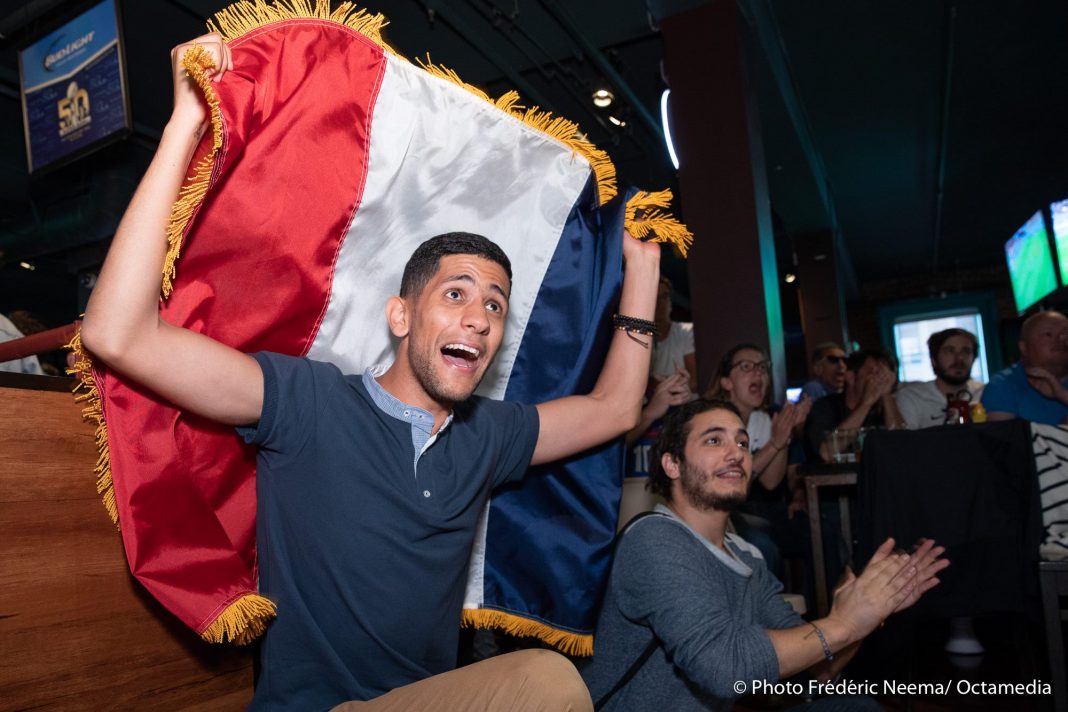 Where to Find French Fans

At the Golden Gate Tap Room, near Union Square

100, 300, then 450 Les Bleus fans gathered on two floors in this Union Square bar for the last three games. The Club des Supporters de l’Equipe de France hopes to gather the troops again starting at 7am on Sunday. The maximum capacity of the bar is 565 people, and an entrance fee of $5 (cash only) will be charged. Unfortunately, children under 21 are not admitted and ID is mandatory.
Golden Gate Tap Room, 449 Powell St, San Francisco, CA 94102. (415) 677-9999. Website.

At Café Bastille, in the Financial District

Faithful to their heritage, Café Bastille will broadcast the final at 8am. There will be a giant screen installed in the main room as well as on the terrace, so you definitely won’t miss a second.
Café Bastille, Belden Pl, San Francisco (415) 986-5673. Website.

At La Bohême in Palo Alto

This French restaurant on California Avenue will open at 7:45am for the start of the game at 8am. Coffee and croissants will be offered before the kitchen opens at 9am for a brunch of champions!
415 California Ave, Palo Alto, CA 94306. (650) 561-3577. Website.

Other non-French-dominated places to watch

The broadcast of the final match in front of San Francisco City Hall always attracts a large and passionate soccer crowd. So we expect thousands of fans this Sunday to cheer on the French team! Soccer activities and a climbing wall will be offered to the children. Food trucks will be on site to feed the hungry.
Civic Center Plaza, Grove and Larkin, San Francisco, CA 94102. Website.

At Spark Social, in Mission Bay

With an impressive number of screens, crispy chicken wings, and a wide selection of beers, SFAC is sure to attract crowds for the finals. Alcohol will be flowing starting at 6am!
SFAC, 1750 Divisadero St. (415) 923-8989. Website.

At Chieftain, in SOMA

At the Irish pub par excellence in the heart of SOMA, it may still be early for fish’n’chips, but a good Guinness will quench the thirst and stress of this ultimate soccer encounter.
198 Fifth Street, San Francisco, CA 94103. (415) 625-0436. Website.

At Kezar Pub, in Cole Valley

True to its reputation, Kezar Pub, located just steps from Golden Gate Park, has broadcast all of the World Cup matches, and will therefore be ready to welcome fans of Les Bleus (and Croatia) this Sunday at 8am.
Kezar Pub, 770 Stanyan St, San Francisco 94117. (415) 386-9292. Website.

At Avaya Stadium in San José

For the final on July 15, there will be food trucks, bouncy castles, and other entertainment. You can head there dressed as Mbappé with his #10 jersey, or put on your colors there thanks to the make-up stations.
Avaya Stadium, 1123 Coleman Ave, San Jose, CA 95110. Website.