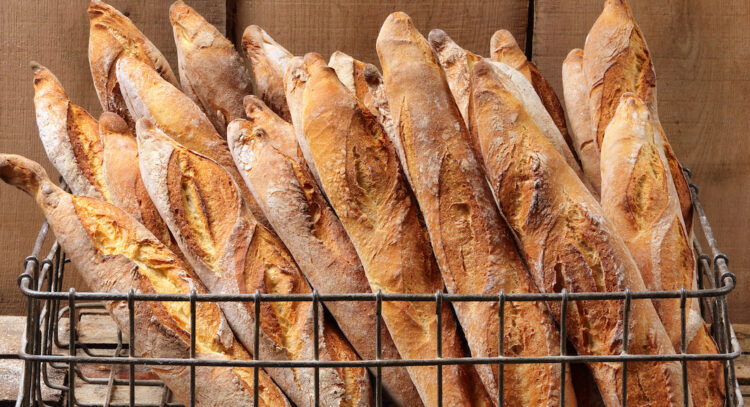 What’s long, pale, and brings every French person joy to put in their mouth? The latest recipient of UNESCO’s “Intangible Heritage” status. No! It’s not what you’re thinking. You are fresh! It’s the French baguette, of course.

The award is a way of honoring traditions, rituals, skills, performing arts, forms of craftsmanship, and social practices that contribute to a sense of community passed down through generations. “The importance of intangible cultural heritage is not the cultural manifestation itself but rather the wealth of knowledge and skills that is transmitted through it from one generation to the next,” according to UNESCO’s website.

French gastronomy in general received the honor in 2010, ruffling some Bresse feathers over the vagueness of the category. So it makes sense that the current ballot would skew highly specific. Also originally under consideration by the French government for nomination were the zinc roofs of Paris and a wine festival in Arbois, both of which easily gave way to the prominence of the baguette. The award recognizes the “savoir-faire of artisanal bakers” and “a daily ritual” of going out to buy a baguette, says U.N. cultural agency chief, Audrey Azoulay.

French president Emmanuel Macron responded to this incredibly French piece of news by posting a photo of a young boy with a baguette on Twitter, calling the bread, “250 grams of magic and perfection in our everyday lives.” 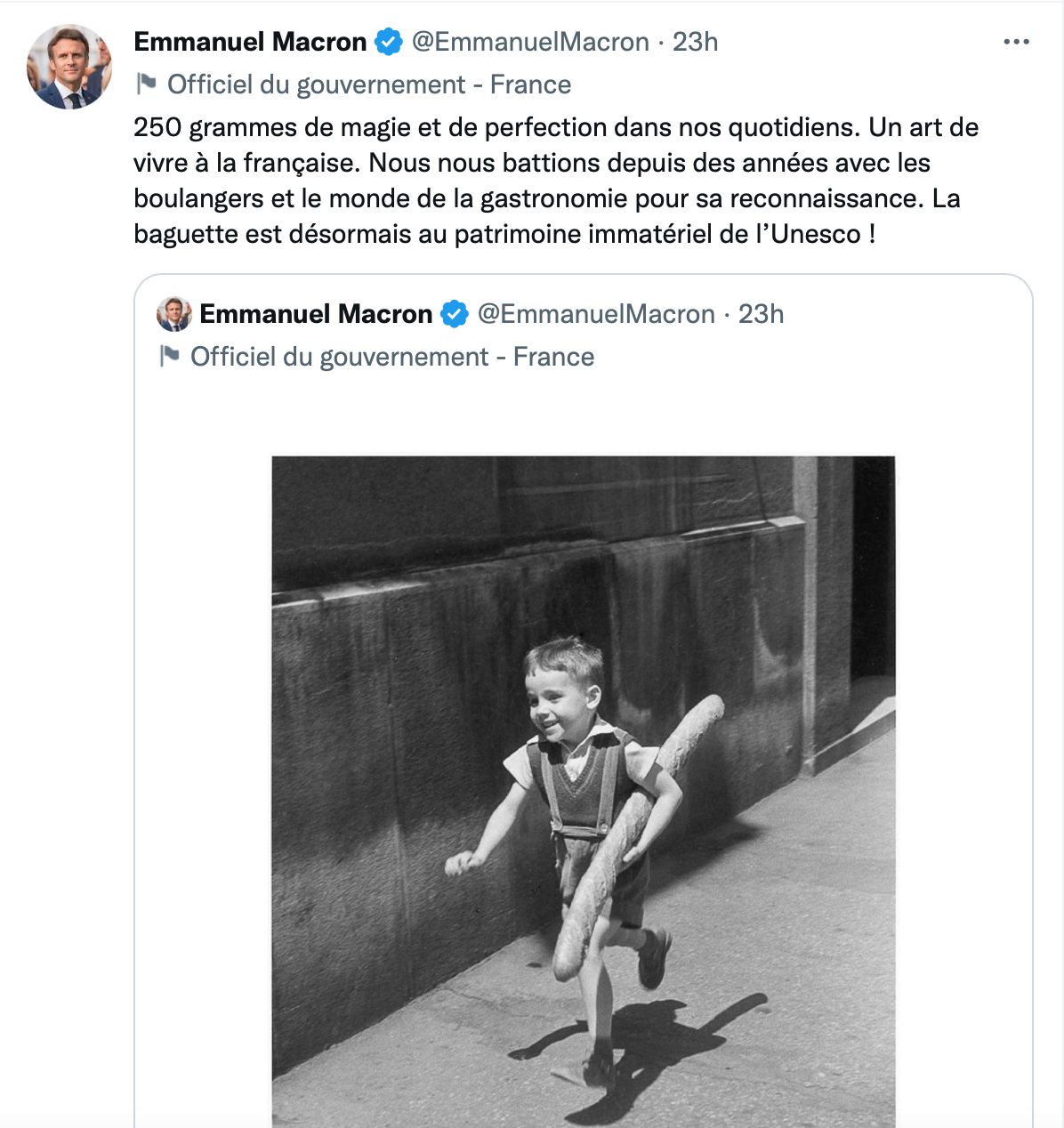 According to the National Federation of French Bakeries, more than 6 billion baguettes are baked in France per year, from a simple combination of flour, water, salt, and yeast. But since 1970, the number of artisanal bakeries in France has dropped from 55,000 to 35,000, with an average of 400 closures per year. Hipster culture can largely be blamed for this (as it can for most things). The popularity of sourdough bread has risen amidst our collective fermentation fascination, and a rising gluten-phobia has made a bogeyman out of bread. But the true villains in this bataille boulangère are the supermarkets offering discount deals on subpar baguettes, crowding out the old guard. After all, who needs hundreds of years of traditional craftsmanship when you can buy your bread at a store that also sells dog toys and detergent?

Every year, the Confédération Nationale de la Boulangerie-Pâtisserie Française hosts a competition to declare the best baguette in France, though many cities host their own competitions. This year’s winner was from a small town outside of Reims, which is a far way for the Confédération to travel for a piece of bread. Though it does sound almost like the set up for a Hallmark movie about a high-powered corporate bread judge who finds love and the meaning of Christmas in a quaint rural boulangerie, it’s actually true. 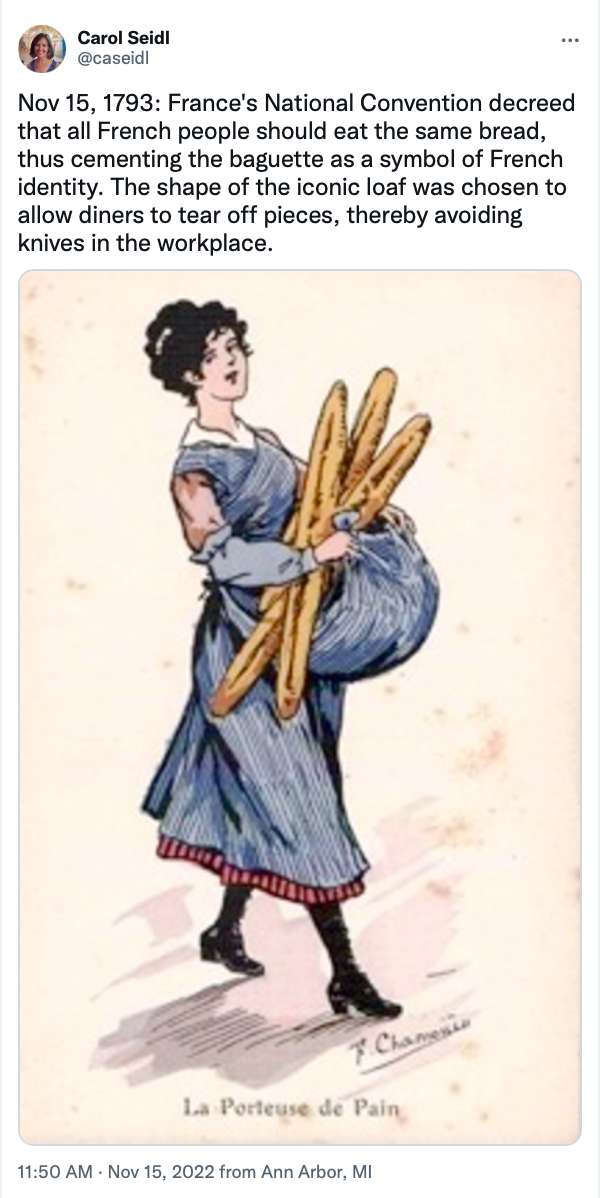 The French have more theories about the invention of the baguette than your Facebook-obsessed uncle has for reasons you shouldn’t get vaxxed. Some say it came about because Napoleon wanted soldiers to have bread that was easier to carry, so they could spend less time eating and more time killing Prussians. Others claim it’s related to the construction of the Paris metro, allowing construction workers to break off pieces of bread easily to share during their break. (Some even posit that it kept knives out of the workplace, resulting in fewer knife fights between employees in the good old days when Jean-Pierre might shank François for taking le quignon.) Those familiar with the history of viennoiserie (the croissant, pain au chocolat, and pain au raisin among them) won’t be shocked to hear that the invention of the baguette is often attributed to a Viennese baker, August Zang. In the 1830s, Zang introduced French bakers to the steam oven, allowing bakers to create products that were crispy on the outside and soft on the inside.

The baguette was only named and legally defined a century ago, when a 1920 law specified a minimum weight (80 g) and a maximum size (40 cm). At the same time, it was declared illegal for bakers to work between the hours of 10pm and 4am, forcing bakers to turn to the spindly baguette, which could be made faster than its rounder cousins. You would think that boulangers would take any excuse not to get up before 4am, but up until that point round boules or country loaves were far more popular, because they had a longer shelf life than baguettes. (A valid reason, as anyone who’s chipped a tooth on a day-old demi baguette will understand.)

The baguette has remained a staple of French food and French culture for longer than we can know for sure. The word or image alone can conjure an entire fantasy of beret’d femme fatales on rain-soaked cobblestones chomping off mouthfuls of bread in between drags of a cigarette. And while it might be gauche to reduce an entire country down to a single object… well, if UNESCO can do it, why can’t we?