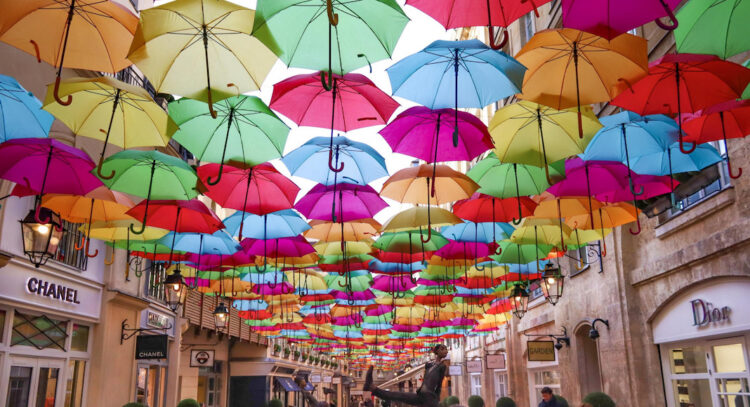 Paris is one of the most architecturally homogenous cities in the world. Most of its buildings, especially in the city center, date to the mid-19th century Haussmannian renovation of the city, so when something more modern pops up, the visual contrast is extreme. It’s for this reason that Parisians are famously averse to new city sights. When the Eiffel Tower was erected at the end of the 19th century, dozens of the city’s most revered artists publicly protested the structure, and French writer Guy de Maupassant allegedly ate lunch inside the tower every day because it was the only place in Paris where he couldn’t see the tower. The Centre Pompidou, Paris’s prized contemporary art museum, was met with similar fury almost a hundred years later for its unorthodox design.

But the years go on, and people can only stay upset for so long. These days, unusual pieces of art can be found all over the city. Sometimes, it still incites the same level of controversy and ire as its predecessors, but most of the time, it’s just another flourish on the canvas of this complicated and artistic capital. 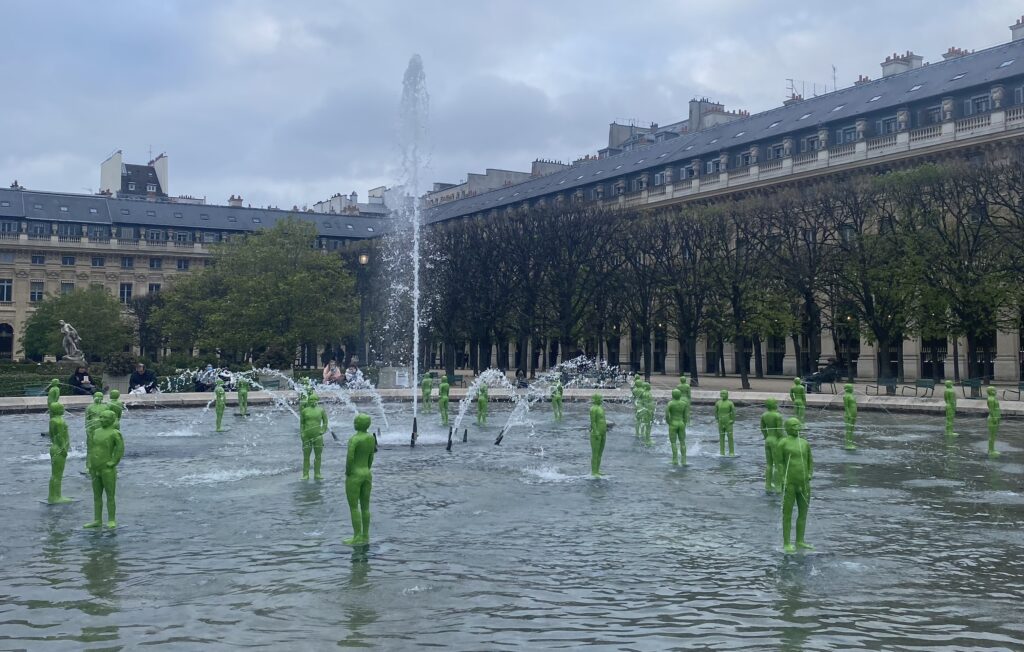 Thirty years ago, French artist Fabrice Hyber created a very unusual fountain in the town of Bessines, in which small green men shoot water out of every orifice of their tiny bodies. These men have traveled to many cities in France, and have finally made it to the Palais Royal in Paris, where they stand in stark contrast to the elegant palace behind them. “The Man of Bessines is a landmark,” explains Hyber. “It signals the ecological commitment and responsibility of each person. He is us in the whole. For me, it is the man of the future, in the information, that flows permanently, and which speaks about our responsibility, our place in the public space.” Well, we’re not sure about that, but it’s definitely an interesting find for those poking around the back streets and courtyards of Paris. 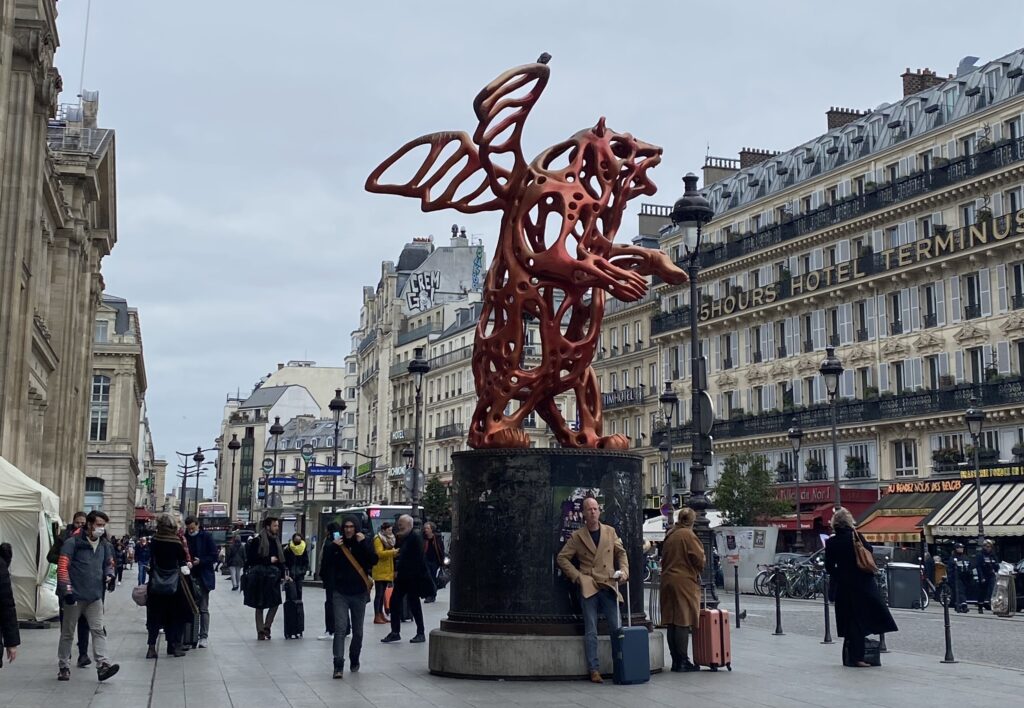 Outside the Gare du Nord, in Paris’s 10th arrondissement, you might be taken aback by a 24 foot tall red chrome statue of a winged bear. Designed by artist Richard Texier, the statue is meant to call attention to the dramatic effects of climate change on even the most fearsome of earth’s creatures. This “Angel Bear” seems poised for escape, howling for freedom outside Europe’s oldest train station.

If you’re not familiar with the work of French sculptress Niki de Saint Phalle, you might be surprised by the large, brightly colored statues at the Fontaine Igor Stravinsky. In the center of the Marais, steps from the Centre Pompidou, these 16 sculptural works represent the compositions of the turn of the century composer Stravinsky with whimsical interpretations of serpents, foxes, mermaids, and even death. 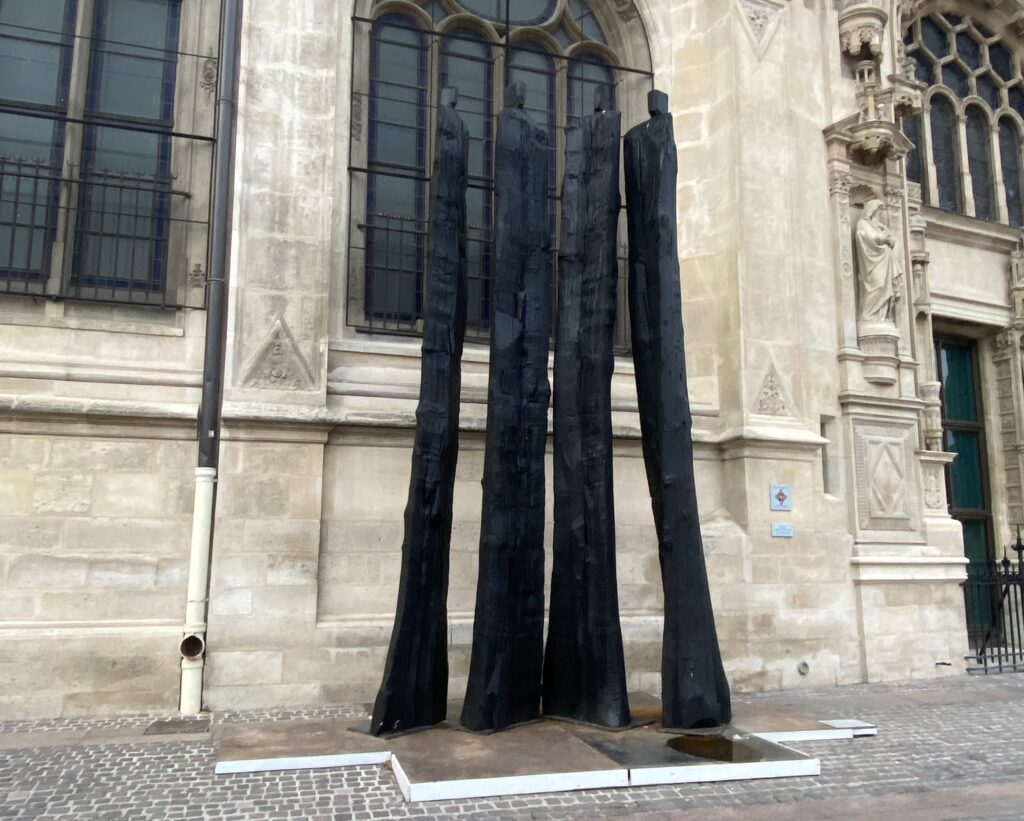 Outside the Église Saint-Eustache stand four tall black figures made from split oak trees, from artist Christian Lapie. They’re giving big dementor energy, but “L’Espace Temps” (“Space Time”), is supposedly a contemplation of the relationship between man and nature. “In front of the forum, these motionless forms resembling men look at the crowd, which, in its turn, looks at them,” reads the plaque outside. “A kind of connivance is established between the tree, split at the heart, and the passer-by, in the center of the city.”

The Bouquet No One Wanted

In 2019, American sculptor Jeff Koons “donated” to the city of Paris a statue of a hand holding a bouquet of tulips, done in the artist’s signature balloon aesthetic. It was created as a memorial to the 2015 Bataclan terrorist attacks, and visually references the Statue of Liberty holding a torch, as a symbol of French-American solidarity. But just as mourners grow to hate the smell of flowers as the bouquets pile up, reminding them of their lost friends, so do Parisians hate Koons’s “gift.” In fact, the artist only donated the concept for the piece, which was paid for by private and corporate donors at an expense of $3.5 million.

The Metro to the Future 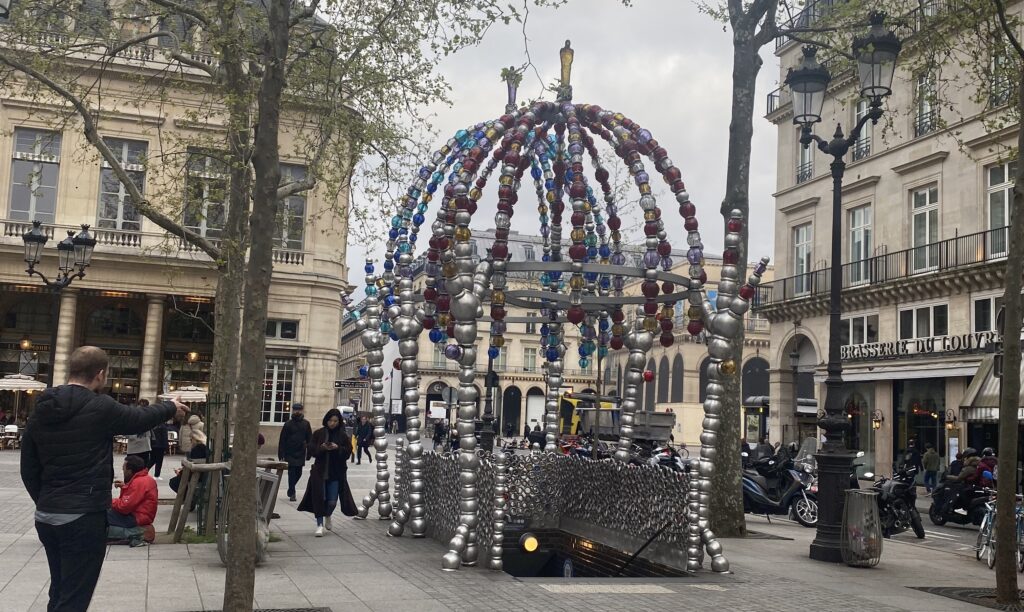 You’ll never get lost looking for the entrance to the métro at the Palais Royal – Musée du Louvre. Designed by artist Jean-Michel Othoniel in 2000, this two-sided entrance, each side representing day and night, looks like a giant chrome balloon animal drawn up by some demented clown. Le Kiosque de Noctambules, or the “Kiosk of Nightowls,” is aptly named for any poor tourist trying to find their way home after a long night and too much vin rouge.

While strolling through the heart of Montmartre, it’s normal to worry about being ambushed by scammers or pickpockets, but don’t freak out if you see a man leaping out of a wall at you. It’s only an homage to Le Passe-Muraille, a novel by French author Marcel Aymé, about a man capable of walking through walls.

Catherine Rickman is a writer and professional francophile who has lived in Paris, New York, and Berlin. She is currently road tripping around France, and you can follow her adventures on Instagram @catrickman. All photos in this piece are hers.