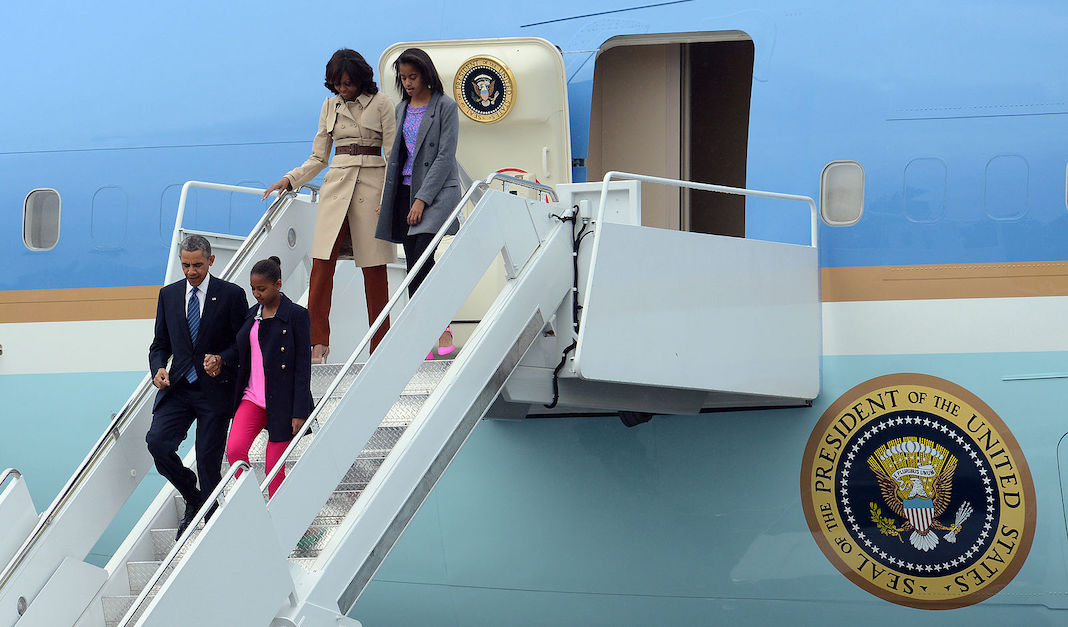 On the morning of Thursday, June 13, French outlets reported that former American President Barack Obama and his family would be traveling to Villeneuve-lez-Avignon in southern France for a week-long vacation. Though the Obamas have no official business scheduled during their trip, that hasn’t stopped the French and British medias from covering the family’s every move.

The news stories began before the Obamas arrived, covering matters such as the mayor of Villeneuve-lez-Avignon’s confirmation of the First Family’s arrival, whether or not the city would be providing security, how their residence was being secured, and how the family would arrive at the airport.

President Obama, his wife Michelle, and their daughters Malia and Sasha landed at the Avignon airport in Vaucluse on Friday night at around 9:30 p.m. local time. A crowd of about 80 awaited, hoping to catch a glimpse of the former First Family. From there, the Obamas went to the nearby town of Villeneuve-lez-Avignon, just across the Rhône from Avignon, where they rented a house for their stay. The house, Le Mas des Poiriers, costs 55,000€ per week, according to MidiLibre.

After a radio-silent Saturday, daughters Sasha and Malia were the first to be covered in the press during their vacation, on Sunday, June 16, while making an early morning trip to the L’Isle-sur-la-Sorgue market, with friends and plainclothes bodyguards in tow. Madame Le Figaro reported the length of the market visit, what they bought and how much it cost, while DailyMail focused more on the girls’s style, and a reporter for Paris Match posted a video of their excursion to Twitter.

That evening, during a private visit to the Palais des Papes in Avignon, a Belgian publication, Le Soir, captured photos of the family while they were leaning out the windows of the palace. Afterwards, the family dined together at La Mirande, where dinner is $106 per person, including wine. The DailyMail‘s article on the dinner introduced the trip as a “no-expense-spared French holiday.”

With so much security around the former First Family, the coverage has tended towards being about the family’s security coverage. An eight-sentence article by MidiLibre about the Obama’s visit to Château de Vaudieu, a prestigious winemaking domaine, on June 17 actually admitted that they had nothing about the vineyard visit to report: “Aucune information n’a filtré au cours de la journée” (No information was available during the day).

When articles haven’t been detailing the security surrounding the Obama family, they’ve veered in the direction of tabloid trash. “Barack Obama braved the heat and enjoyed a hike with his eldest daughter during their family’s luxurious vacation in Luberon, France, on Tuesday — but it looks like his wife and youngest child passed on the workout,” began the DailyMail in a story about Obama and Malia’s hike in Gordes on June 18. The article detailed his outfit, Malia’s outfit, and what kind of photos the former President was taking: “Barack took out his cellphone at one point and appeared to be photographing a plant or something near it, though he may have been capturing the view from a unique angle.”

The possibility that the trip is, for Obama, a pilgrimage to his French roots has also gripped the media. “It is perhaps no coincidence that the Obama family is spending a week-long in Provence,” wrote France Bleu. “The 44th American president is said to have 1% French blood with ancestors in the Vaucluse.” 20 Minutes did more of a deep dive, referencing a 2007 Chicago Sun Times article about how a study of Obama’s family tree by a group of genealogists revealed a link with a Frenchman named Marin Duval, who was exiled to Maryland where he met and married a French woman, Suzanne Brasseur, from Carpentras. “What the mayor of Pernes-les-Fontaines, Pierre Gabert, told us today,” the site began conspiratorially, “is that Suzanne Brasseur comes from Pernes-les-Fontaines in Vaucluse.” That village is “28 kilometers east of Mas de Poirers, where the former president is spending a few days of vacation.”

Despite the press freak-out, the welcome has been warm. Sasha and Malia stopped to take a few pictures with fans while at the Sunday market. Le Parisien and Le Dauphine wrote stories about the French people hoping to meet the Obamas — “Obamania,” Le Dauphine called it. Denis Bouad, President of the Gard département, tweeted in English at the President that he would love to host them in the region’s town of Uzès.

Hi mister president @BarackObama, i’am president of le @Gard, french county you’ll visit tomorrow. I would be thrilled to host you in our beatiful town of Uzès, contact me if you are in !

The American press, meanwhile, has had minimal coverage of the trip. Travel+Leisure reported that the Obamas were having a “seriously luxurious family vacation.” Lauren Alexis, writing in Harper’s Bazaar, doled out compliments for the Obama daughters’s vacation style: “Hang these looks in the Louvre!!!” The Hill wrote a brief article about how positively Obama has been received, sharing a TMZ video with stills of Obama smiling during a dinner with friends. “Obama greeted with crowd of cheers as family vacations in southern France,” reads the article title. (The arrival, incidentally, was filmed by the same journalist who filmed the Obama girls in the market.)

Maria Puente, writing for USA Today, reflected on the wall to coverage of the former First Family. “Yes, life is good for former President Barack Obama, former first lady Michelle Obama and daughters Malia, 21, and Sasha, 18, on vacation this week in the historic town of Avignon in Provence … Well, it’s good except maybe for the media cameras snapping their every move since they arrived by private jet in Provence on Friday.”