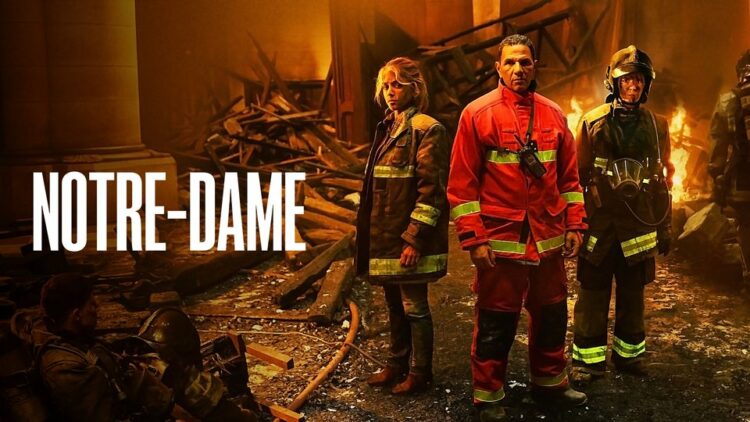 The new Netflix show, Notre-Dame: La Part du Feu, dropped on Netflix last Thursday. Based on the book, Notre-Dame de la Nuit , co-written by Romain Gubert and the Paris Fire Department, the series takes on the night of April 15th, 2019, when the Notre-Dame cathedral burst into flames and the firefighters of Paris valiantly attempted to save as much of it as they could. Though the show is primarily concerned with the firefighters who risked their lives to save the almost-900-year old monument, it also circles out into the dark night to follow several other stories that are connected in an ancillary way to the conflagration. These subplots are about more personal firestorms of the heart and soul than the fire raging in a cathedral considered by many to be the “heart of France.”

The show attempts a braided multi-narrative storyline that connects all the dots by the time the end credits role, an increasingly popular form pioneered, in part, by the American director, Steven Soderbergh, with such movies as Traffic, Contagion and the Oceans trilogy. A side note: Soderbergh is heavily influenced by the French New Wave directors, Jean-Luc Godard, François Truffaut, and their talented cohort, and adopts their style, often using natural lighting, a running gun camera and humanistic, fast-paced storytelling. 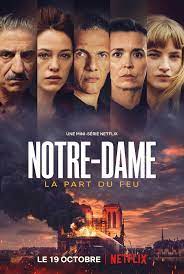 On the small screen, this kind of multi-narrative storytelling has been done more successfully than it is here, with shows like the 1989 British Channel 4 limited series, Traffik (on which Soderbergh based his film), about the illegal drug trade. Traffik, like this show, follows a kaleidoscope of stories and lives affected by a number of forces, beginning with the lowly poppyseed that will be transformed into opium and and then become a looming, larger-than-life monster, affecting innocent and also not-so-innocent lives. The reason I bring up Traffik and the film it inspired is because those projects might have been a blueprint for this series about Notre-Dame. Also, like Traffik, this French show features a father desperately trying to save his drug-addicted daughter. This French father’s journey to find his daughter takes place over that one fateful night, when the stakes are incredibly high for him, her, and the city of Paris. Like both of those previous efforts, Notre-Dame also tries to examine the various circumstances of a wide range of people. Though it primarily focuses on immigrants, plumbing the important questions of what it means to finally belong in an adopted country. Can immigrants ever really feel like they belong? Or do they need to race into the burning heart of France to to swim in its veins?

Perhaps that question is best answered by one of the firefighters whose boss, the Fire Chief, is wavering about endangering human lives in order to save a monument made of stone and wood. At a crucial moment, she says to him, “I believe the cathedral is universal. Whether you are a believer or not, it belongs to all of us. It is a part of our history.” This explains the subtitle, “La Part du Feu,” which literally means “the share of the fire,” but is also a French expression that means relinquishing one thing in order to protect something else. This theme permeates every life portrayed in the show, and elucidates the losses and bargains people have made in attempts to save some part of themselves, their lives, or their beliefs. In the end, even the weakest storyline—about a Syrian refugee whose wife fell off the boat and drowned while he was sleeping—tries to come to terms with this notion.

Notre-Dame is filled with music that billows thick and smoke-like through the entire 6 episodes and scenes that stretch the outer boundary of patience as they milk every long second of emotion while characters are torn apart and reunited during this one crazy night. In this way, it’s like many of the attempts that have been made to capture disastrous events that changed history—think of the multiple movies and shows about 9/11, for instance, that fall short of true artistry. Although I’ve heard that there are exceptions –Paul Greengrass’ United 93 and the collection of 11 shorts entitled September 11. I say “I’ve heard” because I never saw either; I lived in New York City during 9/11 and the trauma of that day is not something I can go back to, perhaps ever. My belief is that its almost impossible to capture the full impact of such huge events. And it’s possible there are many French people who feel the same way about watching what happened to Notre-Dame dramatized in a movie, or show. They, too, might feel there’s no way to revisit that terrible night.

But even with the inherent weakness of the task, for those who are up for it, this Notre-Dame offers some terrific performances, most notably by the brilliant, flawless, French-Armenian actor, Simon Abkarian, who plays the immigrant father, Max, whose daughter is a drug addict and high-end escort. Two other notable performances are the firefighter, Alice Adamski, played movingly by Megan Northam, and Alice Isaaz who gives a subtle breakout performance as the reporter, Éléna.

If a successful piece of art kindles the embers of desire to learn more, then Notre-Dame: La Part de Feu is a success. I spent an entire rainy Monday watching the series while sick in bed with a cold. When it was over, I spent another hour watching a fascinating documentary from Nova, called Saving Notre-Dame, about the the incredible effort currently underway to rebuild the cathedral using both old and new technologies, which will not only restore the monument to its former glory but also usher it into the 21st century. By the end of that documentary, in which I learned that, “The distance from Paris to all other French destinations is measured from Notre-Dame,” I realized with startling clarity how very important this story of fire, courage and restoration is to the French psyche. And that left me newly appreciative of the efforts made by the filmmakers to bring their decidedly French story to the rest of the world via Netflix.

Caitlin Shetterly is the Editor-in-Chief of Frenchly. She is also the author of 4 books: Fault Lines, Made for You and Me, Modified and the upcoming novel, Pete and Alice in Maine, which will be published in 2023 by Harper. She is a native daughter and she lives with her two sons and husband in an old house on the coast of Maine.
Share on facebook
Share on twitter
Share on linkedin
Share on email
Share on pinterest