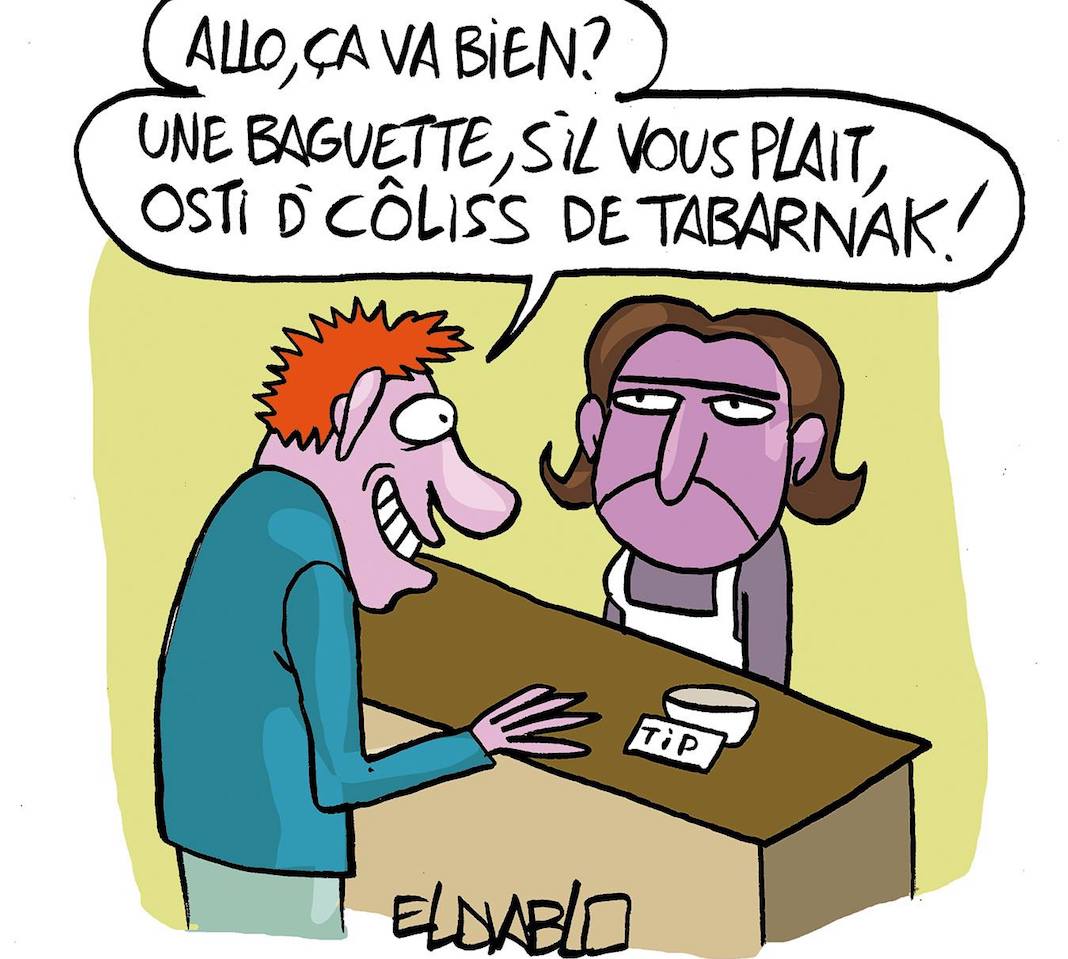 So you already know that French in Québec is different than French in France. Sound like a native Quebecker and impress your Québecois friends by slipping in a few of these phrases.

A surprise when you hear it for the first time, this little word packs a big punch. It’s similar to “Lets go!” or “C’mon!” The Quebec rap group Dead Obies even made a chorus out of it. More concretely, you can use it to tell your mother to hurry up (“Aweille, call a cab!”) or to tell your dog to get off the couch pronto. (“Aweille Médor!”).

The first time you hear it, you think the person you’re listening to simply forgot to say the end of the word (hey, it happens). When you hear it again, in a meeting this time, you look at colleagues with suspicion: “Are they also part of this strange team that has decided to cut the fru/stration in two?” If they are Quebeckers, most certainly. As for the origin of the expression, even McGill literature professor Chantal Bouchard can’t rely on her Latin: “The expression is recent, and I also came to conclusion that it was the abbreviation of ‘frustrated,’ but I don’t know any more.” It’s fru/strant.

In France, numbers are listed in blocks of two (e.g., 06 42 56 88 88, or something). In Quebec, it’s different! For example, “514” reads “five one four” instead of “51.4…” . According to Chantal Bouchard, “formerly in Montreal, fifty years ago, numbers started with three letters followed by five digits, that made FED 45547, and read Federal, four, five, five, four, seven. It was probably easier to remember than forty-five thousand five hundred and forty-seven. When this system was abolished, the habit remained. I think it’s mnemonic methods that dictate these habits.”

Here again is an expression that is similar but slightly different from a French expression.  “Se mettre sur son 36” (or “31” in France), is the same as dressing to the nines — looking good! We don’t really know why Quebeckers have a separate expression from the French, even though it means the same thing. Put on your 31 or 36, it doesn’t matter, as long as you understand each other enough to meet up at the same time.

At first, this may sound like an “Ouch, ouch, ouch” implying that we hurt ourselves very badly against the corner of a table (poor toe). “Ayoye” can indeed mean pain, as Benoît Mélançon, professor of French literature at the Université de Montréal, explains on his blog L’Oreille tendue. He also states that the interjection can be a source of astonishment and, in some cases, even admiration, or sometimes both. Ayoye!

As the Je parle québécois site already explains very well, this is a distortion of the famous Quebec swear word “tabarnak.” “Tabarouette” is considered a PG version of “tabarnak,” a bit like when the French say “mercredi” instead of, “merde.” Recently, a French woman from Montréal had the good idea to take up the expression and marry it to the French’s all-encompassing swear word “putain” on a tote bag. Result: “putain de tabarouette.” Now that’s got a good ring to it.

If you haven’t already done so, you will quickly notice that in Quebec, the polite “stp” (for s’il te plait) is replaced with “SVP” that is often written in capitals (like s’il vous plait). In other words, even if your boss is familiar with you, he/she will probably write to you: “Can you send me your Powerpoint quickly, svp?” Don’t ask us why svp.

It so confusing to Continental French learners, but sometimes, in Quebec, some plurals aren’t pretty. If your ears ever hear the word “chevals” (instead of “chevaux”) and other “mals de ventre,” forget what you know about French from France and accept the pluralizing “s” at the end as true. Use Canadian kindness typical of the province.

As of recently, the word “trampoline” can use a feminine or masculine article. Since May 2018, the word can freely change gender, according to l’Office québécois de la langue française (OQLF). As for the words that change gender once they cross the Atlantic (like “job”), that’s beyond us…

In France, “sketch” (according to Larousse) is a short dialogue work, generally comical, performed in the theatre, music hall, television, or cinema, like a sketch comedy show. In Quebec, this literally means that “it sucks” or that something is sketchy, like creepy. In concrete terms, a restaurant whose facade looks bad and inside you can hear the staff screaming at each other each other is “sketch.”

Happy hour! Pronounced like “cinq à sept,” this is the shorthand way of saying happy hour in Quebec, based on the time to meet with friends for an afterwork drink (e.g., “It’s been a long day at work! Want to meet for a [email protected]?”). This is super different from in France, where a “cinq à sept” is a sexual meet-up, like “Jean-Michel couldn’t go to his daughter’s soccer game; he was having a little “cinq à sept in a hotel in Pigalle that afternoon.”

This article was first published on our sister site, Maudits Français.