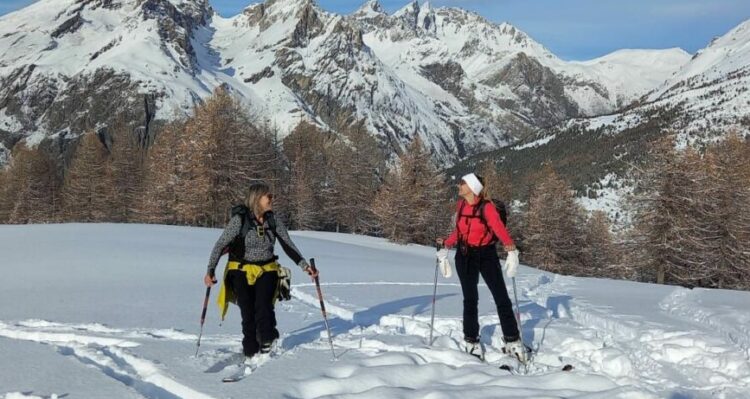 She Continued Skiing in France Despite Pandemic Restrictions

For skiers the pandemic has sometimes been both a curse and a blessing. In particular, skiers in France saw a full shut-down of the ski season last year with all resorts and ski lifts closed for good. For many, it meant a missed season of this popular Alpine activity. But not for competitive skier Cathy Proal, 53, and her daughter, Julie Arzano. The French skier, who resides in Aix-en-Provence, decided to turn to her favorite pastime of back-country mountain skiing, or ski de randonnée, in the Southern Alps near her parents’ town of Barcelonnette. She brought along her daughter, Julie, making their outings mother/daughter bonding trips. 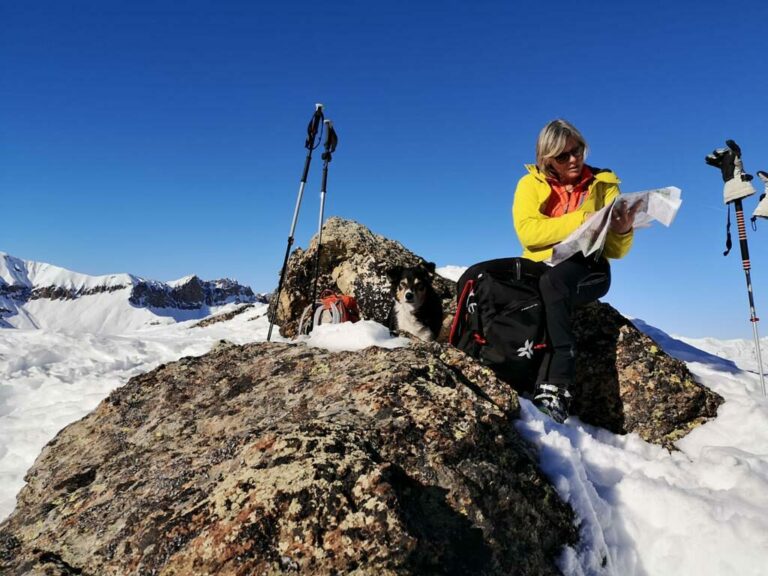 “Ski de randonnée brings us a unique serenity. It is a real physical effort rewarded with the beauty of the landscapes, impromptu animal encounters, total silence, changing lights,” she explains. “The quality of the snow can make two outings in the same place completely different, it is as if the mountain is changing its coat!”

Humankind has been skiing for over 4,000 years now. The first signs of this activity have been found on rocks in caves in Norway. Skiing was a mode of transport though the Alps in the 19th century and later it became a leisure pastime for the English bourgeoise during the 20th century. For a long time, this was the only manner for one to see the icy massifs in the mountains. It wasn’t until  the 1930’s when  the first ski lifts appeared. In 1960, the sport gained new popularity as skiers began to seek more difficulty than pleasure and cross-country/back-country skiing began to grow. 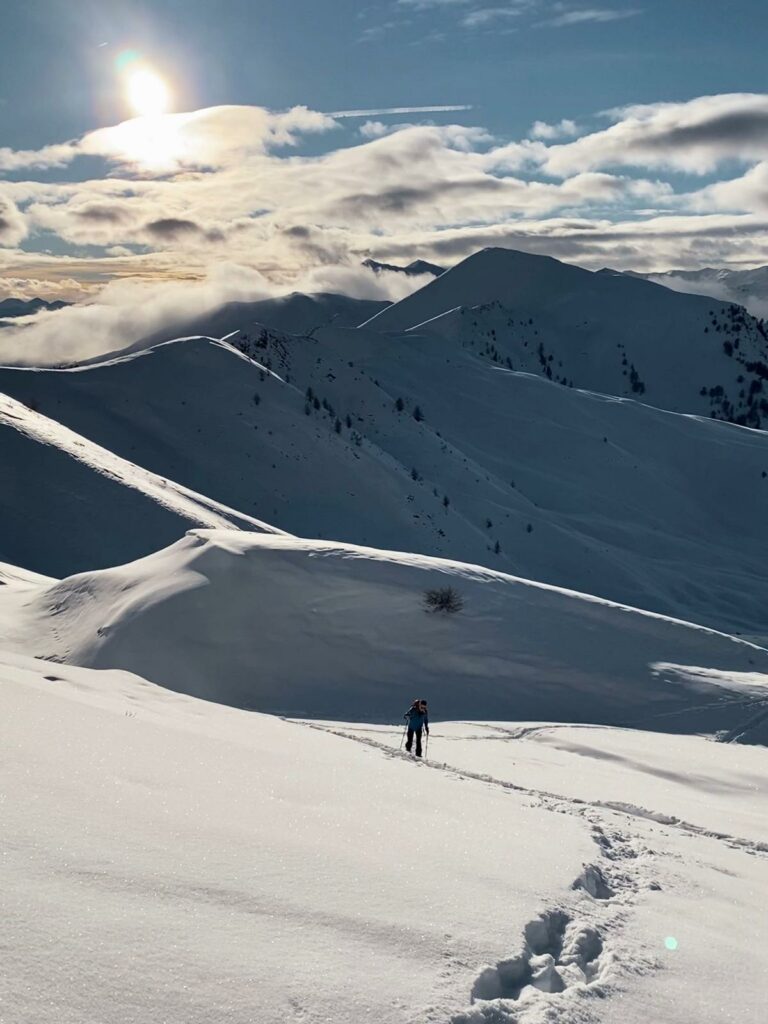 Proal is normally an active athlete, sailing in the summer near Marseille and skiing in the winter. So she took easily to the grueling sport of climbing up mountains, quite literally, on skis and skiing downhill without the help of a ski lift. This is done with specific equipment: lightweight skis, detachable heel bindings for walking and ankle flexibility, as well as seal skins to stick under the ski (the seal skins are synthetic nowadays). For the descent, the seal skins must be removed, the shoe locked in place, and regular Alpine-ish skiing proceeds down the piste. This is a bit different from classic cross-country skiing which usually is all about traversing flat terrain.

“Last year, during the pandemic, I think we had our best times!” recalls Proal. “We used to ski de rando for many years, and so the closure of ski resorts did not bother us in any way. On the contrary, the mountain had regained complete silence! No more noise from the ski lifts, no more noise from the crowd, nature had resumed its rights.” Proal’s images (as she is also an amateur photographer) capture the allure of the French Alps in their full glory.

For Proal, cross-country is also a sort of gentle melody, a certain meditation that offers natural healing. “Ski de rando is a kind of return to the source, it is my oxygen, my way of restoring myself after a week of work in the city,” she describes. “It is a communion with nature and silence, it’s the art of listening to the silence and marveling at snow crystals!” Her daughter, Julie, says that it is the quiet that she most remembers from these trips — the pure silence whispering with glittering flakes of snow. 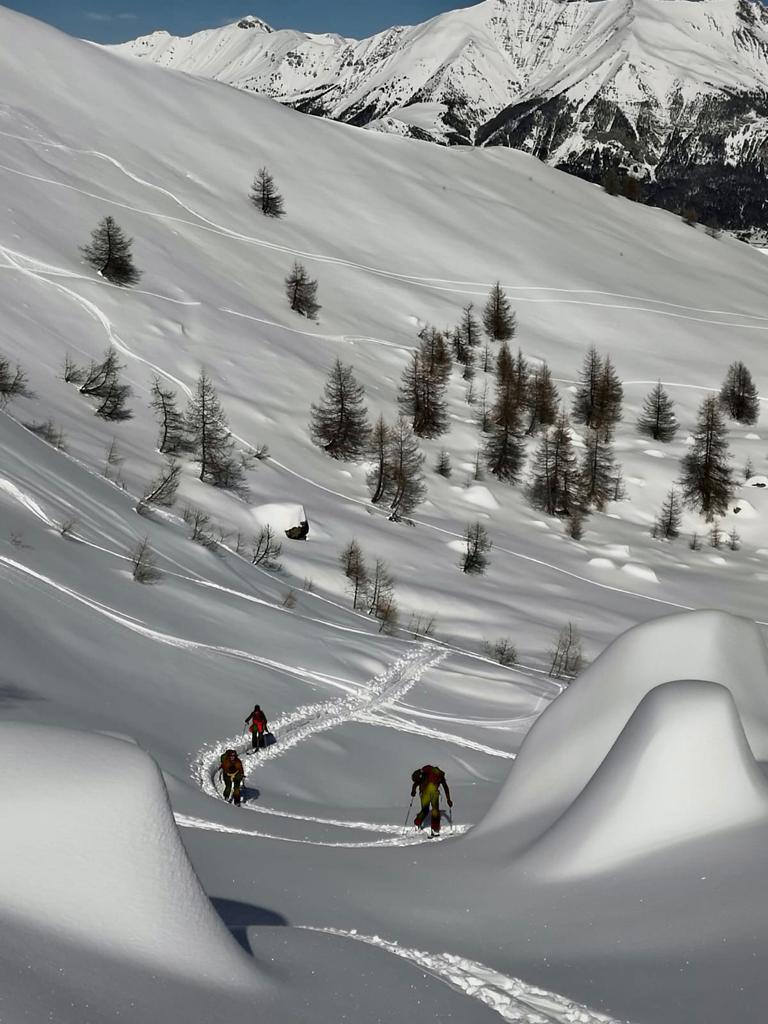 However, Nordic skiing has some rules that must be respected in order to make it safer. A shovel, probe, and avalanche transceiver (avalanche victim detector) are a three-part system always necessary in the event of a natural disaster. The avalanche transceiver is to be worn underneath the clothing and emits low-power pulsed radio signals. In case of an avalanche, some member of the party might switch their transceiver into receive mode to find the coordinates of lost skiers, perhaps buried under the snow. These tools are essential in being able to get through deep snow, help others, and be located in case of emergency. Responsible skiers will not scale mountains without proper training and have learned to listen to the mountains. This also includes weather forecasts, common sense, and plenty of intuition.

“If I had any advice to give: Try it!” says Proal. “You will quickly want to turn your back on ski resorts.”