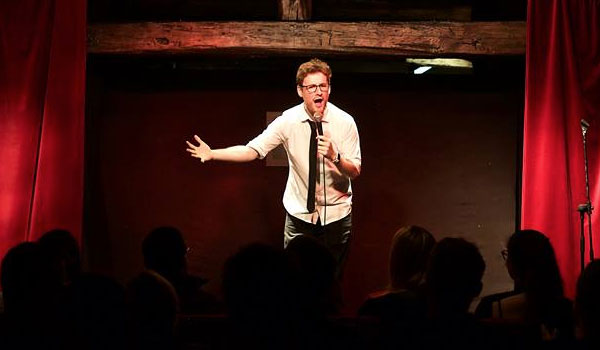 Learning other languages is a funny thing—but sometimes comedy doesn’t come through as well in your second tongue, and you just want a good laugh in your native language. Luckily the eternal attraction of anglophones to France has carried with it more than a fair few English-speaking comedians. Here’s where you’ll find them in Paris:

Karel Beer has been hosting stand-up nights in Paris since 1995, when Comedy Central was still a wee lad of 4. Anyone even glancingly familiar with BBC comedy will recognize some of the names from their twenty-year history: Dara O’Briain, Dylan Moran, Greg Proops, Rich Hall, Bill Bailey, Johnny Vegas, and others:

Shows are mostly held at La Java in the 10th. Their schedule can be found on the last remaining website built in 1997.

SoGymnase in the 10th has become sort of the epicenter of English comedy in Paris, with Sebastian Marx’s long-running New York Comedy Night calling the club home. The venue continues to roll out new shows featuring emerging and established talent, as well as solo stand-up, on the top floor of the Théâtre du Gymnase Marie Bell (with access to an Instagram-ready view of the REX).

Down the street (although the street changes names when it crosses into the 9th) is the Théâtre des Nouveautés where Olivier Giraud will continue to perform his “one man/one woman” show How To Become A Parisian In An Hour until 2017 at the earliest.

Not to be outdone, Sebastian Marx also has his weekly one-man show at La Nouvelle Seine, a restaurant and theater on the actual river. Marx has been performing A New Yorker In Paris in both English and French and has one distinct leg up on Giraud, as his show suggests: he’s an American.

Théâtre La Cible near Pigalle does most of its comedy business in French, but every week, there’s usually at least one act in English. Check their website for more details.