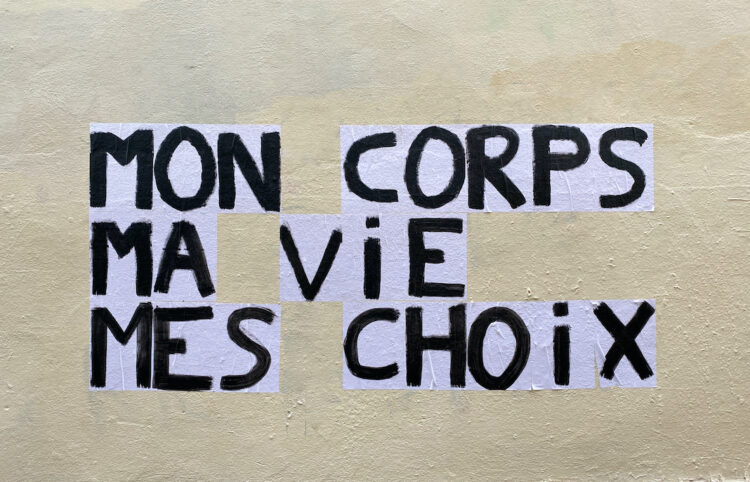 On Monday night, the leak of the U.S. Supreme Court’s plans to overturn Roe v. Wade, the fifty-year-old law guaranteeing American women access safe and legal abortions was met with shock and condemnation in France. Le Monde decried the decision as a threat to women’s rights and a grave blow to America’s international image.

Libération’s New York correspondent attended a spontaneous protest at Manhattan’s Foley Square, reporting on the rage and tears of thousands of men and women, and the vows to fight back from speakers,  including the state Attorney General Letitia James.

Many commentators across France expressed horror at the wider consequences of demolishing federal protection for abortion, which would trigger near-total bans in at least thirteen states, and threaten a raft of hard-fought and dearly held civil rights. The Swiss newspaper Le Courrier put it bluntly: The announcement was like a bomb going off in Washington.

For Europeans, the threat to Roe is yet another reminder of the instability of women’s rights closer to home. After the historic defeat of Ireland’s abortion ban in 2018, by a 66.4% majority in a national referendum, the pendulum swung back with Poland’s right-wing government outlawing abortion in almost all cases in January 2021, after decades of much more lenient and compassionate rules. In France, abortion rights have been a matter of fierce debate in recent months. In February, the period during which a pregnant person could seek a no-questions-asked termination (medically known in France as “interruption volontaire de grossesse,” or IVG) was extended from 12 to 14 weeks, after which there must be proof of serious sickness in the fetus or harm to the mother if the pregnancy is carried to term. The change brings the country into line with its neighbors and, it was hoped, would end the practice of around 3,000 French women per year being forced to travel for terminations—an option only open to those with sufficient resources. President Macron initially opposed the change, although he has also called for the EU Charter of Fundamental Rights to be revised to recognize the right to abortion. During his reelection campaign, he called abortion a “tragedy for women.”

France legalized abortion two years after Roe v. Wade, in 1975. It was the crowning achievement of Holocaust survivor turned political leader Simone Veil, a revered figure who is one of just a handful of women honored with burial in the country’s national Panthéon. Macron’s language of tragedy in fact echoes a famous statement of Veil’s, from her opening address to the National Assembly in 1974, which was made up almost entirely of men: “No woman resorts to an abortion with a light heart. One only has to listen to them: it is always a tragedy.” This delicate framing was vital back then for negotiating the controversial issue, although it did not stop members of the assembly from yelling abuse at Veil and calling her a murderer. Undaunted, she went on to explain—as many across social media have done over the past two days—that banning abortion does nothing to actually curtail the practice. It simply drives it underground, in conditions of far more danger and greater potential tragedy, as French historian Mathilde Larrère pointed out on Twitter:

The Roe v. Wade leak coincides with the imminent US release of Audrey Diwan’s award-winning film Happening, which follows a young French woman’s attempt to end an unwanted pregnancy in 1963. Yesterday morning, the director shared Le Monde‘s story on the imminent ruling, calling it painful to wake up to:

The film, based on the real-life experience, almost sixty years ago, of the renowned 81-year-old author, Annie Ernaux, has hit a nerve with younger French women who have grown up with the right to abortion but have felt a lingering culture of shame and secrecy around it. Inspired by the film, a December 2021 cover story in the feminist magazine Causette, “Oui, j’ai avorté,” shared the stories of thirteen prominent women who had chosen to end a pregnancy. It joins other efforts—like the online movement Shout Your Abortion, which insists that “our stories are ours to tell”—in attempting to destigmatize this extremely common medical procedure (it’s estimated that one in four pregnancies ends in abortion every year.)

After half a century in which both medical technology and social norms have changed profoundly, women are losing patience with the reticence of politicians like Macron and the members of the Democratic establishment in America and the west to treat abortion as a healthcare right, not a moral scandal. The new film, Happening, offers a chilling dramatization of what the stakes truly are. If art can change lives, this is that film’s moment.