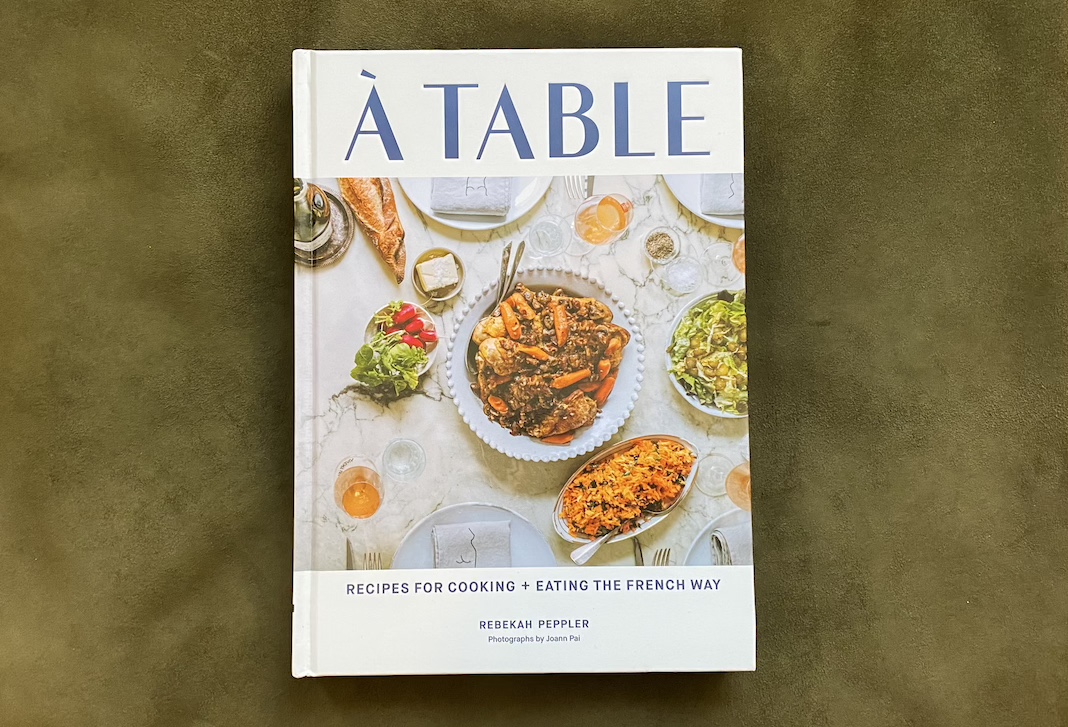 It takes a certain kind of sensibility to open your cookbook with one of Simone de Beauvoir’s most famous quotes, and if Rebekah Peppler’s A Table: Recipes for Cooking and Eating the French Way proves anything, it’s just how marvelous this sensibility is.

The James Beard Award-winning food writer, who literally wrote the book on the French apéro, Apéritif: Cocktail Hour the French Way: A Recipe Book, is back with a new book on French cuisine that every French food lover should run out and get right this second. With gorgeous photographs by Joann Pai, reading À Table will hypnotize you so thoroughly that by the time you start making your grocery list, you’ll forget that you can’t run and pick up radishes at the corner marché.

There are three meal sections: Before, During, and After, filled with ideas for cocktails, snacks, sides, desserts, and what have you. Peppler’s writing is casual, to the extent that she reads more like a friend giving you some offhand tips rather than a food writer who’s gone to the trouble of writing and publishing an entire book. In the pantry section, when describing her favorite French butters to use, she mentions a number of brand names, but says that her go-to is a supermarket brand she can’t recall the name of: “(DM me and I’ll find out the name)” is the included parenthetical. 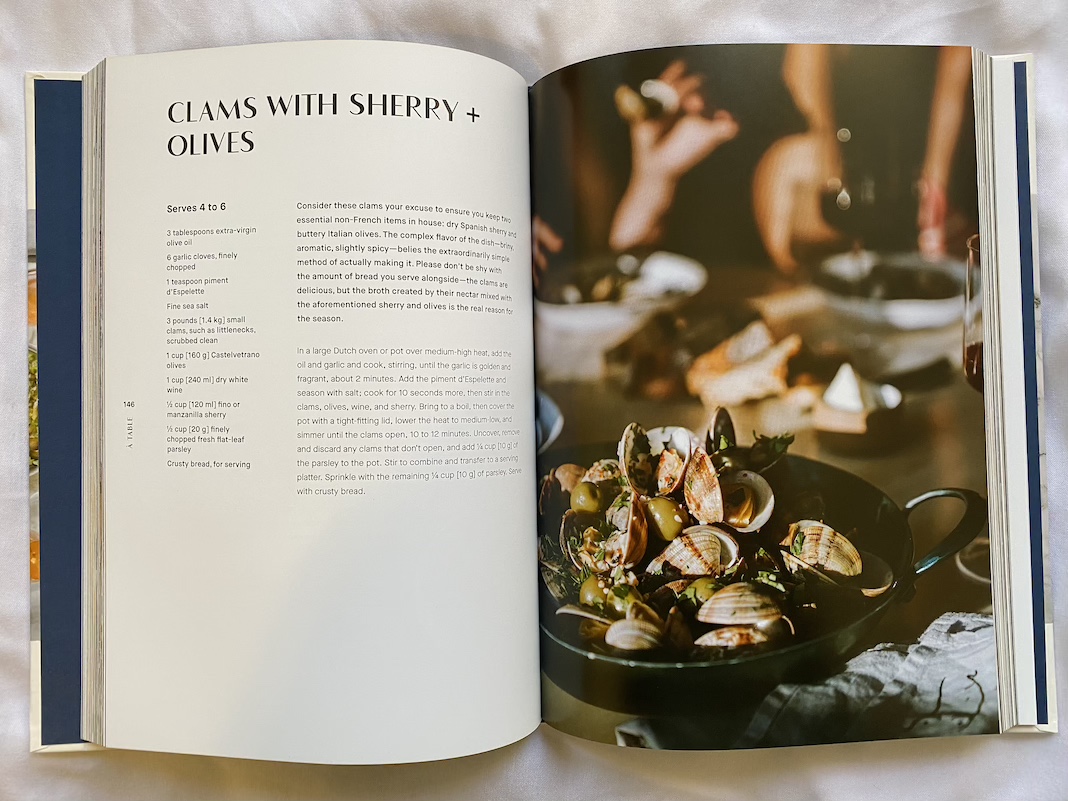 The book is about as inclusive as anyone could reasonably accommodate, with an anti-snob ethos undiluted by the intense breadth of knowledge it imparts. “…If your guests complain about cloudy ice, get less douchey friends,” Peppler emphasizes in an entire separate page about the types of ice to keep on hand. There’s a lovely section on non-alcoholic beverages in the apéro section, with a reminder that if someone says they’re not drinking, the reason is “none of your business.”

Some books about food come off as straight up lusty, and À Table is a pretty sexy volume as they come. But it’s also downright funny, with little details like the fact that Peppler’s three favorite wine stores include the great one, the one by her house, and the one by her therapist.

It feels like something of a sister cookbook to Melissa Clark’s Dinner in French. Though the ingredients are appropriately French, as Peppler is Paris-based, there’s a heavy cultural combination element. Spanish olives with French comté, potato chips in a crème fraîche dip, and green shakshuka are all lovingly illustrated with substitutions aplenty. The recipes are also designed with both French and American grocery stores in mind, and Peppler is thoughtful enough to explain distinctions you might not have thought to make, like the fact that American “all purpose flour” doesn’t have a direct French equivalent. 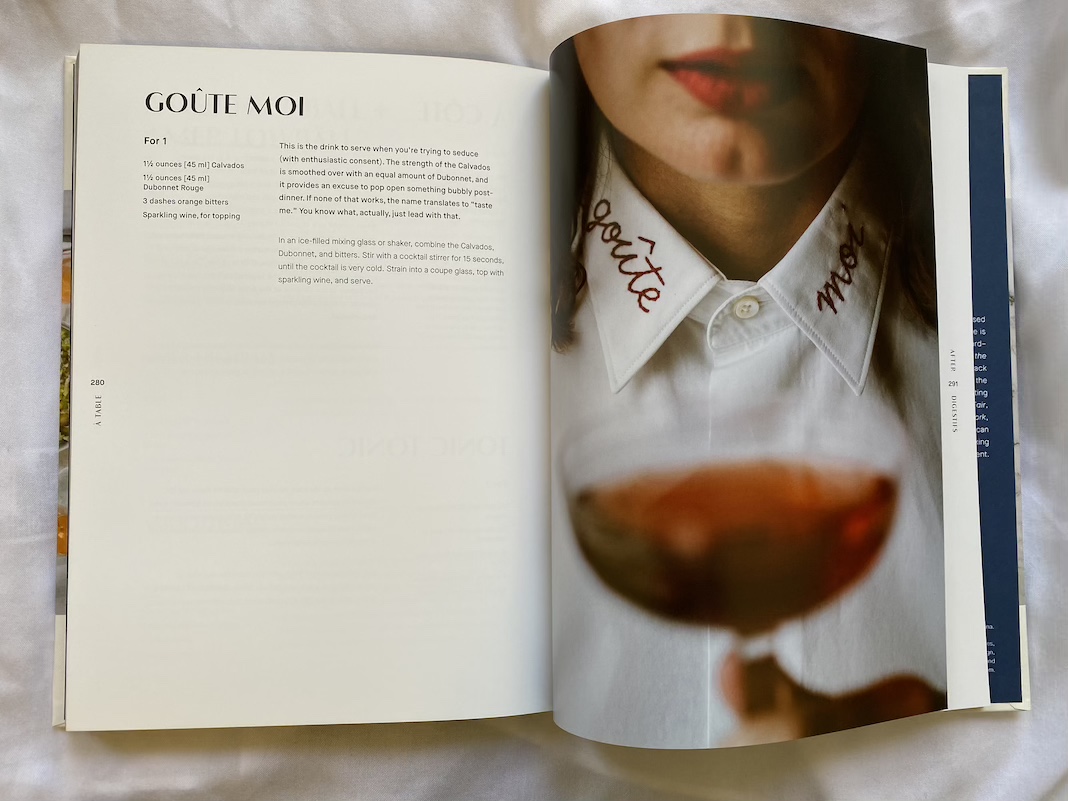 In addition to the recipes, there are general notes on how to make your guests feel comfortable through the right combination of organization and hospitality (or, as she calls it, being a “dom in the kitchen, sub in the dining room”). A little less Emily Post, a little more Emily Post-It. These remarques range from the merits of the apéritif dînatoire (the ultimate iteration of “snacks for dinner”), to what really might be the definitive guide to “meat on a board,” i.e., charcuterie.

Whether you’re ready to attempt “Easier Bouillabaisse,” or just want the inspiration to create your own “house cocktail,” this recipe book has something for everyone. Because it’s really a book about the joys of squishing as many good friends, good drinks, and good food onto one tiny kitchen table as possible, no matter where that table might be.