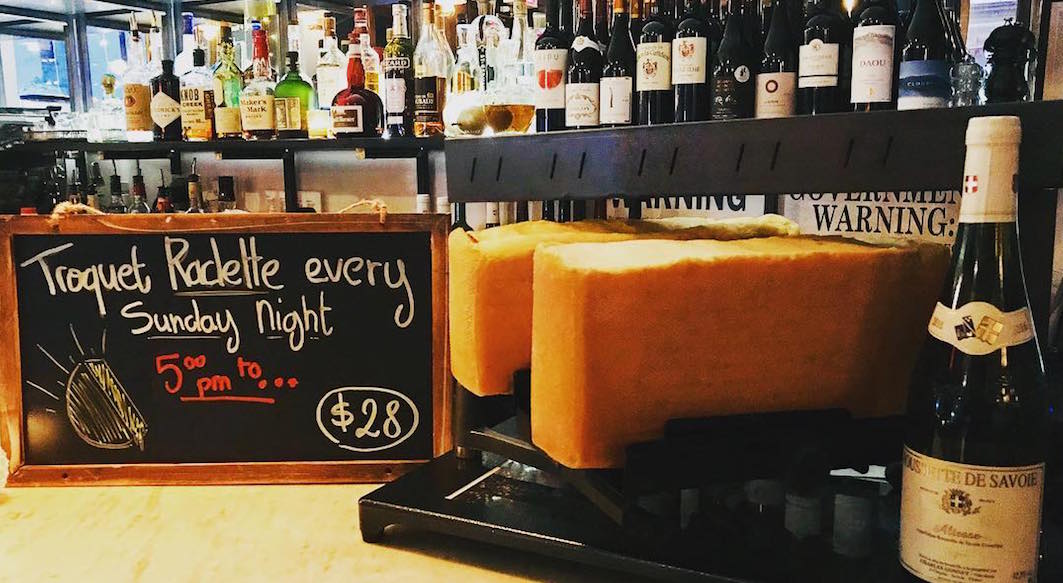 Raclette is Having a Moment and Everyone Should Get On Board

When you push through the doors of Raclette in the East Village, you are welcomed with open arms by the mouthwatering smell of melted cheese. The temperature rises a notch, lifted by the raclette machines heated to a burning white at the back of the room in a small kitchen.

Raclette is both a kind of cheese and a speciality dish. An Alpine tradition, raclette cheese is melted on a set of small skillets over open flame, and poured over potatoes, cornichons, charcuterie, and vegetables. Alternatively, a giant wheel of hot raclette cheese will be scraped directly onto a plate of food. If you haven’t tried it yet, you’re tragically missing out and behind the ever growing trend.

To be convinced of the growth of raclette in the United States, it is enough to look at the transformation of the restaurant. When Edgar Villongco launched the business in 2015, it was in a 14-seat space in Alphabet City. Three years later, convinced by critics and lovers of cheeses, he invested in a larger room seating 40.

“In the old space, we had an online booking system and other measures in place to maximize the number of people we could accommodate, but that wasn’t enough,” Villongco explains. During a visit on an afternoon in December, the new restaurant was almost full. And it wasn’t even cold out. “In the summer, we have another type of customer—tourists from Latin America, who are curious to try raclette,” says the restaurateur.

In recent years, raclette has flourished in the northeastern United States and other less expected parts of the country. Raclette has an established presence in Illinois, Pennsylvania, Colorado, California, and Oregon. In New York, you can find it on many other menus (Baita, Le Troquet, Café Select…), but Raclette is the only restaurant entirely dedicated to the speciality in the city. The raclette trend even inspired two young entrepreneurs to launch a home delivery service for cheese appliances.

Until now, Americans, always very fond of processed cheese (and cheese in many other forms) were more attracted by fondue. The latter became widespread in the 1960s, against a backdrop of sexual revolution. “Fondue is a social meal. Cooking together over an open flame inspires conversation, if not also warmth and intimacy. (This interpretation of fondue has held through the years; in Marvel’s 2011 film, even Captain America uses fondue as a euphemism for sex)” says Eater.

Saying the raclette inspires sex would be a bit of an exaggeration. “A lot of Americans think it smells bad. When Trader Joe’s was doing raclette demonstrations, a lot of customers complained about the smell,” says Diane Sauvage, head of French cheese exporters at Interval Export in the United States, explaining the dish’s lack of popularity until now. Another challenge: having the right device to melt the cheese.

For this professional, the renewed interest observed “over the last three to four years” corresponds to the arrival of raclette cheese on the shelves of Trader Joe’s—”it’s a trendsetter”—and to the “in-depth work carried out by several exporters.” “It’s a cheese with a good value for its cost. It’s good even without being heated and works well with the American preference for grilled cheese,” she says. According to Sauvage, her raclette cheese sales have increased by “30-40%” in the last three years.

In her restaurant in Buffalo, New York, Raclettes, Sandra Wilkins claims that 40% of her sales come from raclette. “When we opened two years ago, we wanted to make a raclette restaurant. We had to explain what it was, how it worked… We put the device on the table. Maybe it was intimidating to the clients. It didn’t catch on, so we decided to make a bistro menu,” she recalls. “But today, the interest has grown. It has to do with globalization. Americans travel more.”

Just how far can the raclette appeal go? It’s a seasonal dish, welcomed primarily in cold regions. But in a country as vast as the United States, the market has great potential. The conquest has only just begun.