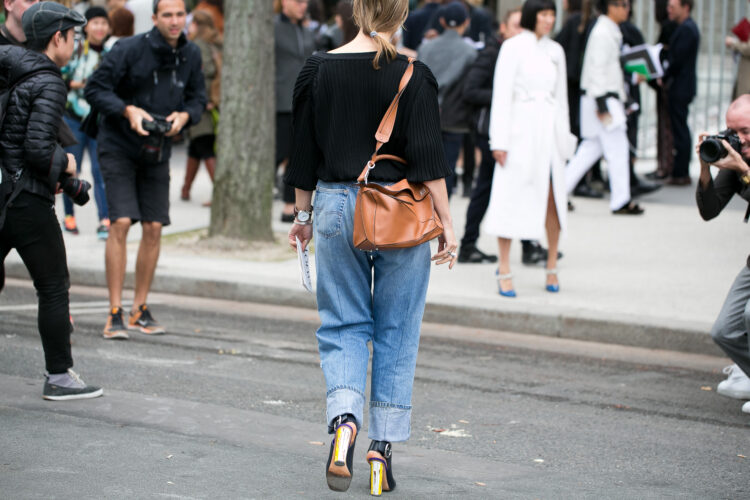 COVID is slowly winding down and that means that Paris Fashion Week is back in full swing to show its Fall-Winter 2022 collections. Anna Wintour, the Editor-in-Chief of Vogue USA, still prefers to wear her mask, but most events are booster-enforced and safe to go.

February is a fashion month that starts in New York City, and then travels to London and Milan before its final destination of March in Paris. But what this Paris Fashion Week (PFW) couldn’t have expected or ignored is the war in Ukraine. While the war broke out while Milan Fashion Week was already in process, leaving the Italian designers with no time to react, designers in Paris had a few days to think about what they wanted to say and the message had been loud and clear!

French designers chose to make bold statements with each of their Fall-Winter 2022 runways shows and so did their guests. Some heritage fashion houses like Balenciaga and Givenchy paid homage to current events with the blue and yellow colors of the Ukrainian flag, while other designers and celebrities, like Salma Hayek, wore the colors as part of their look. We’ve compiled five of PFW’s best moments and takeaways.

Balenciaga Stands Up for Ukraine

Balenciaga created a snowy squall on their runway in support of Ukraine. Demna Gvasalia, the brand’s Creative Director, is from Georgia, a prior victim of Russian aggression. He left a heartfelt note about his own experience as a “forever refugee” and his sentiments for Ukraine in the pre-show notes. The note and an oversized T-shirt with Ukrainian colors was left on each seat for guests to take home with them. “This show needs no explanation, it is a dedication to fearlessness, to resistance, and to the victory of love and peace,” he wrote. Prior to the show, Balenciaga also wiped its Instagram feed, save the sole image of the Ukrainian flag. 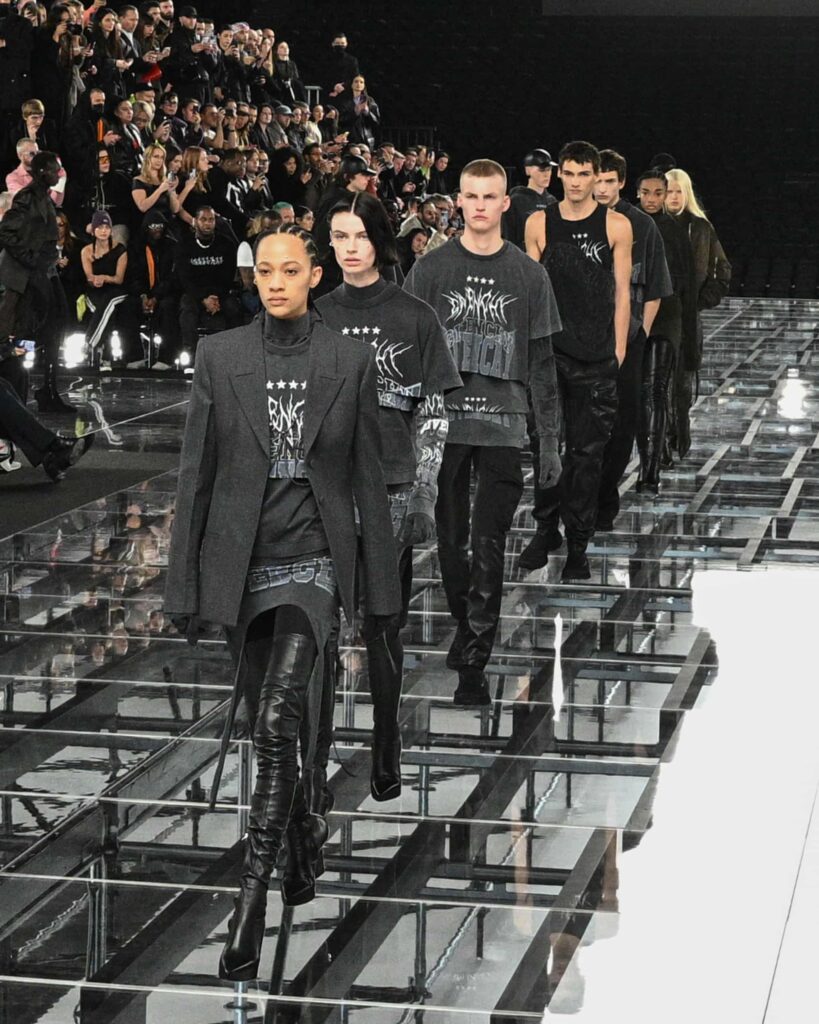 Fashion has the ability to reinvent itself every season and try on a new look. The French house, Givenchy, did just that and went from French elegance to full punk this week. The featured fashion was largely composed largely of sportswear pieces in a dark, Death Metal spin. All the pieces were, naturally, black. A curious element however, was a touch of Audrey Hepburn pearls on some of the looks offering them a soft element of timeless fashion. Givenchy, too, made a statement in favor of Ukraine, as it lit up the Arena Paris La Défense in the colors of the Ukrainian flag. The brand also committed to a donation to the Ukrainian Red Cross and shared a QR code to encourage guests to do the same. 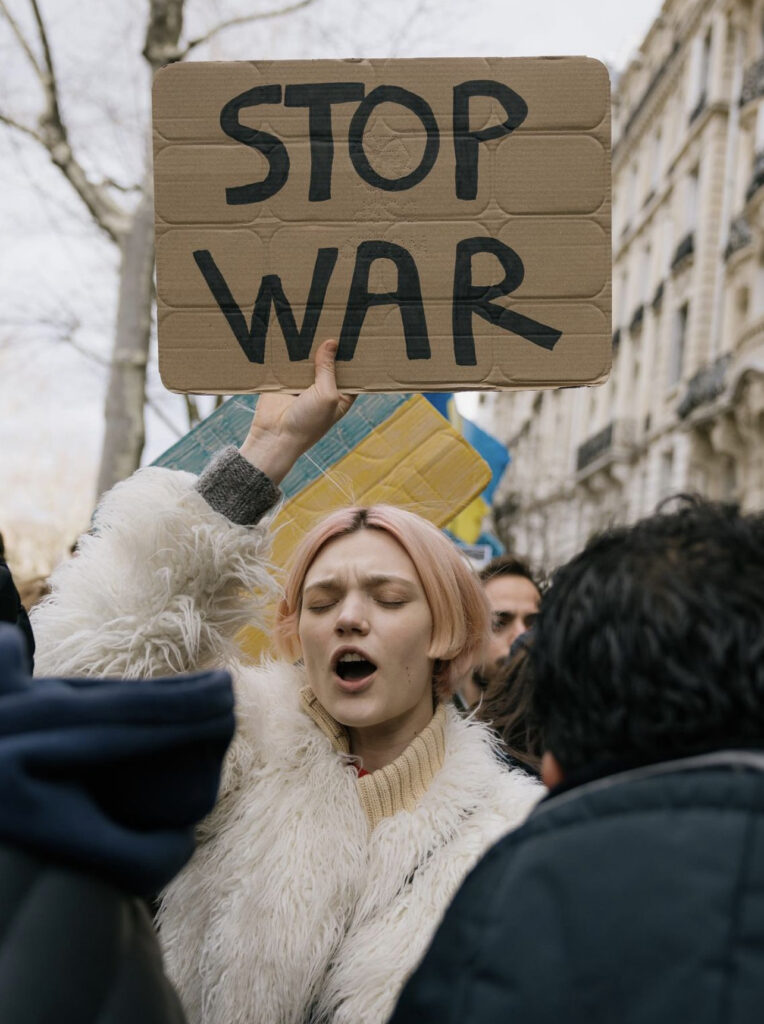 Quite a few Ukrainian models found themselves in a difficult situation, choosing to walk the runway shows of their dreams while their own homes were being bombed back home. Kristy Ponomar caused a stir on social media when she shared a photo of herself crying backstage at Prada’s Milan fashion show the day Russia declared war on Ukraine. By the time she arrived in Paris, her mom was hearing bombs go off in their house. Model Pasha Harulia was confirmed exclusively for Miu Miu (she would only walk the one runway show) so that she had time to perform some activist work throughout the week in Paris. But still, she told Vogue, that she had a hard time getting herself together for the show. 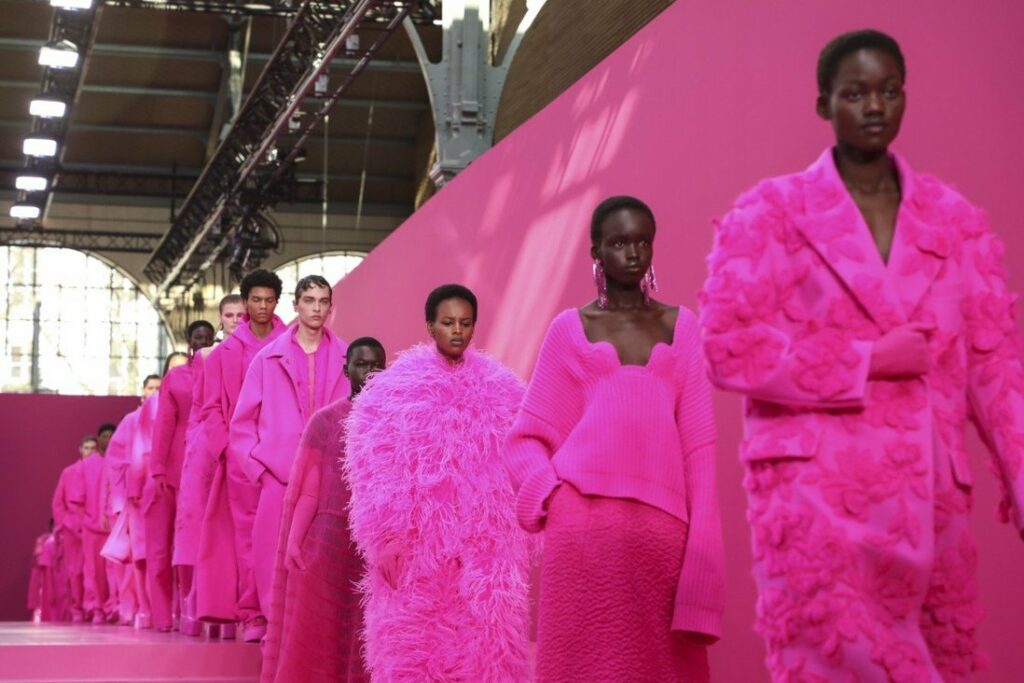 Valentino seemingly didn’t get the war memo, and went out full bright and pink at PFW. Actually! The runway, the backdrop, and all the featured looks, all 81, were all entirely pink. The monochrome was an ode to “La Vie en Rose.” The brand’s fashion intent was to take the color out of fashion and focus on silhouette and styling, which it did ever so flawlessly. 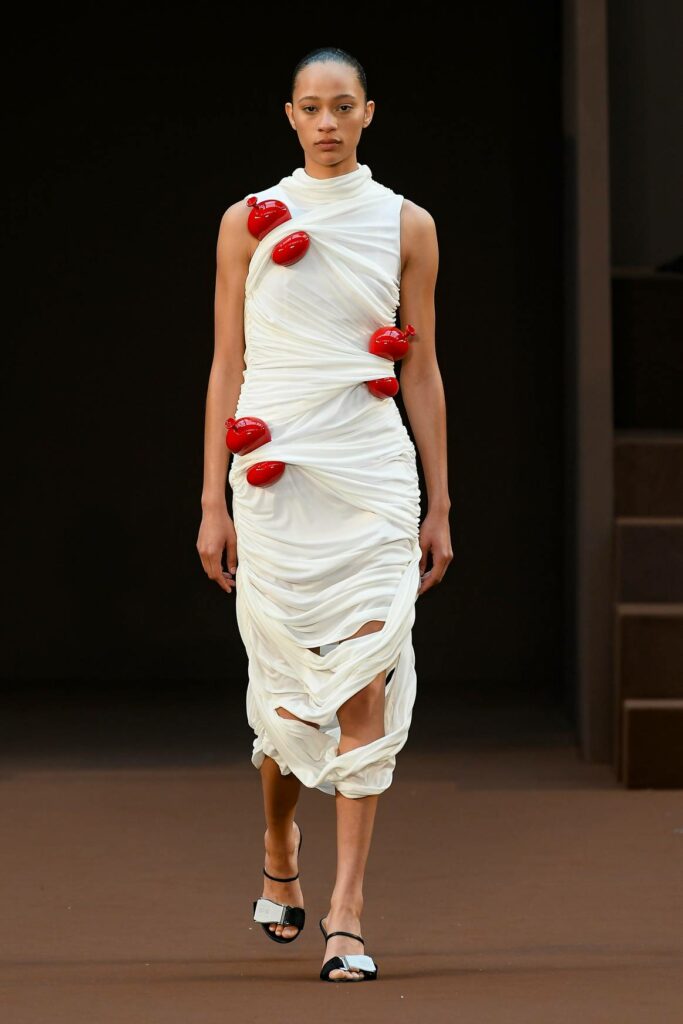 Where would fashion be if it weren’t having fun? The Spanish house, Loewe,  has become a true fashion-week favorite throughout the years, and this season it took a sculptural approach. The runway looks featured stilettos, plastic pots, and even breastplates atop garments to accentuate its absurdity. “Fashion that entices a reaction,” the show notes underlined.

Fashion reminds us that while the world might be in turmoil, there is always a need for aesthetic pleasure and beauty. And while some designers chose to comment on current issues through their platforms, others chose to carry on with what they do best — make clothes — and also, along the way, giving the world a little bit more of their own artistic magic as a necessary distraction during difficult times.