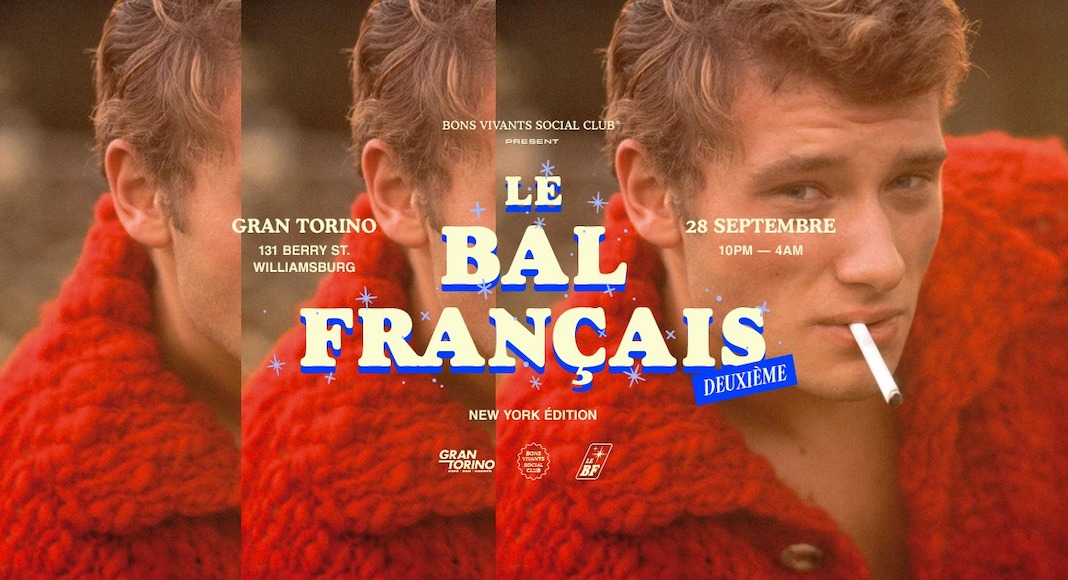 So you think you’ve experienced the best of France’s nightlife because you’ve been to a few clubs and noisy bars in Paris and Marseille? That’s just one kind of French party, and it’s far from the best kind.

An authentic French party comes to New York in the form of Le Bal Français on September 28 at Gran Torino (previously Diviera Drive) in Williamsburg. Now in its second edition, the first Bal Français in June attracted over 500 people to the midtown bar 5th&MAD for a French party that kept the bass pounding until 4 a.m.

Whether you’re French, a Francophile, or you don’t know where France is, Le Bal Français is a much-needed departure from the New York party scene.

Free to attend (with an RSVP on Eventbrite), the party will feature French classics from the 70s, 80s and 90s and a few hits from the 2000s and 2010s. Think recent chart toppers by Aya Nakamura and Vegedream, but also French classics by Yannick (“Ces Soirées là”), Justice (“D.A.N.C.E.”) and MAGIC SYSTEMS (“Magic in the Air”) —  the last two of which are known well Stateside, just not as songs by French artists.

“Le bal français” (the French ball) is a typical party from the countryside of France. “You have a big tent that can fit like 500 people, and you just bring a DJ in,” explained Maxime Aubin, one of the event’s cofounders, who hails from Saint-Etienne, a small city in the Loire, in an interview with Frenchly before the first Bal Français in June. “Friends, alcohol, a tent, and a DJ from the village. You dance and sing classic French songs, songs that everyone knows, and just having a really good time with close friends and people that you like. It’s a great atmosphere.”

A bal français is an entirely different side of France, one that Americans rarely get to experience. It’s local, familial, celebratory and truly authentic to French culture. To attend Le Bal Français in New York, it’s a “chance for Americans to experience a new aspect of French culture,” emphasizes Aubin.

The founders expect this edition of Le Bal Français to be bigger and better than the first, in part thanks to the new location of Gran Torino. “It’s the perfect spot with a big terrasse, four bars and two rooms,” notes Valentin Delouis, cofounder of Le Bal Français with Aubin. “Drink prices are lower than in Manhattan, too.”