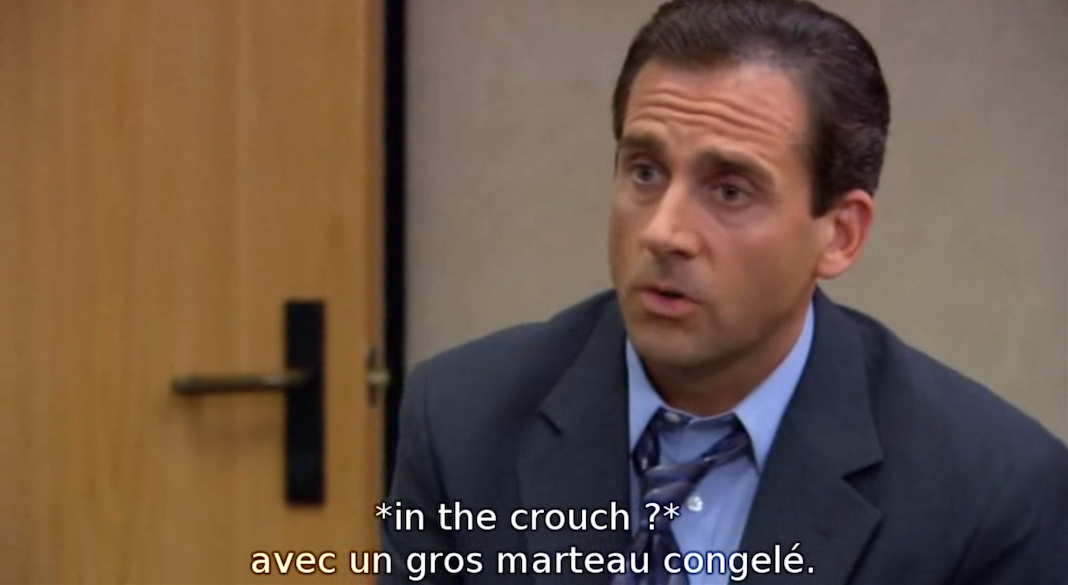 Netflix Has Terrible Subtitles. French Translators Want to Do Something About It.

Since the advent of streaming platforms and the acceleration of production rates, misinterpretations, shortcuts, syntax errors and butchered expressions have multiplied. After being mocked repeatedly for translation failures on social networks around the world, Netflix is now on the chopping block of its subscribers and captioning professionals. In France, the Association des traducteurs-adaptateurs de l’audiovisuel (ATAA) pointed out the technical errors — bad placement, absence of quotation marks, unreasonable speed of reading — of the French subtitles of Alfonso Cuarón’s triple Oscar-winning film, Roma, produced by and available to stream on Netflix. “The words are translated literally one by one, without any real understanding of the meaning of the dialogue, which makes it seem like the work of a machine”: for example, “Il m’envoyait toujours des lettres” (he always sent me letters) instead of “Il m’écrivait souvent” (he often wrote to me), or “Adios,” several times translated as “Bye.” Not to mention a medical gem: “I will consult you” instead of “I will check you.”

Sylvestre Meininger, Vice-President of the ATAA, wrote this detailed list of subtitling issues in a very thoughtful statement. “I think that the platform subcontracts this work to unskilled and low-cost professionals, perhaps even fansubbers (Editor’s note: fans who take the initiative to subtitle their favorite programs for free),” he says, which is incomprehensible from a technical and artistic point of view. Netflix, which spent 25 million dollars in promoting the film, clearly did not want to spend $4,000 to $5,000 on quality subtitling in French.” It should be noted that apart from some programs purchased by Netflix and which come with their own subtitles, 80 to 90% of the catalogue requires translation and subtitling work. However, the huge volume of series and films broadcast worldwide forces the streaming giant to deal en masse, and often in a hurry, with the issue of subtitling. And, despite its efforts to establish satisfactory quality standards for dubbing and subtitling in a highly competitive market , sometimes the work is sloppy.

In March 2017, in order to optimize the production chain, Netflix attempted to fully internalize the subtitling process by launching the Hermes platform. Its mission: to recruit “the best translators in the world.” To apply, you don’t need a diploma or certification, just a multiple-choice test (which has questions for about 4,000 expressions) and to take a subtitling test. If successful, a Hermes identification number (and a confidentiality contract) would then  allow for access to the programs to be translated. Everyone could pick what they wanted on a first-come, first-serve basis. “A real battleground,” recalls Élodie, who successfully passed the test to gain access to the platform. “With my identification number, I’d chose one episode or another to translate with very short deadlines, which leads to shortcuts and inaccuracies. It was necessary to work very quickly to meet the demand.” “I have ATAA translators who did the test and failed because they were too thorough and therefore too slow,” adds Meininger. “The criteria was not competence, but speed. However, no multiple-choice test in the world can recreate the subtlety of the choices that are made in translations.” Issues with the system quickly appeared and some candidates questioned the automated nature of the tests, suggesting an algorithm. A year later, Hermes closed.

Since then, it has been difficult to obtain a clear description of the subtitling process. Officially, according to a spokesperson, Netflix has changed its mind and now outsources the work, relying on local professional partners, called “vendors.” The California-based company assures its understanding that it was better to leave subtitling to the professionals. Thus, in France, the post-production company VDM is one of the elite vendors (“preferred fulfillment partners“) selected by Netflix worldwide. At VDM, we’re told that the platform requires a high quality of service. The company’s work is regularly measured using key performance indicators, and very high technical and project management standards must be met. Netflix closely monitors social networks and any criticism or translation error reported by subscribers is immediately forwarded to the vendor. For the rest of the process, it’s impossible to know more given the confidentiality agreements signed by our interlocutors.

Is it because they’re not one of the vendors that other subtitling professionals criticize the system set up by Netflix? According to several of them, the platform actually used Hermes to build its own database of subtitlers. “Today, we no longer subtitle for Netflix, which manages this activity through a parallel network established by stealing translators from many people. The whole profession is in agreement on the mediocrity of this owed service and the platform’s steamroller methods,” says an executive in an audiovisual company in the sector, who wishes to remain anonymous for fear of losing the dubbing contracts (unrelated to subtitling) that Netflix has with him.

In any case, there is still a real artistic vagueness concerning certain content whose translated subtitles leave something to be desired. According to testimonies we’ve gathered to try to understand the ins and outs of Netflix’s subtitling process, translators must operate exclusively online, on software that looks like traditional subtitling interfaces, with less freedom and more automation. They’re timed and do not have the option to save their work. This is then sent to the vendor for validation. Most of the time, the process is normal, but some gross errors raise questions: is there systematic, human intervention or is the check done, at least partially, with a software? One thing is certain, the subtitler cannot dispute the changes made to his work, to which he has no right. “What can we conclude from the careful examination of the errors made on Roma‘s subtitles?,” muses Meineiger. “That the translator is not a professional? That he shouldn’t have access to the film? That he probably worked from English subtitles and not from the actual dialogue? That it is also possible that it’s a vaguely proofread machine translation? That the entire translation process implemented by Netflix does not meet any professional standards?”

Netflix does not have a budget specifically allocated to translation, which is paid per minute of film and not per minute of actual work. Traditionally the practice in the sector is to pay by subtitle. When we know that the purpose of a subtitler is to create subtitles with all the subtlety of an original language without altering meaning, we can deduce that working time is affected by a factor of two between an action film without much dialogue and a film with lots of dialogue, such as a Woody Allen or Quentin Tarantino film.

According to one translator, who prefers to remain anonymous, “the rate for subtitling in French for an elite vendor working for Netflix is $7.20 per minute of film, or just over 6 euros at the current rate. So for a standard 45-minute TV series episode, which requires one week to do a good job, a translator would receive 270 euros gross. For a newcomer, the rate could be reduced to 3 euros per minute. It’s therefore conceivable that Roma‘s translator, Khaled Benhaj, mentioned in the credits, would have received about 810 euros. In France, translators, who have author status, manage to be paid better, which is not the case for our European neighbors, such as Croatia where it is not uncommon to be paid 1.5 euros per minute.”

And what about Netflix subscribers, in all this, what do they say? On French social networks, people have been using #TraduisCommeNetflix, or submitting to the Tumblr “Les sous-titres de la shame.” In the United States, the deaf and hard of hearing community, who are the primary users of subtitles, complain about their poor quality, often consider them “inappropriate,” “incomprehensible,” and likely to spoil a series or film. When surfing the Internet, it’s easy to find blog posts that, with examples, denounce incoherent or misplaced or even outright censored subtitles, such as in Breaking Bad, which is much less vulgar in the subtitles. For the time being, the ATAA, which has met with Netflix officials three times, is officially calling for “a sincere and constructive dialogue” at a national and European level. The profession is waiting to see what the policy of the future competitors — Disney, Warner and Apple — will be.

Asked several times over a period of two months to answer Le Pop Point’s questions, Netflix’s management provided — via an anonymous manager — some formal and general information without really explaining the multiple mix-ups or clarifying the exact nature of its current process: “Our control system and infrastructures are solid. We also work hard to understand the impact of our subtitles and how they are perceived by the public. We are aware that there is a lot of room for improvement and we are constantly looking for ways to improve ourselves and the consumer experience. This is where quality and volume meet, and we continually strive to improve the quality of the individual experience despite the scale we work on.”

In short, marketing jargon that needs no translation.

This article was first written by Jean-Luc Wachthausen in French and published on Le Point.