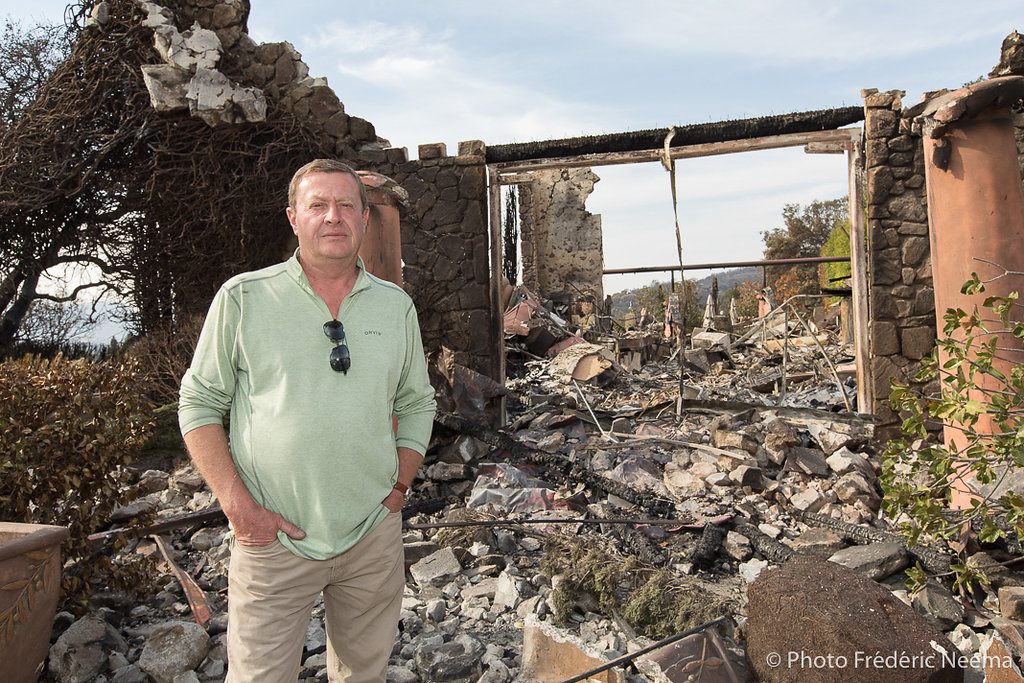 A parasol and a garden table in a parking lot. That’s all that remains of the Signorello Estate, one of Napa Valley’s prestigious wineries. “Here was our tasting room, our offices, and the owner’s apartment,” says winegrower Pierre Birebent, pointing his finger at the remains of the building, completely destroyed by the flames. Only the terrace of the swimming pool, a wall with blackened stones, and two ochre-colored columns remain. The rest is ashes.

Signorello, located south of the Atlas Peak, is one of the 20 or so farms devastated by the Northern California fires that have been raging since October 8. “I got a phone call at 11:00 pm saying there was a fire in the south of the valley. I jumped in my car. When I arrived, the garden was on fire. With two of my employees, we tried to put it out, but the fire and smoke were too strong. We had to retreat. Then the building ignited.” In twenty years of taking care of this estate, the winegrower has “never experienced anything like this.”

Birebent is just beginning to accept it. “On Thursday, when we were able to access the estate and see the damage, the tears flowing. A week later, you have to get used to the idea. That’s what insurance is there for.” Luckily, the 15 hectares of vines were not affected. “The fire stopped right in the vats. Go and find out why…”, he said, pointing to, without believing too much, a crucifix hung at the top of a vat by his “very believing” employees.

The vats hold 19,000 liters of a grape variety of Cabernet Sauvignon, harvested at the end of September, just a week before the fires started. “95% of the harvest has already been harvested,” says Birebent. The vintages of the previous years are also safe. “Our stock is in a warehouse south of Napa.”

On average, a bottle of Signorello sells for about $150 dollars, but the winegrower fears that the currently fermenting juice will be affected by “the smoke taint” (the smell of smoke). To find out, he’ll have to taste and analyze each of the vats. “If that’s the case, we’ll make a special vintage called Miraculous Wine,” he muses.

Jean-Noël Fourmeaux was not lucky enough to have the majority of his harvest already harvested. “My three vineyards are on Mount Veeder, the mountain that’s still burning,” sighs the owner of VGS Château Potelle, who is still waiting for a phone call from the sheriff giving him the green light to access his vineyards. “Last Thursday, from the infrared map images, I could see that 50% of my vines had burned down, for the rest I still don’t know.”

Harvesting of his various Bordeaux grape varieties – nearly 60 hectares – takes place later, since the vineyard is situated at an altitude of 2,300 feet (700 meters). In the valley, the harvest starts in mid-September, and in the mountains it usually starts in mid-October. “We were gathering when the fire broke out on Sunday [8 October]. When we finished at 6am, the roads were blocked. We had to make a detour to get to our winery,” says Fourmeaux.

But when he arrived at his Napa production plant, the electricity was out. “We put the grapes in a cold cellar and had to wait two days before we could start the transformation.” The part of Fourmeaux’s harvest that could be saved was quite small. “It’s barely 10% of our vineyards, it’s nothing at all!”

Without knowing if some of his plots survived the flames, the winegrower isn’t deluding himself. “The vines have been bathed in this smell of smoke for days. There are treatments to remove the taste of smoke but they reduce the quality of the wine,” he laments,  conceding that “the wines will certainly not have the same character as in previous years.”

For the plots of land that have gone up in smoke, it will take five years to replant and for the vines to bloom again. “It takes between $100,000 and $125,000 to replant an acre [0.4 hectare] of vineyard,” says Fourmeaux from his tasting room located in Saint Helena, 20 miles north of Napa.

“We wait for visitors with a big smile but it’s dead here, there are no more tourists. We are going to have a catastrophic month,” he exclaims, anticipating a loss of $240,000 dollars of income in October, for his wine tasting class. It goes without saying that this year he’ll make “not much red.”