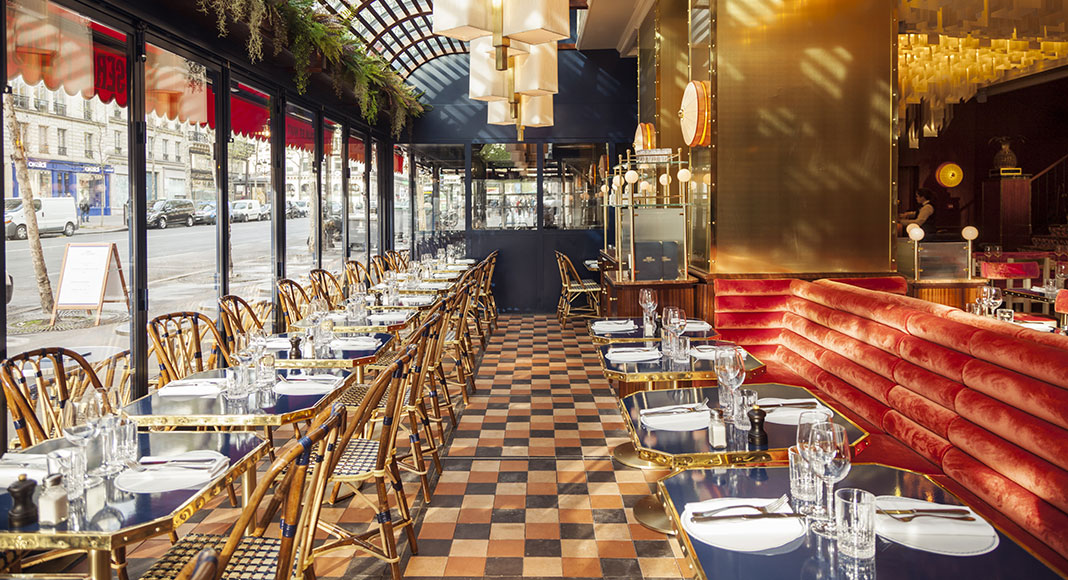 Georges Eugène Haussmann may have destroyed tons of medieval architecture all throughout Paris, but he also created a new urban plan, making way for new institutions. One of the establishments that rose up on his Grands Boulevards was Le Grand Café Capucines, an Art Nouveau brasserie that, until recently, inspired a melancholic longing for the past.

The legendary Paris café, designed by Jacques Garcia, reopened in early April with a new appearance. Hugo Toro and Maxime Liautard, of Toro & Liautard, updated Le Grand Café Capucines with a contemporary design, while still conserving the nostalgia of the old Paris.

Neighboring Opéra Garnier, the Olympia and the Grand Rex in the legendary 9th arrondissement, the bistro is a proper looking French cafe where you can get a coffee or share a plate of oysters at any point in the day (it is open 24/7). “Comme les Grands Boulevards, le Grand Café Capucines ne dort jamais,” says the menu (Like the Grand Boulevards, Le Grand Café Capucines never sleeps). The service is traditionally French too, with waiters who have perfected their craft in the establishment, which has been open since 1875.

As the opera gained status, Le Grand Café Capucines was one of the first to cater to its clientele. It became a place where you could easily cross paths with actors, singers, and, of course, loyal patrons at neighboring tables discussing the arts late into the night. Its red velvet chairs, murals, and a glass roof have made it worthy reputation as one of Paris’s most charming Art Nouveau cafés.

Ultimately worn down over the years, the cafe was finally forced to close in February for a long overdue renovation. It hasn’t closed since the Lumière brothers showed their first cinematographic projections there in 1985. (For comparison, we now live in the world of VR and 3D.)

Toro and Liautard were charged with the renovations in part because their style is often a patchwork of old and new. Renowned for their work at Klay Saint Sauveur, La Perruche, and BB Restaurant, the bistro project was a totally new challenge: they had to make their mark on an already established institution, carefully crafted by Jacques Garcia.