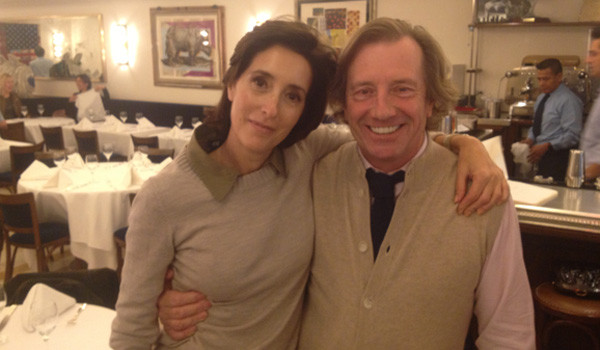 He’s at the helm of a prestigious restaurant, which boasts ultra-rich and famous investors, and yet…

And yet, Philippe Delgrange can’t help but feel nostalgic about the former Bilboquet – his small restaurant on 25   East 63rd Street that, for 27 years, was the St. Tropez of the Upper East Side.  It was the place to see and be seen; where millionaires, celebrities and starlets rubbed elbows and enjoyed the famous Cajun Chicken served up by a very enthusiastic French staff.

“It was an incredible jewel of a restaurant,” sighs the restaurateur regretfully.  Unfortunately, it had to be closed because the owner of the building refused to renew the lease.  Delgrange complains, “Here all anyone cares about is money, money.  And I’m not the only one; when La Goulue closed it went unnoticed!  Even when Elaine – Elaine! – closed (following the decease of the legendary owner, Elaine Kaufman), no one took over.”

At any rate, they’re all disappearing.  The Bilboquet, however, is here to stay.  Despite the owner’s nostalgia and “this increasingly vulgar world,” in late October Philippe Delgrange reopened a new Bilboquet, just three blocks from the former restaurant, on the ground floor of the FIAF (French Institute Alliance Française).  It is three times the size (seating for 100, compared to the previous 35), and was born under a wealthy star.  Delgrange currently has three investors: millionaire Ron Perelman, musician Eric Clapton and real estate promoter Steve Witkoff.  “They were clients, and they fought for me to keep the restaurant when the owner of the building forced us out.”

Clapton has been a regular client for twenty years.  The relationship with Ron Perelman, however, has a more chaotic beginning.  It started with Perelman filing a complaint, citing noise-related disruptions caused by the Bilboquet’s highly boisterous crowd and patrons prone to singing, whom he could hear from his neighboring townhouse.  The two men later reconciled, to the point where Perelman even attempted to purchase the building that housed the former Bilboquet in order to save the restaurant.  Unable to do so, he is now an investor in the new restaurant.

“The challenge was recreating a space that would become the Bilboquet, which was not easy,” sighs the restaurateur.  However, decorator Carolina von Humboldt took up the challenge.  Seated next to Philippe Delgrange at one of the tables she designed and had custom-made in France, she smiles when her boss admits that he often changes his mind and acknowledges that he isn’t “easy”.  “We had quite few arguments,” she says, “but what was most important to him was to avoid doing things that didn’t truly “say” Bilboquet.

The famous tin bar, the centerpiece of the former establishment, was reconstructed based on the same model, “but on a much larger scale.”  The lamps were found at antique dealers “around the world.”

Is the boss happy, then? “The space has the potential to become quite unique…We’ll see.”  Well at least he won’t be criticized for using the same old marketing speak.  But he doesn’t care, “The Bilboquet was never a huge profit-maker.  It was beyond that; it was more like a group of friends, a group of people who were on the same wavelength.  The Bilboquet was where the most rich and famous came together, but I wouldn’t let everyone in.  There was no sign outside, we didn’t answer the telephone.  It was something else.”

What really worries the restaurateur is this: will the “Bilboquet spirit” survive the relocation and, above all, the pressure?  “The rent here is exorbitant, that’s the problem.  You have to be crazy to set out on such a venture.  We have to make an annual turnover of $8 million to pay the bills…”  The boss/friend/group leader has become, despite himself, an entrepreneur.  Two other Bilboquet restaurants have opened in Dallas and Sao Paulo, Brazil.  Another is in the works in Atlanta.  “In today’s world, you won’t make it with only one restaurant…”