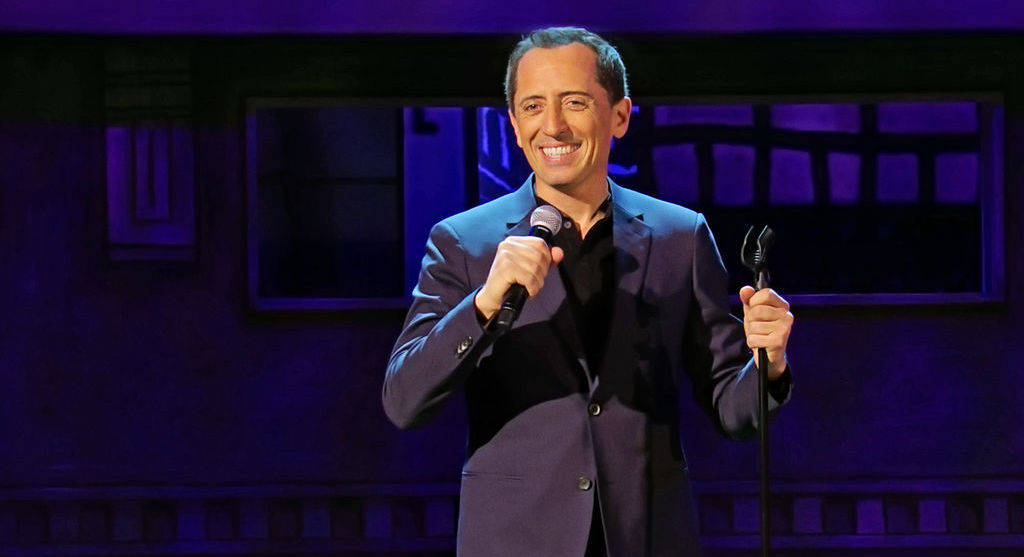 Gad Elmaleh: “I Will Never Become an American Comedian”

“This project has been a crazy journey. It’s been a long way.”

“A long way” is an understatement for the journey comedian Gad Elmaleh has been on since he moved from France to New York nearly three years ago to restart his career and try to become famous again. “You totally step out of this comfortable life where you sell out arenas,” Elmaleh explains to Frenchly in a phone interview. And then— “cut to one day performing at The Comedy Cellar in front of 100 people who have no idea who I am.”

Since he arrived stateside in 2015, the Moroccan-French comedian has performed all over the country, had an English language Netflix special, and has a Netflix series in the works. Has he achieved his American dream yet? “‘Achieve’ is a big word,” he muses. “We will talk about this in a few years when I’ll be very old.”

His first English Netflix special, American Dream, out March 6, is a hilarious oral yearbook of his experience in the US so far. “Everything I’ve been writing in my career has always been autobiographical,” explains the comedian. The hour-long standup mixes original English jokes and translated French jokes. Besides the language translation, the delivery must be adjusted as well. “In France we have long set-ups, charming stuff, a lot of physicality, puns, plays on words, music and some dancing, and jokes in the middle,” says Elmaleh. “American standup is very dry, guys are standing up there on the stage telling jokes back to back. Americans like efficiency.” Unwilling to fully relinquish the style of French comedy — “I am who I am, I will never become an American comedian” — Elmaleh mixes French physicality with American efficiency for his delivery.

Netflix has proven itself a strong partner of Elmaleh’s, signing him for two standup specials and a series, Huge in France, currently in development. The series is about a comedian, played by Elmaleh, who leaves fame behind in France to spend time with his estranged teenage son in LA. “It’s about a father who wants to reconnect with his son, culture shock, co-parenting with an ex, starting comedy, and dating — [which is] very difficult for me in the US, it was easy in France,” he finishes, sounding slightly vexed. The series is true to life for Elmaleh who left France to restart his career and has a teenage son pursuing modeling in LA. The autobiographical-but-fictionalized teenage son plot line is an “emotional” one for Elmaleh: “Having a cultural shock with your own family, it’s the worst. I mean, you’re his father but when I want to kiss him he gives me a hug. Who is this guy?”

It’s no wonder Elmaleh wanted his Netflix show to be about, of all things, family. “The most difficult part of this whole challenge is that I miss my family,” he says. Here, the comedian is interrupted by the delighted screams of his four-year-old son, and his son’s cousin — it’s Friday night Shabbat dinner at his parents’ place in Paris. Elmaleh may have endless ambition, but his family is his Achilles’ heel: “I can handle Pittsburg at midnight alone, but when I miss my son I can’t handle it anywhere,” he moans, sounding truly pained. “Even in the sexiest and most fun city, when I miss my little boy, I feel stupid. I’m his dad and I’m not there. But, c’est comme ça, c’est la vie.”

New Yorkers who are disappointed Huge in France isn’t set in Elmaleh’s adopted hometown are not alone in their disappointment. “I wanted to shoot in New York because I love New York,” the comedian explains. “I was like, ‘I’m going to shoot and go to The Comedy Cellar at night,’ and I was thinking about my really cool comforts, downtown Tribeca, life in New York City, my whole little paradise. And then the writers said, “we get it but, but…,” he laughs, “‘we think it could be a lot funnier in LA.'” He wasn’t convinced right away, but with the argument that LA is much less like a European city than New York and a few sample scenes modeling the extreme cultural differences between Paris and LA, he saw their point. “Of course you want to see me in a yoga class, of course you want to see me dating a stupid Californian fake girl, of course you want me to talk with a waiter about how spiritual LA is,” he exclaims. Ever the comedian, prodding at LA culture was too tempting to refuse: “I want to make fun of all that.”

Since he arrived in the US, all of his comedy has highlighted his status as an outsider. Huge in France will be the end of that era. “My next show will not be ‘Ehh, I’m from France and—’ no, that’s it,” declares Elmaleh. “I’m the guy from France born in Morocco, but I’m also just a comic who wants to observe stuff and be funny.” Elmaleh’s French language comedy is observational of daily life, evoking comparisons to Jerry Seinfeld whom Elmaleh calls a mentor, good friend, and brother. “I would love to do jokes about being a father, life in New York, relationships, and what’s going on in America without always [using] the outsider perspective,” he affirms. “This is the work I want to do. I want to move forward.”

Ask Elmaleh if he’s going to restart his career again in another country, he’ll laugh. “Oh yeah, I’ll go to China two years from now and start over in Chinese and— no. The good thing will be to go all the way with this project and see where it’s going to lead me.” That said, he’s not planning for smooth sailing here on out. “I will always challenge myself. It will not always be by moving to another country, but maybe with writing with another series, with another movie, maybe with going on Broadway with a show.” It’s certain that no matter how successful he is or what else he’s doing, Elmaleh will always find his way back to standup. “I need to perform,” he insists. “Even when I’m shooting my show in LA, I’ll go to The Comedy Store, I’ll go to The Improv, to The Laugh Factory, because I need to perform. It’s in my DNA.”