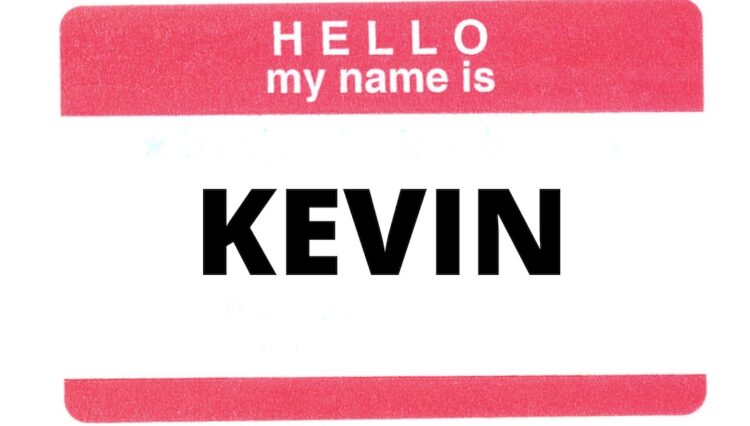 If you know anyone who has recently decided to name their children something like Evelyn, Theodore, or Mabel, you may be wondering how we got stuck in a time warp and dragged back to the 1920s. Conventional baby naming wisdom cites the “Hundred Year Rule,” a theory that names take about a century to cycle back into fashion. Public figures (think actors like Florence Pugh) and the children of public figures (Archie and Lilibet Mountbatten-Windsor, for example) can drag even the stuffiest, most moth hole-riddled of monikers back into the popular imagination.

But what about names stuck in the purgatory between trend cycles, and the poor suckers who have them inked on every resume, drivers license, and diploma? What about the Barbs, Harolds, and Sallys of the world? Well, a specific group of people in France know exactly how bad it is: they are the Kevins.

The name Kevin (usually spelled Kévin) came into popularity in France in the early 1990s, thanks to the pop culture influence of actors like Kevin Costner, Kevin Bacon, Kevin Spacey, and the character of Kevin McCallister (played by Macaulay Culkin) in the 1990 classic Home Alone. In 1991, Kevin was the most popular name for baby boys in France. But in the intervening years, the name suffered a steep decline, and a French parent today wouldn’t dream of using it. It’s become a symbol of tacky American influence, not trendy, not classic, but a memento of a specific point in cultural history that France would rather forget. Kevins in France are laughed about in the way that Americans might mock a Chad or a Karen.

The spike in Kevins in the early 90s coincided with the dissolution of an old set of naming regulations which required French parents to choose their childrens’ names from a pre-approved list provided by the French government. This practice was abolished in 1993, but the French government still has control over what you’re allowed to name your precious bundle of joy. Names can be rejected… and some are, every year. If your chosen name doesn’t get the Jean-Louis-Alexandre-Gabriel stamp of approval, you’ll have to go to court and select a new name. If you don’t show up for your court date, the judge will name the child for you. In 2015, when a set of parents tried to name their daughter Nutella and didn’t show up to defend their choice, the girl was named Ella instead. Other famous examples of rejected names include Mini Cooper and Fraise (French for “Strawberry”). But many other less-offensive names have also been put on the chopping block. A big regional win took place in 2019, when a set of parents won a court case that allowed them to name their child Fañch, a Breton name discriminated against because of its tilde (the symbol over the “n”). The character, used in other Romance languages like Spanish and Portuguese, is not recognized in France.

The whole procedure feels antiquated and paternalistic, and conjures the image of a priggish, blue blooded group of Parisian grannies sniffing derisively over the fate of a new generation and how they are identified. The most positive way to look at the situation is that names are rejected on the grounds that they might present problems for the children, like mockery or discrimination. This might seem like another way to assert government to assert itself and the costs of a weird name totally blown out of proportion… until you ask the Kévins, some of whom do face real discrimination in France. Kevins get rejected socially, romantically, and even professionally—with a 2015 study indicating that Kevins have a 10-30% lower chance of getting hired.

So what is a Kevin? A Kevin is an uncouth, low-class, vulgar, and semi-literate caricature of everything the French hate about America, shellacked onto one of their own. It’s often described as being “beauf,” a term for a chauvinistic, unrefined hick deriving from the French word for “brother-in-law” (beau-frère), a category of mockery in its own right. Picture: that one family member hanging around the holiday party, making inappropriate jokes and mansplaining far-right conspiracy theories. This association has led to countless negative Kevin memes circulating the Francophone Internet, most of which are too raunchy to include here.

The problem is that children named Kevin at the height of the name’s popularity are now thirty, and attempting to live real adult lives that are impeded by stigma. Kevins are doctors and lawyers and national legislators, people who are just trying to do their jobs while knowing that every introduction will lead to a sly smile and a suppressed giggle.

One of these many professional Kevins, French filmmaker Kévin Fafournoux, is on a quest to change France’s Kevin-phobia. In June of this year, he started a crowdfunding campaign to raise €8,000 to make a movie called Sauvons les Kevin (“Saving the Kevins”). The campaign ended up more than doubling its goal, as Kevins around France crawled out from the muck to show a surprising display of solidarity.

The goal of the project is to create a 52-minute film explaining just how the Kevins found themselves in this ugly French situation. Though they were once in fashion, Fafournoux explains in the fundraiser’s description, the Kevins have since suffered a terrible decline. “I started to see more and more sketches and articles about my name, which has come to mean redneck, geek, illiterate, slacker, subject of mockery and hateful comments,” he writes. “Even if I laugh about it, the fact remains that all of this has an impact on my life and on the lives of thousands of other Kevins –whether it is on our confidence, credibility in professional life or our relationships.”

It’s not clear yet when this film will be available to watch, but it will be interesting to see whether Fafournoux achieves his goal of “bringing Kevin back into style.” And if not, he can always simply wait another seventy years.