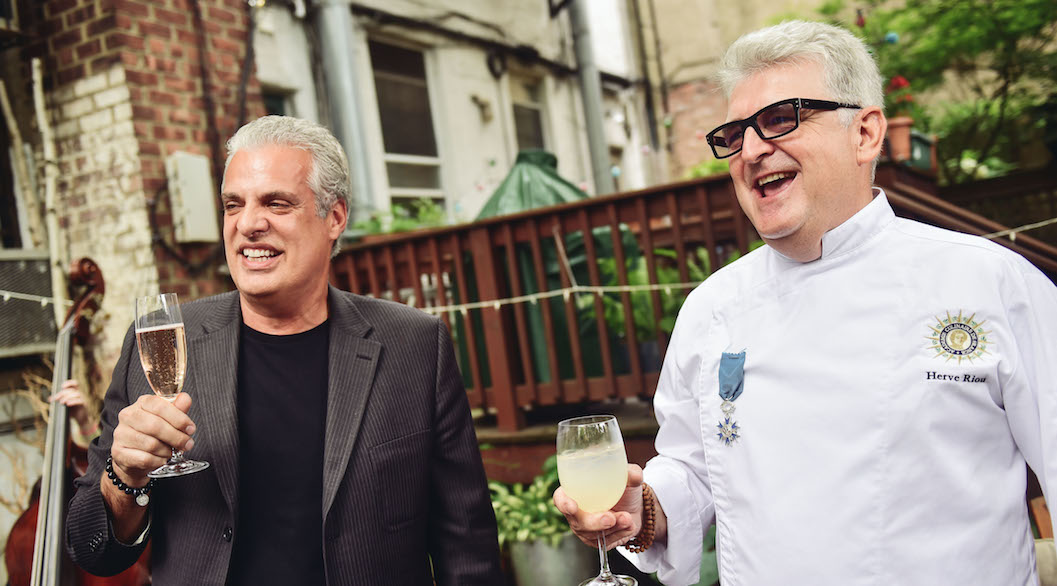 Hervé Riou and Eric Ripert are Combatting Violence in the Kitchen

“I admit it, I haven’t always been a saint.” Chef Hervé Riou (Salmagundi Club,Naturally Delicious)  says he “never hit anyone,” but he’d raised his voice more than once against his employees. One fine day in 1992, his sous-chef “opened my eyes.” Riou explains, “He told me: everything you bring into the kitchen – violence, pleasure, euphoria, depression, distress – has a direct impact on the employees and the food. We pass it on to the food.”

Today, the Frenchman and his friend Eric Ripert (Le Bernardin) are going on a crusade against violence in the kitchen. They’ve created a charter of good conduct (see below) designed to bring peace to kitchens, stressful environments where brutal gestures and violence or abusive words are widespread. “This charter is not the law. There are already laws in place against verbal and physical abuse in the workplace, but it’s a reminder for the leader about what he needs to do to inspire and help young people find their voice,” says Ripert.

Riou came up with the idea for this code of four articles by reading the “Manifesto of French chefs for the respect and physical and psychological integrity of young cooks” by Michelin-starred chef Gérard Cagna. In this text, published in November 2014 and signed by five Meilleurs Ouvriers de France (MOF) including the head of the Elysée Guillaume Gomez, he calls on his culinary peers to “refuse the normalization of small daily violence as a hazing ritual,” and the kind of behavior considered “initiatory rites of passage.”

Riou and Ripert were both trained in hard kitchens. “During apprenticeship training in France, we take hits from spatulas, punches on the shoulders, burns,” recalls Riou. “Cooks enter the profession at a very young age. There is no air conditioning in the kitchens. They’re working like crazy and drinking like drunks. This system, combined with a lack of education, fuels violence. The chefs are violent because they haven’t known anything else.”

Ripert, one of New York’s top chefs, described in his autobiography 32 Yolks the psychological pressure he suffered at Jamin, under Joël Robuchon. When he arrived in the United States, he realized that this kind of management was counterproductive. “I was a verbally abusive leader when I arrived. Then I woke up. All the good employees had left. I was miserable. I realized that the brain couldn’t be angry and happy at the same time,” he says. “A raging leader will not do a better job than a calm leader.”

“We say that Marines are able to do what they do because they have a difficult training, but chefs don’t go to war. They’re going to the kitchen!” continues Riou.

The code of conduct was adopted by French culinary associations in the United States (French Culinary Academy of France, Maitres cuisiniers de France, Philanthropic Culinary Society), which have it signed by their new members. Riou hopes to convince the mayor of New York, Bill de Blasio, to put it up it in all the kitchens in the city.

While the chef believes that physical violence is less widespread in the United States than in France, it still exists, as the recent speeches of cooks and bar staff have pointed out against the backdrop of the anti-harassment movement #MeToo.

Ripert and Riou are both Buddhists, but emphasise that their struggle has nothing to do with religion. “This charter is universal and secular. It’s addressed to everyone. There is no religion behind what should be logical and basic,” explains Ripert. “Kitchens are hard. We have the stress of serving good food. It’s hot and humid, there are sharp objects. But there is no excuse for our industry to remain in the Middle Ages.”

Read the code of conduct below: 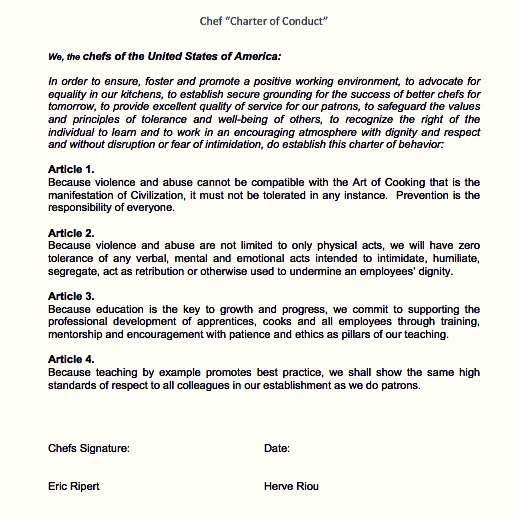