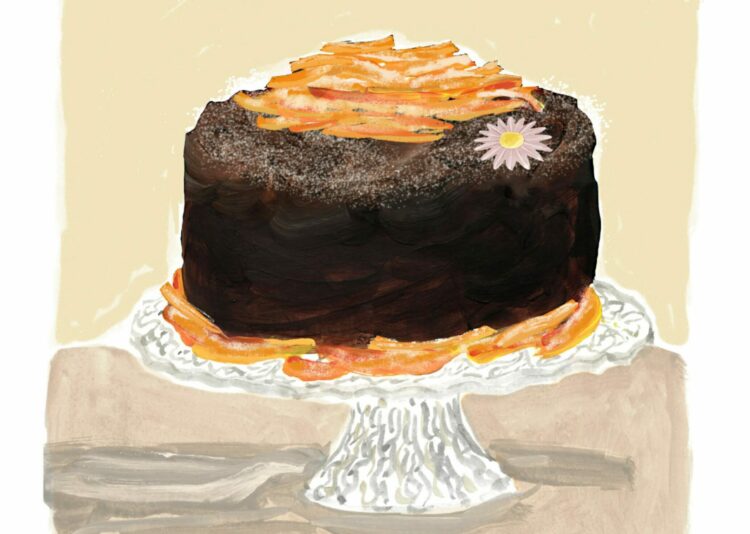 Despite being separated by 5,654 miles and nine hours in time zones, I was able to wrangle a Zoom cup of café with food writer and cookbook author, Aleksandra Crapanzano, to talk about her new book, Gâteau: The Surprising Simplicity of French Cakes (Scribner Books, 2022), and her unconditional love for France, where she grew up part-time as a child. 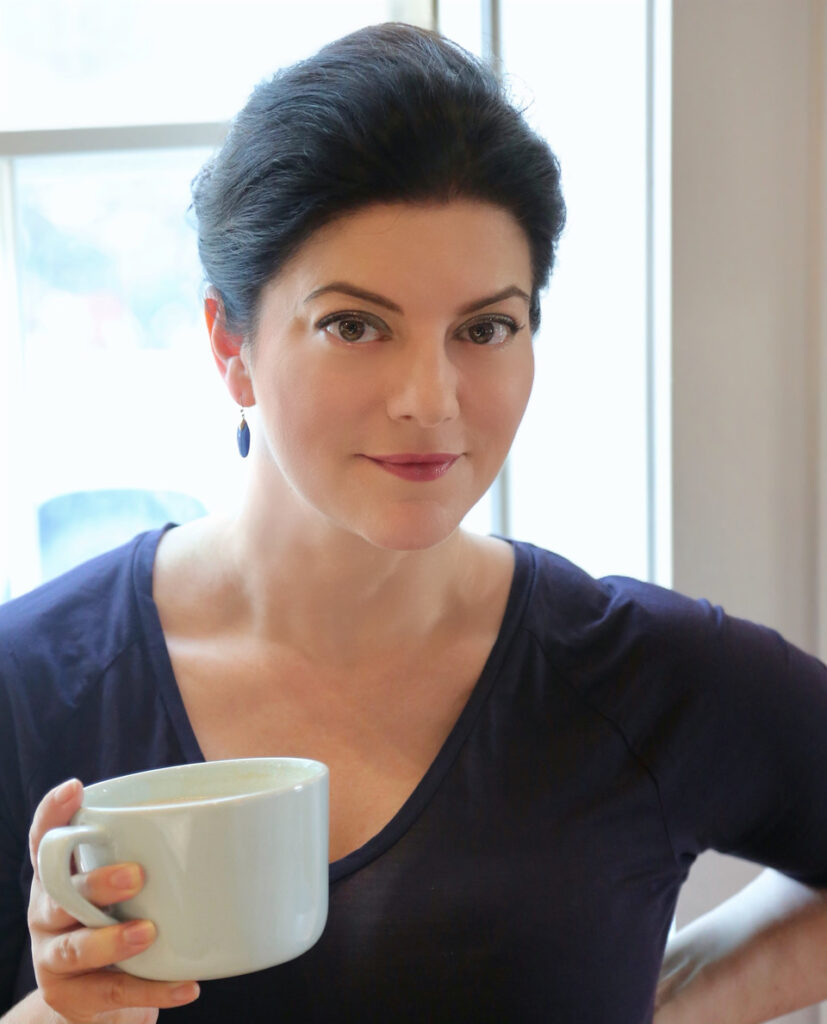 As the European correspondent for The New Yorker magazine, her mother, Jane Kramer, was constantly traveling between New York and Paris. When Aleksandra was ten, her father (an anthropology professor) took a sabbatical and the family moved to Paris, settling on the rue du Cherche Midi in the sixth arrondissement.

Sitting in her room one day shortly after moving, with the weight of having been separated from her friends back home and dropped into a new middle school in Paris where she knew no one, Aleksandra burst into tears. Her father wisely suggested they take a walk. He took her to the legendary boulangerie Poilane, where, beguiled by the heady smells of butter, flour, and baking from the wood-fired oven, she realized, “Ok, I can do this.” The woman at the counter gave her Punition cookie ( a kind of shortbread) and after taking a bite Aleksandra said she, “immediately understood there was something truly transformational about food and Paris.”

Aleksandra started exploring Paris with her hundred twenty-five-pound Bouvier de Flandre, Romeo, stopping every so often at the fromagers and boulangerie, sometimes walking to Café de Flor where the waiters would give him a bowl of water, after which they’d head to the crêperie. “I sensed I was really fully alive in Paris. It was a magical time, with so many incredible memories of food,” she recounts.

She soon made fast friends at the lycée (school), where, during the break, they would go to the pâtisserie and she’d buy two fresh out of the oven pain au chocolat.  After school, she was often invited to friends’ homes for le goûter (afternoon snack time) where the typical treat was often the traditional French yogurt cake.

Aleksandra grew up eventually, but traveled back and forth to her “second home” in Paris for most of her life.

While many of us may have fallen in love with France, Aleksandra also fell in love in France. That amazing story began when browsing at Shakespeare & Company, she came across the book, Bicycle Days, by John Burnham Schwartz, best-selling author and a professor at Harvard, where Aleksandra was then a Junior. As luck would have it, she’d once met Schwartz at a dinner party where each was with a respective date. Jump ahead a few months when, just arrived in Paris that morning and exhausted, her parents coaxed her into coming to lunch with Ward Just, one of the many celebrated expat American writers that Jane Kramer knew from her New Yorker orbit. Aleksandra walked in the apartment and was extremely surprised (yet pleased) to see John sitting at the table. It was a coup de foudre (love at first sight) for both of them. “Paris is a good place to fall in love,” Aleksandra points out.

It was while living together a few years later when she was attending the NYU Film School that Aleksandra began to cook seriously, to avoid the expense of eating out. Then came the lockdown of 2020 when she felt a particularly strong desire to return to Paris, but of course couldn’t. So, s­he began writing Gâteau as a way to get back to Paris.  Brimming with a perfectly curated collection of classic French cakes, the book is a primer for simply delicious desserts that are bound to evoke memories of Paris.

Unsurprisingly,  nine of the eighteen recipes in the first section are variations on that classic yogurt cake she loved as a girl, including lemon, almond, verveine and peach, as well as spelt flour chocolate and coffee yogurt cake, to name a few. Aleksandra told me, “to transform yogurt into a cake is a great trick to have in your back pocket…there’s a kind of confidence in having mastered simple classics, which show you that a couple of great ingredients can transform the ordinary into the extraordinary.”

“In France food is a true celebration of history,” Aleksandra says. And Gâteau certainly celebrates history, with some of its recipes (like Les Nonnettes and Gâteau de Savoie) going back to the Middle Ages.

Gâteau is illustrated with lovely whimsical drawings rather than slick studio photographs because Aleksandra did not want home bakers to feel that they’d failed if their cakes were not picture perfect. It’s about creating memorable moments baking delicious desserts rather than just being Instagramable, she told me. I told Aleksandra that I found the illustrations by Cassandre Montoriol to be delightfully retro, harkening back to a simpler slower, less showy food time. She responded, “­­­­Paris forces you to slow down a beat, to pay attention.” She shared that, in a way, “the book itself is about slowing down, starting from when you go to the market, you can take your time, not be distracted, and bring home whatever is in peak at the moment and celebrate it.”

I asked Aleksandra what differences she finds between American and French desserts?  She said that American tastes favor more sugar, and “When a dessert is overly sweet, the first impression is, SWEET!­ But If you bake slightly less sweet, what actually comes forward are the other flavors, setting a more nuanced taste.”  She noted that, “if you bake simply and not excessively sweet your baking doesn’t have to be fussy, and you’ll find there’s less binging.”

Food is, of course, a key to unlocking memories. Proust had his madeleines. And Aleksandra Crapanzano gives us a glorious book filled with not only madeleines but all variety of fabulous and accessible Gâteaux. What a great way to take trip to France, no matter where you are! 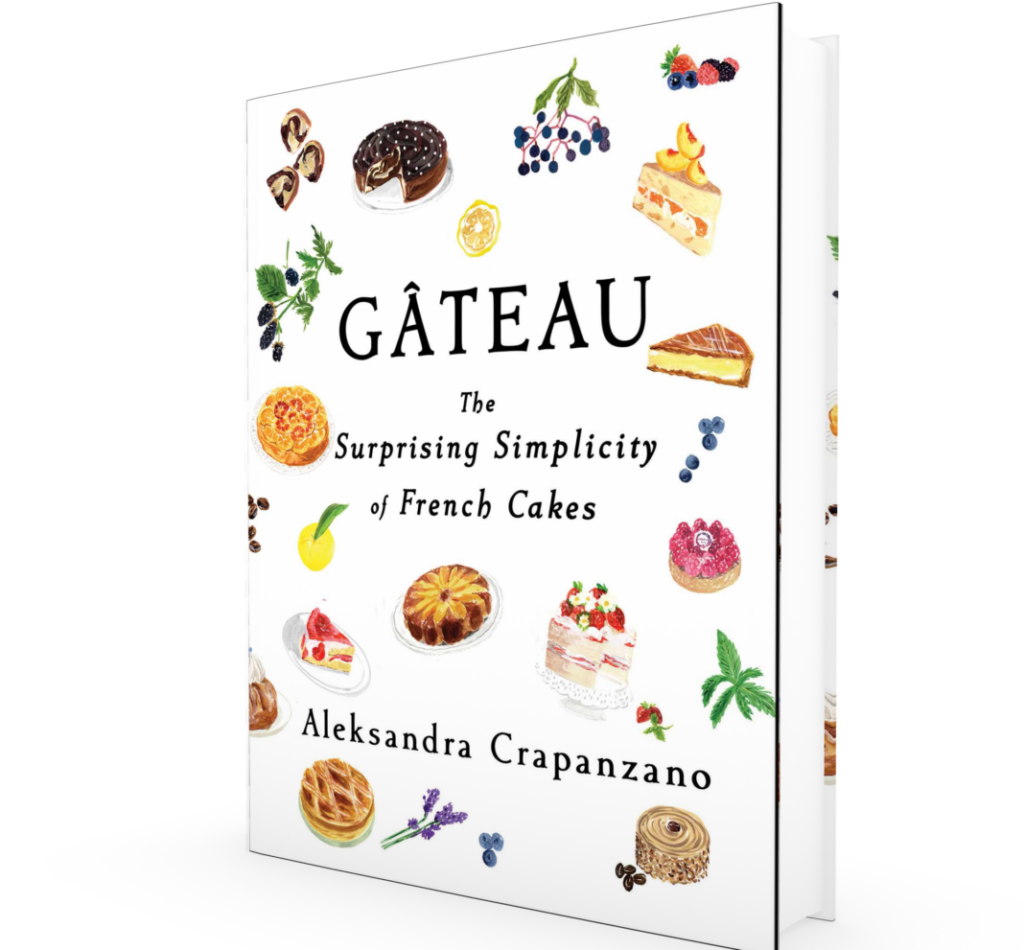 Some cake-y tips from Aleksandra Crapanzano:

Favorite café to write in: The upstairs room at  Café de Flor (off peak).

What flour does she use? King Arthur flour because it is readily available.

On ingredients: Use French butter because it has a higher fat content. Celebrate good ingredients that are in season.

Must haves on hand: Always have nuts and chocolate in the cupboard.

A Recipe from Gâteau: The Surprising Simplicity of French Cakes

Melt the butter over low heat and set aside to cool until warm but not hot.

Sift the flour, cocoa powder, baking powder and salt and whisk to combine. Set aside.

In a stand mixer or using handheld electric beaters, beat the almond paste and sugar until sandy in texture. One at a time, at medium speed, add the eggs. Increase the speed to high and whisk for a solid 10 minutes until the mixture forms pale ribbons in its wake. Decrease the speed to low and add the milk, Cointreau and vanilla and whisk until integrated. Add the dry ingredients and continue to whisk at low speed to fully integrate them.

Using a rubber spatula, fold in the chocolate and candied orange. Then, finally, the melted butter.

Pour the batter into the prepared pan and bake for 55–65 minutes. A knife inserted in the center should come out nearly, but not completely, clean. If it comes out wet with

chocolate, you may have simply hit a chunk or chip. In that case, test again rather than risk overbaking the cake. Allow to cool for 5 minutes, then unmold and allow to cool to room temperature.

If storing this cake overnight, wrap it well, once fully cooled to room temperature, in plastic. Leave it at room temperature and it will remain moist for 2 to 3 days, if kept wrapped. If freezing it, place the wrapped cake in a freezer bag and eat within a month or so.

Philip Ruskin is an External Lecturer (ESSEC Bus. School), Consultant (food & travel marketing), writer, drummer and regular contributor to Frenchly  He loves to bike around his adopted hometown of Paris. Find him here, on Instagram.