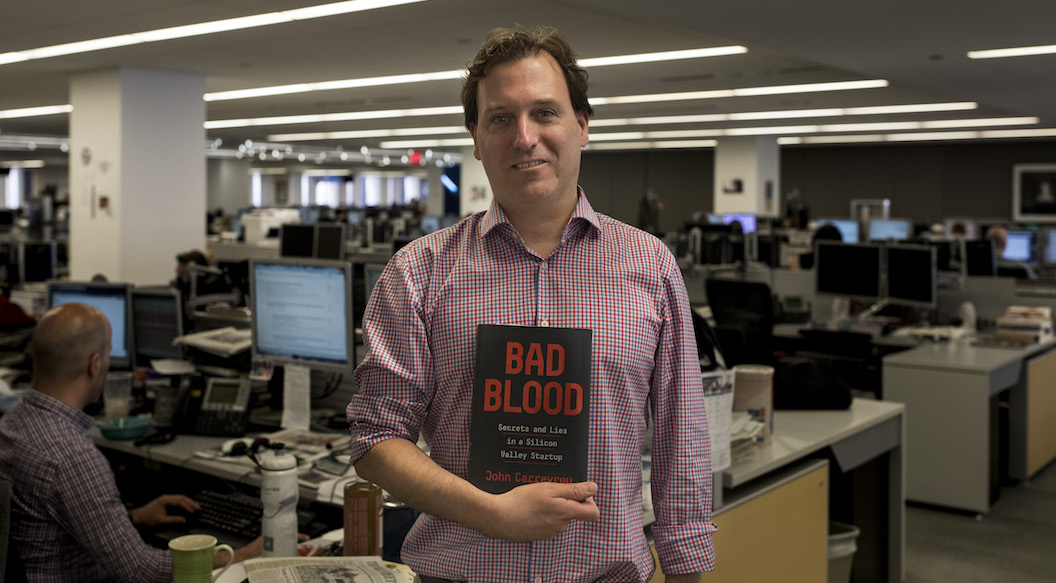 “Fuck you Carreyrou!” were the eloquent words sung like a war song by the employees of the California startup, Theranos, in October 2015. Their target? The French-American journalist Carreyou, whose scandal-exposing article was published by the Wall Street Journal two days earlier.

In his long article, the author revealed that the so-called revolutionary blood collection instrument marketed by the company was not working well and that the start-up was not using its own tools to carry out the tests, which it intentionally did not disclose to partners and investors. The scam, with its potentially dramatic effects on the health of users of Theranos products, was such that some American media reported it the biggest corporate fraud since the Enron scandal.

I was told about ‘Fuck you, Carreyrou’ a week later,” recalls John Carreyrou, sitting at his desk of News Corps the company that owns the Journal. “I thought it was ridiculous, but I didn’t think too much about it at the time because I was working on other articles on the case. This chant is emblematic of how Theranos works. They had committed fraud, but that didn’t prevent them from being arrogant and denigrating everyone.”

This story is just one of the many anecdotes in the investigative journalist’s new book, Bad Blood. At the heart of the story is the charismatic Elizabeth Holmes — the women who founded Theranos in 2003 at the age of 19. Her power of persuasion, as well as her product — a needleless instrument that allowed her to take her own blood tests and see the results — earned her the title of the youngest self-made billionaire.

She succeeded in convincing Walgreens to market her defective product, while recruiting big names such as former Secretaries of State Henry Kissinger and George Shultz, seduced by Holmes’ aplomb and vision, onto her board of directors. Touched by this success story, the media compared her to Steve Jobs, who also dropped out of college and favored secrecy and black turtlenecks. “Silicon Valley had never had a woman who was a self-made billionaire. There was a demand for this kind of figure,” elaborates Carreyrou to explain the media frenzy.

When he began his investigation in 2014, he admitted that he was not one of Holmes’ groupies. “I read a portrait of her in The New Yorker. It seemed strange to me that a 19-year-old girl without medical training could invent a blood-testing technology. A few weeks later, I got a tip from a source, which caused me to start doing my research.”

The investigation lasted nine months. With help from former employees of the company, he managed to shed light on the executives’ schemes to deceive investors, customers, and the media. He also revealed the terror that Holmes and her right-hand man, “Sunny,” caused in the company by constantly surveilling employees and dismissing any criticism.

“As I progressed in the investigation, I realized that this could be a book,” confides Carreyrou.

As if the fraud alone wasn’t bad enough, he also recounts the pressure exerted by the company and its lawyer, the fearsome David Boies, to prevent publication of the article and to intimidate the journalist’s sources. Some of these sources were even put under surveillance by Theranos. Elizabeth Holmes went so far as to ask Rupert Murdoch, owner of the Wall Street Journal and investor in Theranos, to intervene directly.

“There were stressful moments,” admitted the French-American journalist. “The Wall Street Journal is in the habit of giving those who are the subject of an article lots of time to respond. In this case, they took advantage of that to threaten me and my sources. I was afraid that they would be able to pressure my sources until they broke down, and that the investigation would collapse.”

As the son of Gérard Carreyrou, star-journalist for Europe 1, John Carreyrou is no rookie. In 2015, he received a Pulitzer Prize for leading a series of investigations into Medicare. “I’ve always wanted to do long-term investigations. When I graduated from Duke, where I studied journalism, I wanted to work for a magazine. But I couldn’t find anything. They hired more experienced journalists,” he says with a smile.

Theranos was by far the most difficult investigation of his career. “I had never met such mad resistance, with threats by the most famous lawyer in the country, sources under surveillance… During it, I thought: this case is a movie.”

Because of the pressure and threats of prosecution he received from Theranos, he approached publishing houses discreetly — no more than five, he said — to avoid stirring up tensions. “Bad Blood” is his first book. And for a first, it’s a success. It’s on The New York Times’ bestsellers list and will soon be adapted into a film. The screenplay will be written by Vanessa Taylor, co-writer of Shape of Water, and Elizabeth Holmes will be played by Jennifer Lawrence. Carreyrou knows nothing about the content of the film at the moment. “Shooting should start next year,” he says.

He hopes that Bad Blood will help to put some safeguards on Silicon Valley and its most voracious contractors. “In the United States, we often make the link between success and money. As these founders of start-ups are among the richest people in the world, they are the object of adulation. This capitalist side of American society will probably never disappear — we have a billionaire president after all. But I think my investigation has helped to nuance the vision we have of Silicon Valley.”