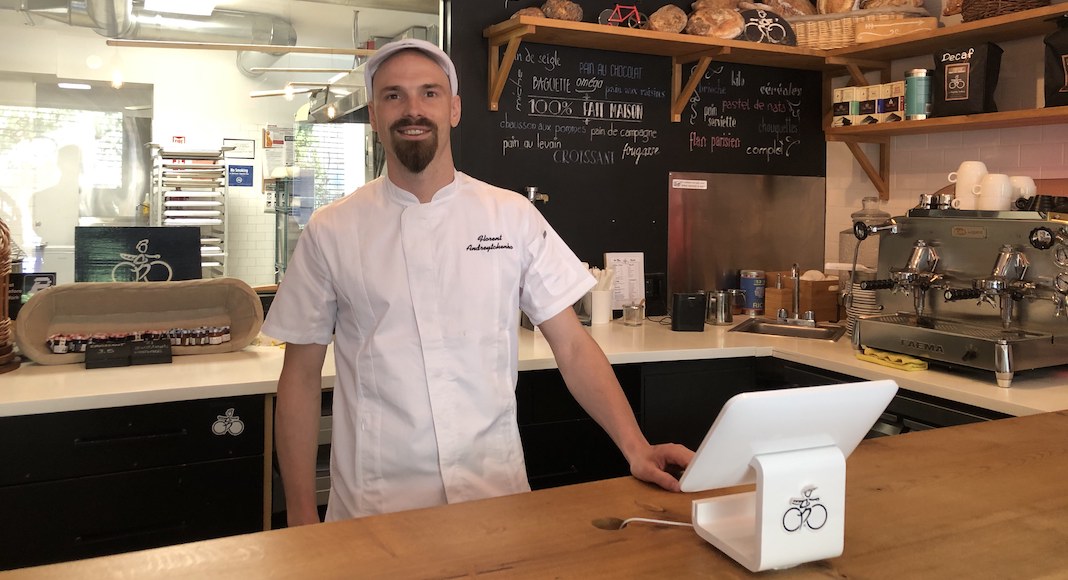 You have to be patient to get a chance to taste the delicious organic baguettes at La Bicyclette Bakery. On Saturday mornings, the line goes around the block from 667 Driggs Avenue in Williamsburg. “I’m fortunate to have been able to stay open during the outbreak and to have a very loyal clientele,” says Florent Andreytchenko with a smile on his lips.

A true bakery purist, the 31-year-old from Champagne fell in love with baking at the age of six during a school trip. “The good smells, the atmosphere, I knew right away that’s what I wanted to do.” At the age of eleven, the young boy was trained by a baker, a friend of his father’s, in the small village of Étoges in the Marne, before starting a pre-apprenticeship at the age of 13 at the Chambre des métiers de Laon in the Hauts-de-France. “I learned traditional artisanal baking, in which the quality of the ingredients and the development of savoir-faire count.” At the age of 18, Florent Andreytchenko landed his first permanent contract, but the call from abroad was strong. He left his job two years later for Australia and Brisbane, where he worked for Savico Basset Rouge, a baker from Mauritius trained in France at Fauchon. “I am very proud to say that he is my mentor. He pushed me to the limit by promising me that I would be able to work anywhere in the world after training with him. He was right.”

Florent Andreytchenko has a second passion, geography. He explains that he has “always connected travel and work.” So it was only natural for him to leave his job in Brisbane in 2011 for New Zealand, and then Norway. He then worked successively in Corsica, Croatia, Morocco, and Hong Kong, until he left for New York in December 2018. “I’ve been to eight countries in eight years. I wanted to travel but also to learn from each country and each bakery. I worked with all kinds of people, I had to make do with all kinds of equipment and raw materials. That makes me what I am today, a “MacGyver” of the bakery.

Florent Andreytchenko fell in love with the United States during a trip to the West Coast in 2018. He first hoped to set up a project in Seattle, but changed his mind after discovering what the weather in the city was like. “300 rainy days a year, no thanks,” he jokes. New York then became the obvious choice, as the headquarters of his partner Joana’s company is in Manhattan. “I spent six months roaming the streets of New York looking for something affordable. I finally found the perfect place in Williamsburg, in a neighborhood where there is already a lot of local craftsmanship, and few chains.”

At La Bicyclette Bakery, Florent Andreytchenko has two obsessions: quality and price. He serves a menu of French classics including croissants, pain au chocolats, pain au raisin, and savoury products such as quiche lorraine and a ham and swiss cheese sandwich. “There’s no way I’m going to see frozen products in my store. Here, every product goes through my hands,” explains the young baker, who offers his organic baguette at the unbeatable price of $2. “It bothers me to see it elsewhere at $4 or $5. The baguette isn’t a luxury product, it’s the basis of the bakery. It must be accessible to the greatest number of people.”

Don’t expect to find French flags at Bicyclette Bakery, or to see the bakery on the front page of the papers, Florent Andreytchenko is not in the marketing business. “I want to work quietly. My store is my product. I only rely on word-of-mouth.” A logic that pays off, given the number of visitors to the place, while the boss is still not allowed to welcome customers on site. “I’m only open on Tuesdays, Thursdays, and Saturdays, from 8am to 3pm at the moment. I hope to be open six days a week starting June 22.” (Editor’s note: June 22 is the anticipated start date of Phase 2 reopening in New York.)

Living happily in New York despite recent events, Florent Andreytchenko has just had his first child in February. His medium-term objective is to “stabilize” his bakery. He is not against the idea of opening a second location afterwards and developing in other American cities, on one condition: “I want my teams to share the same philosophy as me.”