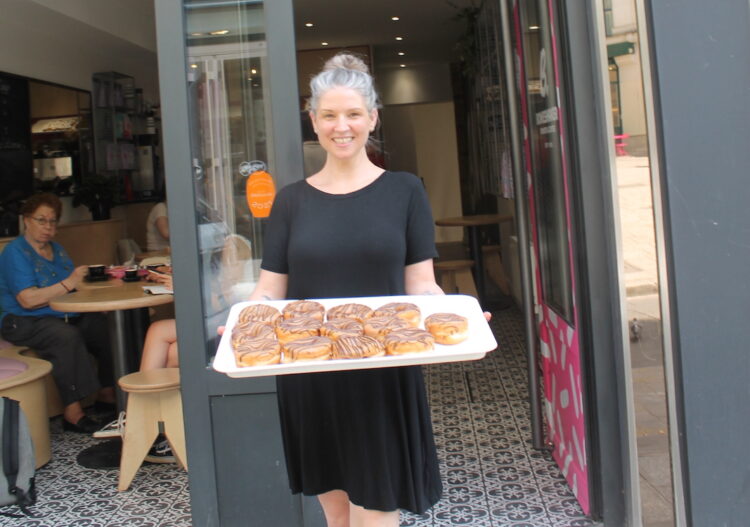 The donut, one of the most iconic of American foods (often associated with fall apple orchards and cops in cruisers) is a far cry from its upscale French cousins, the beignet or the celebrated croissant. But Amanda Bankert, an American pastry chef living in Paris has changed all that. Every day there is a line down the block in front of her donut shop, called Boneshaker, full of smiling Parisians eagerly awaiting fresh donuts. Donuts!? Smiling!? In Paris? I had to meet this woman and find out how and…why. 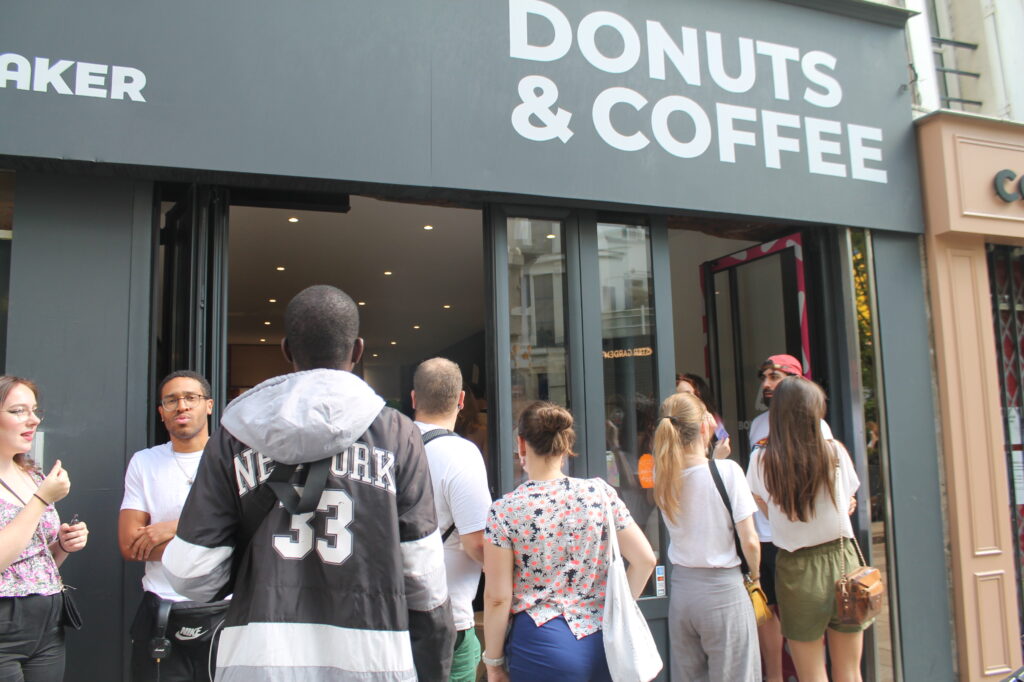 I sat down with Amanda at her newly relocated, larger, and perennially popular Boneshaker Donut shop in the hip second arrondissement to chat over a cup of Joe and donuts. Amanda has a radiant smile and an unflinching can-do exuberance that is infectious. Giddily, I asked her how she ended up in Paris, while I dug into a generously sized “Baby Got Back” (peanut butter and dark chocolate) donut and slurped my coffee with childlike glee.

Amanda proceeded to tell me how she came to Paris for a year abroad as an art history student while a junior at Sarah Lawrence College. She ended up extending the 6 month term to a full year. Then, as soon as she returned to the U.S., she started thinking about ways to she could realistically get back to Paris and have a career­­. “I’d worked in restaurants since I was fifteen and all through college, so I thought maybe I could do something with food rather than art history. I’d go the restaurant path instead, I figured.”

Just days after graduating, she was on a plane back to Paris where she enrolled in the world-famous Le Cordon-Bleu culinary school to study pastry arts.  She recalls how, “after graduating from the Cordon Bleu I went to work as a pastry chef in Dublin, and I stayed there almost ten years working in a lot of high-end restaurants.”

In 2012, after those years in Dublin, she moved back to Paris, now married. “I’d always worked for other people, but the ultimate goal was to open something of my own. I didn’t want to open a shop making French pastry in Paris, that niche has been pretty much filled,” she told me with an ironic laugh. 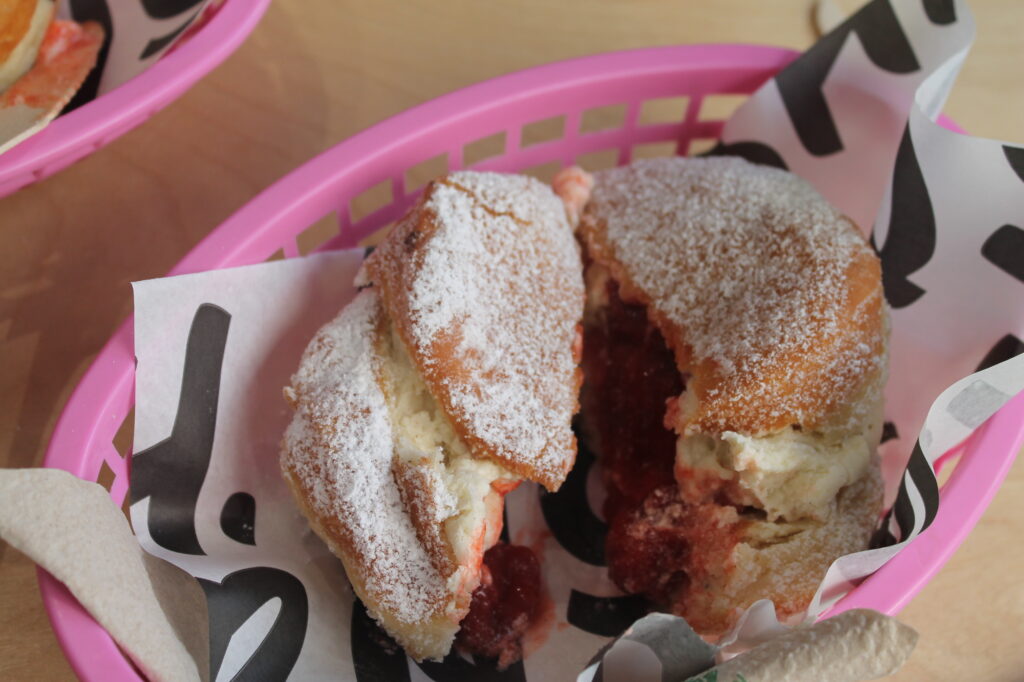 But how did she go from high-end plated desserts to American donuts?  “Well, it was kind of an accident,” she explained. “I was visiting my family on the Jersey Shore, and we went to Marvel Bakery for donuts, a family tradition every summer. So, we were having donuts, and as I was biting into it and having this orgasmic moment. Then, I thought, ‘Gosh I wish I could get these in Paris’ And then I thought, ‘Well, I could…if I made them.’ At that time there was nobody doing donuts at all in Paris. You could, obviously, get beignets at a boulangerie, but they aren’t the same thing. So I thought, ok, I could make it as fancy or ordinary as I want it to be. The donut is a perfect starting point.”

As Amanda was telling me her story, I had moved on to a second donut and more coffee. I was hungrily devouring a vanilla buttercream and strawberry compote filled “Victoria Sponge” donut. Excitedly, I yelped, “These are amazingly delicious! How did you come up with these recipes?” 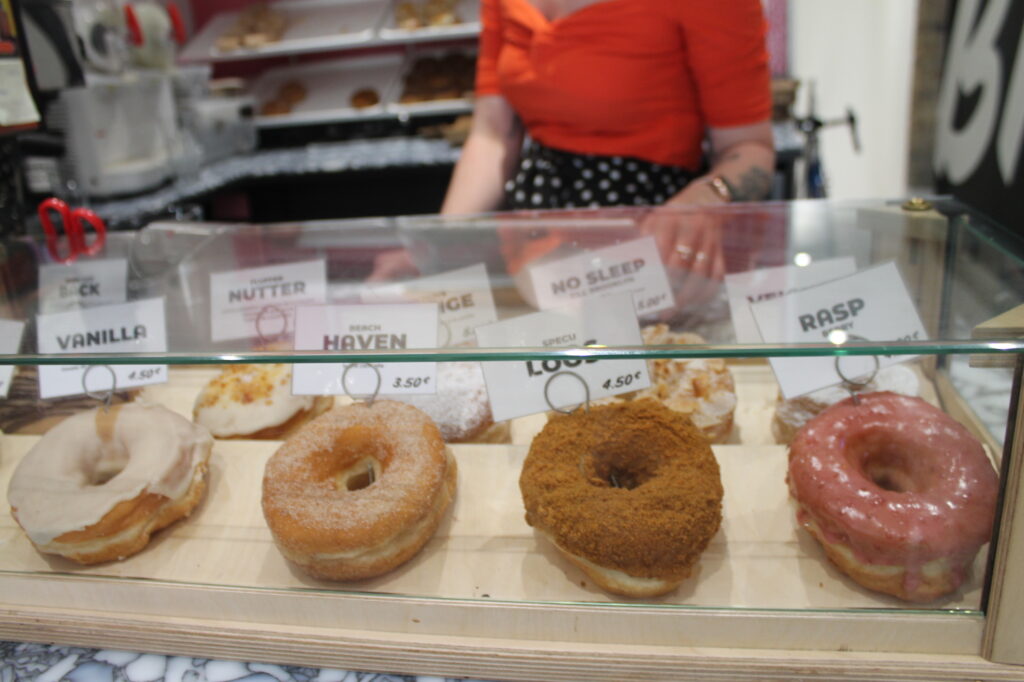 “The year after we resettled [from Ireland], I was working part time at La Comptoir de la Gastronomie. I was  seven months pregnant, and when my son was born, I devoted all of my spare time to developing a really good donut recipe. I kind of took a mix of bread and brioche and played around with it until I had a recipe that I was really happy with. Having worked as a pastry chef in restaurants it wasn’t a huge leap, I had the basics.”

Amanda pointed out that American donuts have a bad reputation as being industrial, fast food. There were a lot of doubters, and, in fact, at first those doubts were a challenge. All of the banks she approached refused her business loan, telling her that, “donuts are never going to work here in Paris,” she said. She was not only introducing a new product to the market, but also had to change people’s perceptions. So, how did she do it?

“I hadn’t worked in a bakery, so I’d never done things on a big scale and I was unfamiliar with professional donut making equipment. So, I was using a small home fryer making three donuts at a time. When we opened in 2015 [in the original space], it was just me in the kitchen. I was learning as I was doing; it was like baptism by fire. But it worked because they were really home-made a la minute, and people loved that. It became a real selling point: People were getting fresh, fresh donuts, and as they were waiting outside they could see a chef in the kitchen upstairs with flour flying everywhere,” she says with a laugh.

Thanks to Amanda, donuts are now seen as a really cool and exotic American product. Having opened the first American donut shop in Paris, more have followed since. “There’s room for everybody,” she says, again displaying her generous and warm spirit.

And what about the name, “Boneshaker?” It’s the nick-name for the first pedaled bicycles, which appealed to Amanda because she is an avid cyclist with a sense of nostalgia, fun and whimsy.

As we were winding down our chat, I asked what projects Amanda had on the horizon? She told me about a vegan cookbook she just completed that will be released (in the U.S.) in the summer of 2023, as she’s become vegan, a change which has now come to her donuts: while she always had vegan options, now all of her donuts are 100% vegan.  She weaned her recipes off of butter so expertly and thoughtfully that no one could tell, she told me. Over the course of a year, she reworked the recipes, one donut at a time, and wouldn’t trade out the original one until the customers couldn’t tell the difference. The quality, taste, long lines, and broad smiles all remained.

“What I love is that pastry is purely pleasurable, it’s decadent, and it brings joy, which are all things that appeal to my sensibilities,” she told me smiling. After a pause, as we finished the last of our donuts, she added, “my job as a pastry chef is to bring a little bit of happiness to somebody’s day. And that remains true as a donut shop owner in Paris.”  When in Paris, let Amanda Bankert, a true sorceress of sweets, cast her spell on you, one vegan donut at a time.

Philip Ruskin is an External Lecturer (ESSEC Bus. School), Consultant (food & travel marketing), writer, drummer and regular contributor to Frenchly  He loves to bike around his adopted hometown of Paris. Find him here, on Instagram.

All photos taken by the author.

Other American foods are trending in Paris, she says.

“Pancakes are killing it,” she says. Her favorite is HolyBelly, where they “do amazing pancakes.”

Restaurant: Juveniles. “If you have one dinner in Paris.”