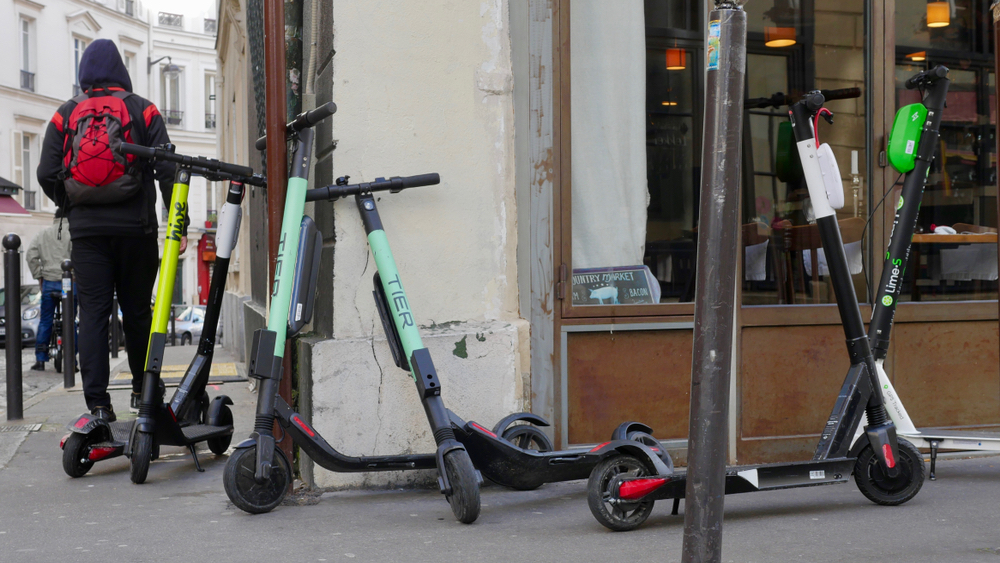 Electric Scooter Invasion: How It Got Out of Control in Paris

Last weekend, a small but significant exchange took place on Twitter. A video relayed by a cyclist shows thirteen scooters from the Lime electric scooter company, at the entrance to the Tuileries tunnel in Paris, being recharged with a loud and smelly generator. Two days earlier, at the same place, another cyclist had already filmed the same operation, protesting (in vain) against the danger of using such a machine in a tunnel.

On Saturday, April 27, the tweet, however, caught the attention of the first deputy to the city Emmanuel Grégoire: he called on Lime to demands that this situation be put to an end.

It was a formal notice that almost immediately attracted a response from Lime, who responded with outrage as well. The individual was identified and “suspended.”

End of story? Hardly. The exchange shed light on the way in which these free floating, i.e., without any fixed docking point (like CitiBike) electric machines are recharged each morning so that any individual subscribing to the service can use one and then leave it wherever they want. An army of rechargers called “juicers” pick the scooters up and plug them into an outlet via chargers provided by the operators. For most operators, all someone needs is a Siret number (a designated code representing a business) to become a juicer: in a word, these people are self-employed.

Paris has no fewer than 10 self-service scooter operators. The city estimates that “more than 15,000” of these devices. The first company, Lime, arrived less than a year ago. It’s hard to get a more accurate number. Lime didn’t answer our (Le Point’s) questions, neither did Bird. Bolt replied evasively that they had “a few hundred electric scooters” in the capital and that there would be “between 1,500 and 2,000 by the summer.” But this company, unlike Lime, told us that it refused to use self-employed juicers, preferring to use “an internal team and trusted long-term service providers,” or, more precisely, “a logistics company that has its own employees … and whose mission is to distribute scooters in the morning and collect them in the evening as well as to provide maintenance.”

The life of a juicer is no easy task. It’s necessary, via the app, to locate the scooters. The harder it is to access them — a difficulty estimated by the application according to a color code system — the more the juicer gets paid. Many juicers choose to hunt down “moderately” difficult to spot scooters. But it’s not uncommon for the scooter to have already been picked up by the growing number of competitors when they arrive. The pay? On average 5 euros per machine. On one condition, that they be put back in place before 7 a.m. the next day, in “pockets” indicated by the app and that before leaving it, the juicer has sent a photo of the scooters. Objective: to prevent them from being put anywhere.

Wheel O’Juicer, as he calls himself on Twitter, is one of those people looking for extra income. Six months ago, this maintenance technician became a juicer for Lime, Bird and recently Voi. In this activity, he’s an amateur: the app shows him the machines available for charging in his neighborhood. He goes to get them on a Segway. He picks up two or four at a time at most and takes them home, one or two in each hand. During the day, on average, he collects about 10 scooters (the application has limited juicers to doing 25 scooters per day). He returns them around 4 a.m. and earns, on average, about fifty euros a day.

This extra job pleases this 30-year-old who has another job and is “lucky to be okay with five hours of sleep per night.” It’s quite “fun”, he says, but not without some difficulties: in particular the bugs in the app. Sometimes it indicates a pocket of scooters which are in reality inaccessible, or it doesn’t accept the deposit of the machines and refuses to unlock another pocket of scooters.

Wheel O’Juicer also noted the total irregularity of work (sometimes there are tons of scooters needing recharging, sometimes, like in early May, scooters needing recharging are inexplicably rare) and the rise in competition. There are “pros” in vans, who seem to work with several people, even if this isn’t normally allowed, and have the ability to recharge up to 100 scooters. He also points out that his traditional method of action does not allow him to recharge Voi scooters, whose wheels can only be unlocked by users. The operator, he concludes, disappointed, seems to only want juicers who use Voi. In short, if recharging scooters were his only job, Wheel O’Juicer would be “super stressed.”

In fact, other juicers seem much more organized. Take these photos, taken by an Internet user, which show many scooters laid out on the voie Georges-Pompidou, seemingly guarded by a group of young people working for one older person to collect as many electric machines as possible.

On Twitter, elected officials in Paris are regularly tweeted at by angry scooter users. Their answer: they did everything they could. Clearly, Paris would not have had the ability, as the legislation currently stands, to oppose the invasion of electric scooters. Like other local elected representatives, they call for the urgent adoption of the loi d’orientation sur les mobilités (guiding laws on transport), known as the LOM law. Article 18 provides for the possibility of subjecting self-service vehicle sharing services to a specific preauthorization procedure, a provision that has been further strengthened by senators. The text is due to be definitively adopted in July, if parliamentary procedure doesn’t delay it.

In the meantime, Paris has recently and urgently imposed a fee on operators that varies according to the number of vehicles in a public space. “Those with less than 500 scooters will pay 50 euros per machine each year,” explained Paris City Hall in Le Figaro. “The fee increases up to 65 euros per scooter per year for those who operate more than 3,000 scooters.”

For safety, the city began making changes recently as well. At the end of March, Paris Mayor Anne Hidalgo announced a city-wide fine of up to €135 for the same act. Just days after the ban was announced, police were already handing out tickets. The Minister of Transport announced a similar planned ban affecting all of France in early May.

The City is also preparing, on 13 May, to make public the charter currently under negotiation with operators. It also increased penalties against users who drive at full speed on the sidewalk (a fine of 135 euros) and those who park them in the middle of pedestrian areas or even simply at the edge when there is a two-wheel parking area nearby (a fine of 35 euros). To avoid backlash from cyclists, who see cohabitation as a problem, the city promises to create spaces dedicated to scooters, to accommodate 2,500 machines.

To be honest, it seems that Paris City Hall is totally overwhelmed by the phenomenon. It soon expects some 40,000 scooters to be on the streets. In July 2018, the city issued a press release welcoming the arrival of this additional alternative to cars and internal combustion engines, its real pet peeve. At the time, anything seemed acceptable if it was promoting other means of transportation. But the City seems to have recently realized the anarchy in progress and is shifting accountability to the legislature.

However, according to two business lawyers, Olivier Bégué and Stéphanie Legrand, it’s not that simple. While acknowledging “the lack of doctrinal consensus and the difficulties in interpreting the current legal framework,” they think cities aren’t that helpless. “If we consider that the use of self-service vehicles for rental/sharing in the public domain exceeds the limits of the right of use, which belongs to all and constitutes an economic activity, the General Code of Public Ownership (CGPPP) stipulates that operators must have a permit,” they wrote to us in response to our questions, adding that “the issuing of this permit should take place following a voluntary demonstration of interest by operators.” In other words, cities have the means to organize the deployment of scooters earlier in the process and shouldn’t give into the what’s-done-is-done strategy of operators.

In their view, municipalities had two options: either to refuse to issue permits “as long as such refusal was justified by considerations of general interest, for example, to preserve the safety of pedestrians in the face of unauthorized parking of the vehicles concerned, in proportion to the objective pursued and not seriously illegally imposing on the freedom to do business”; or to accept and, taking into account the number of possible operators, set up a selection procedure.

This is what happened in Strasbourg. The city first gave permission to the Knot company, which offers scooters that have to be dropped off at a docking station where they are recharged (like CitiBike or electric Vélibs). In terms of electric vehicles, free floating appears to be the worst approach, requiring you to find the vehicles every day. For scooters without a docking station, Strasbourg then published a “call to private initiatives”: in other words, a call for operators, giving the city the ability to only choose the operators who met its requirements.

Jean-Baptiste Gernet, deputy mayor in charge of alternative mobility, said on the telephone, like the Parisian elected representatives, that the situation would be clarified in the LOM law. However, he notes that no operator has contested the Strasbourg approach. He also readily acknowledges that the city’s prudence was inspired by the desire to avoid chaos like in Paris. “I’m not going to oppose an alternative mode of travel,” he concludes, “but I’m not sure how this means of travel is sustainable, beyond the trendy aspect, not to mention that we would prefer to favor active, and therefore healthy, modes of travel, such as walking or cycling.”

This article was originally written by Marie-Sandrine Sgherri in French and published on Le Point.