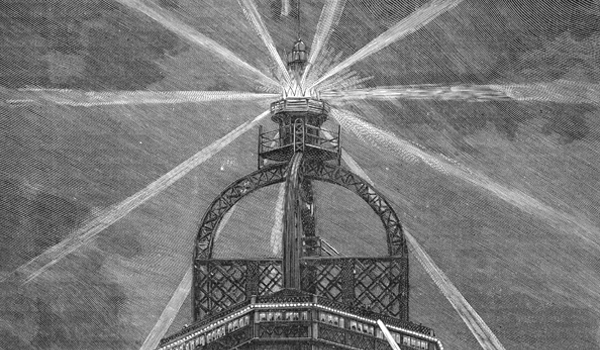 Le Figaro has plucked from its archives the story of competing designs for the 1889 World’s Fair in Paris, when Gustave Eiffel had competition from fellow architect Jules Bourdais.

Bourdais, who had designed the Old Trocadéro Palace, had a vision of a 300-meter tall stone tower with a 55-meter lighting assembly on top—which would have out-stripped the Eiffel Tower by 55 meters and become the tallest work of masonry in the world, more than doubling the height of the Washington Monument in D.C..

In an article from the January 7th, 1885 issue of Le Figaro titled “Reestablishing the Towers of Babel,” author Pierre Giffard addressed Eiffel’s designs, saying, “It can be said of the project, if it’s realized, it will realize the apotheosis of the locksmith.”

But he said that Bourdais’s design—of a Tower Of Pisa-like structure, adorned with what was being called a “sun lantern” and a “pseudo-moon”—was just as amazing as Eiffel’s tower.

Paris had become the first European city to adopt gas lamps for street lighting, and Bourdais and his partner, an engineer named Sébillot, intended make it a true City Of Light by using the lantern to strike strategically placed parabolic mirrors, illuminating places still left in effective darkness decades after the introduction of the lamps with the lantern’s reflected light.

Bourdais was convinced that such a huge structure could support itself, even when made out of heavy granite—his design incorporated a foundation big enough to keep the tower standing and house a museum of electricity—but the judges of the competition doubted his math.

Besides a musée de l’électricité and pseudo-lune, the tower was designed to have four elevators that would take visitors up to the top for “aerotherapeutic” cures.