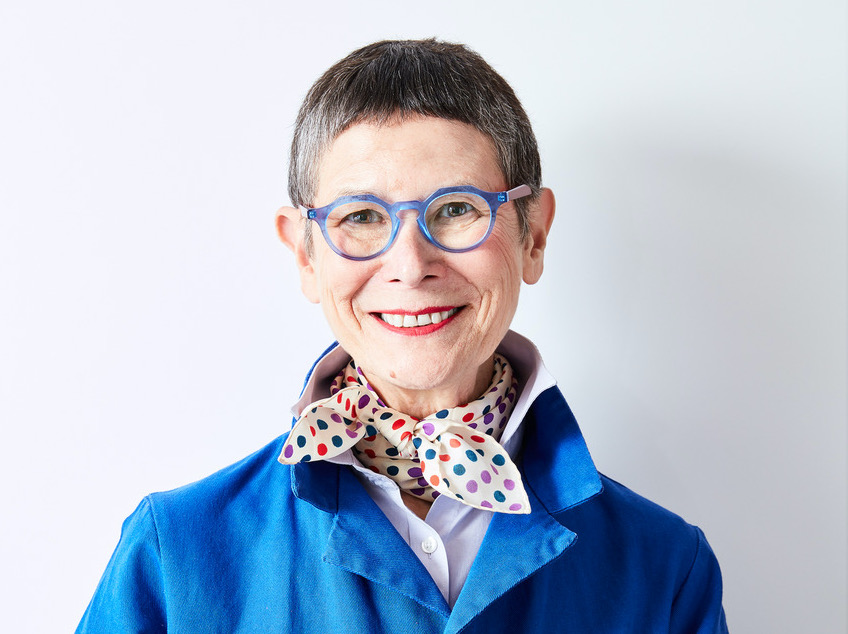 Best-selling cook-book author, food writer, and blogger, Dorie Greenspan, had to get back to the US from Paris, where she lives part of the year. She needed to go promote the  release of her latest cookbook, Baking with Dorie: Sweet, Salty & Simple. Since we couldn’t meet at Les Deux Magots for coffee, we settled for a transatlantic call. 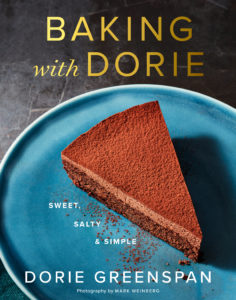 “There is French inspiration in all of my work, France touched me from the start,” she confides.  “I fell in love with the city and had a feeling of belonging here. And I never felt that way about another city, a physical reaction.” Greenspan’s love-affair with France is reciprocal. Last year she was awarded the Ordre du Mérite Agricole, one of the country’s highest accolades, for her role in raising the awareness of French gastronomy and ingredients globally.

As she playfully puts it, “My mother had me in Brooklyn, and I always thought it was a mistake. I should have been born in Paris.” This summer she returned to Paris after her longest stretch away (five hundred days) due to the pandemic. “I missed it so much, Paris is such an inspiration to me for a million reasons.”  What she missed the most, she tells me, are her friends here. “I thought I would cry when I landed, or when I saw the Eiffel Tower. But it was every time I saw a friend that I cried. I really missed my friends.”  (She confessed that the first week back home in Paris she went around with a handkerchief everywhere.)

For the past twenty-three-plus years, Greenspan’s Paris home has always been in the 6th arrondissement where she continues to frequent her favorite neighborhood markets and shops and is on a first name basis with the vendors. She points out that “it takes forever to run a short errand because I stop to chat with all of my vendor friends.” She tells me about when, after being away quite a while following 9/11, a vendor friend (Michelle) spotted her at the end of the line down the street, and then came up to her and started to cry, “I was so worried about you.” While many Paris arrondissements are known for feeling like “a village,” Greenspan reminded me that in her Saint Germain quartier there’s actually a name for the inhabitants, “germanopratins.”

Greenspan explained that she “gets a tingly feeling when something is a bonne idée and I know it.”  With well over a baker’s dozen books and countless articles that have influenced several generations of baking and cooking enthusiasts, it was another very bonne idée that gave rise to her latest tasty tome, Baking With Dorie. The “aha” moment for the book was triggered by a Cheddar Scallion Scone she tasted in Santa Barbara. She was so taken with it that she posted it on Instagram to share with her one-hundred-and-nineteen-thousand followers. Right away, fellow cookbook writer and friend, Anne Mah, messaged Greenspan and said, “You need to write a savory baking book.”  And so, the idea for Baking with Dorie was germinated, and evolved to also include a sweet side. It has quickly made the New York Times best seller list.

It’s hard to imagine that this rock star of recipes wasn’t always a food writer. She started cooking and baking as a married student in college, after which, she began a career working at a Social Research center writing grant reports. Dorie kept cooking at home, constantly trying new recipes. She decided to go back to school to get a graduate degree in Gerontology. But it was her husband, Michael, who suggested that she start baking since she loved it so much. So she took a job working at a bakery in New York City. That is, until the day she made a creative change to their signature “Simca Beck’s Gateau Doris,” using Armagnac-soaked prunes and pecans instead of whiskey-soaked raisins and almonds.

She was promptly fired for “creative insubordination.” A friend soon pointed out that since she cooks, bakes and writes (albeit grant reports at that point), why not combine them all?  So she did.  And by Christmas of 1983, Food & Wine had asked her to write a story she called “Fireside Sweets,” about small pastries, bonbons and treats.

And she hasn’t stopped since, contributing regularly to many of the nation’s (and world’s) leading media outlets. Now Greenspan is a multiple James Beard Award winner (and “Who’s Who” inductee) and her books are home library staples. She has the rare ability to truly connect with people through her writing, bringing them into her home, and her into theirs. Some of her titles tell it all: Baking from My Home to Yours(1980), Around my French Table (2010), Baking Chez Moi(2014). “I was very lucky, and I kept saying ‘yes’ to things,” she tells me.

Greenspan has encouraged countless home cooks and bakers to be “creatively insubordinate,” and, in essence, to experiment, create, and follow their passions. On the sites dedicated to her recipes, like French Fridays with Dorie (whose members  bake through her cookbooks and share tips) and in feedback on her own site, people tend to get really creative, even tweaking her recipes. “It’s always fun to see what people do,” she told me.

While “Baking with Dorie” isn’t one of her France themed books (like, At My French Table or From my Paris Home, to Your Home Anywhere), much of the inspiration for her that goes into creating a book happens in Paris. She told me that, “I make it in Paris first.” 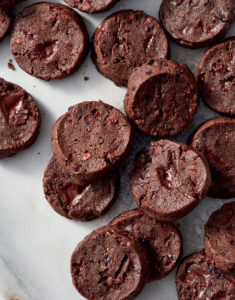 Her famous signature World Peace Cookie was originally created at the Paris restaurant Korova by the celebrated French pastry chef Pierre Hermé (with whom Dorie has collaborated on two books.) Greenspan’s version became an instant hit when it appeared as “The World Peace Cookie” in her book, Baking From My Home To Yours. It was just delicious as it was, and so she never changed it. That is, until she was asked to make a new version for her friend and fellow food writer Charlotte Druckman’s own book, Women on Food. Dorie looked for qualities that she admired in women to inspire the World Peace Cookie 2.0, like Cayenne pepper, representing their strong, vibrant, sassy side.

Baking with Dorie is a perfect balance of savory and sweet and includes her signature “Playing Around” and “What If” sections (these are called “Bonne Idée” in her France-based books) where she gives recipes a playful make-it-your-own twist. For example, she took a classic Cream Puffs recipe, and turned it into Japanese Pokey Sticks. In addition to inspiring people to innovate, Greenspan’s mission seems to include enabling contentment and connection…and fun.

“There are lots of bakeries, especially in Paris, so there’s no reason to bake except to have pleasure,” she points out. “I want people to enjoy the process of making, sharing, eating, and watching.” I can picture her winning smile as she says, with child-like glee, “It’s magical that you can find these ingredients and make something with your hands and share it. Enjoy the time that it takes.”  I would offer the same sentiments about Greenspan and her books: They are simply magical. So, take the time, enjoy them and bon appétit.

Philip Ruskin is an External Lecturer (ESSEC Bus. School), Consultant (food & travel marketing), writer and drummer. He loves to bike around his adopted hometown of Paris. On Instagram