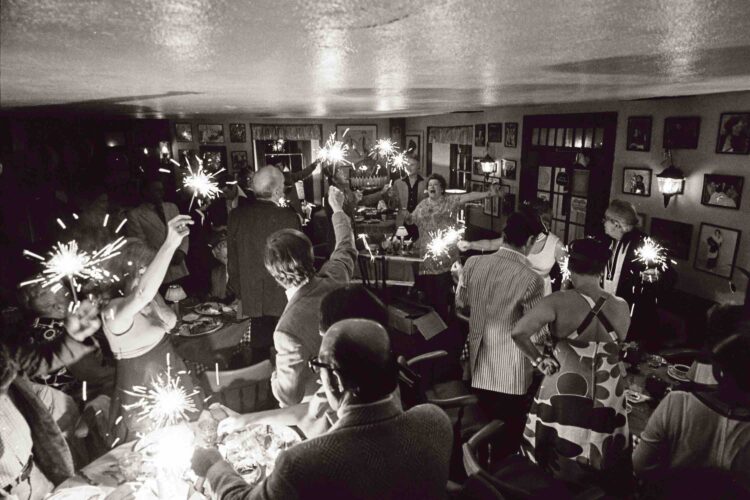 Cinematic history can be pretty cruel to its main characters, sometimes leaving them in the shadows of New Hope, Pennsylvania. I wondered why I had never heard of French-born American actress Odette Myrtil, but it seems that women like her often fall through the cracks. And yet she left a legend like no other: “Chez Odette,” New Hope’s most famous cabaret bar where the actress loved to cook in the traditional French bistro kitchen. Today River House at Odette’s, a luxury boutique lifestyle hotel, is paying homage to the spirit of the actress.  They kicked off celebrations on March 8th to coincide with International Women’s Day, with a grassroots, museum-style exhibition, Odette Myrtil: Honoring a New Hope Legend.

Odette Myrtil was born in Paris in 1898 as the daughter of two stage actors and showbiz was her destiny. By 13, she was a professional violin player; by 16, she was acting on Broadway as one of the Ziegfeld Girls, and by 18, she was onstage in London in The Bing Boys Are Here . The young actress, singer and musician was unstoppable. At first, she continued appearing on London’s stages for the next couple of years until she returned to New York City in 1923 as a vaudeville entertainer at the Palace Theatre on Broadway. She was a major Broadway success through the ’20s and the ’30s as she headlined some of the best musicals, including The Cat and the Fiddle.

Thriving on the stage until 1935, Myrtil’s career then shifted towards film. She went on to appear in a total of 28 feature films, but never as a leading lady. Instead, she specialized in roles requiring singing and other talents. She starred in well-known films, including Yankee Doodle Dandy (1942), The Palm Beach Story (1942), and Madame Darville in Alfred Hitchcock‘s Strangers on a Train (1951.) Her final role was in Hot Pants Holiday, playing herself in 1972.

The actress is an early example of a French expat succeeding in New York City and going on to make her mark on American culture. Eventually, she moved out of the city to the suburbs in New Hope, Pennsylvania, and into a house perched directly above the Delaware River. She managed The Playhouse Inn in this town, located next door to the Bucks County Playhouse, and then operated her New Hope restaurant, Chez Odette.  Here she was a true legend.

“Odette Myrtil symbolized New Hope of the 1950s, 1960s, and 1970s. She was so popular, citizens in 1965 campaigned to elect her mayor. The state Liquor Control Board put an end to it; no one owning a liquor license could be mayor,” writes a Courrier Times columnist recalling his visits to Chez Odette. “As often as possible, she joined customers in her lively cabaret and piano bar where she sang and played her vintage French Boirin violin.”

The Chez Odette period spawned a creative generation in New Hope known after that as an eclectic art community teeming with sculptors, painters, and writers. Today this community is still chic and artistic, with a contemporary flair.  Indeed the River House Hotel at Odette’s is outfitted in edgy-yet-elegant urban-inspired design elements seamlessly married with flowing fabrics, bold fixtures, and reclaimed architectural features for an unparalleled riverfront experience. Not precisely French bistro-style, yet the charm and the sweet nostalgia persists, and the Grande Dame of New Hope’s legacy carries on.

In honor of Women’s History Month, the hotel will be showing an exhibit dedicated to the life and the career of the great actress Odette Myrtil. The hotel will also be screening Odette’s films each Monday in March, accompanied by a special menu as a nod to the original Chez Odette culinary program. Looking for a venture out of town? Consider a staycation at the River House, where the lovely lounge and the river sounds of Delaware will lull you into a sweet getaway.