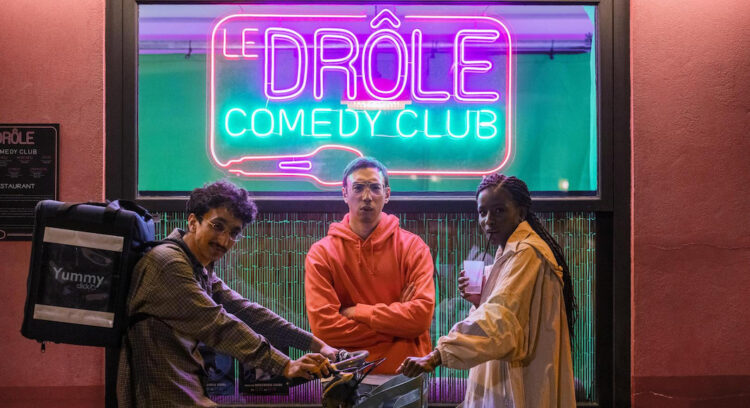 Creator of ‘Call My Agent!’ Has a New Netflix Comedy About Comedy Called, ‘Standing Up’

Stand-up comedy has a long and controversial history in the United States, dating back to the minstrel shows of the mid-nineteenth century, evolving into vaudeville in the 1920s, and reaching what was thought to be its apex in the 1990s. But in the era of streaming, it has become even more ubiquitous, for a couple of simple reasons. First, it’s cheap to produce, with filmed comedy specials devoting the majority of their budget to paying the talent at their center. Second, it’s a form that seems pre-packaged for social media, with short joke clips well-suited for viral videos on TikTok or Instagram.

Along with a rise in stand-up over the last several years, we’ve also seen more TV shows about the lives of stand-up comedians. Harkening back to the glory days of Seinfeld, shows like The Marvelous Mrs. Maisel, Crashing, Louie, Hacks, Huge in France, and Feel Good explore the highs and lows (but mostly lows) of life as a stand-up comedian. It’s a genre that often manages to be both self-deprecating and self-aggrandizing, borrowing from the long and illustrious Hollywood snake-eating-its-tail history of celebrating movies about making movies.

The latest in this micro-genre is a French comedy show called Standing Up, from Fanny Herrero, the creator of the wildly popular French series Call My Agent! Standing Up focuses on four stand-up comedians trying to break into the Parisian comedy scene. Aïssatou (Mariama Gueye) is a star on the rise, balancing her old loyalties with new fame after one of her videos goes viral. Nezir (Younès Boucif) is a talented and driven young comedian struggling to beat financial odds and focus on his art while also caring for his disabled and unemployed father. Bling (Jean Siuen) is a cocky and unstable coke-addict still clinging to past successes, and is the owner of the local comedy club, Le Drôle (loosely based on the Parisian comedy club, Le Paname). And Apolline (Elsa Guedj) is a trust fund princess doing stand-up on the sly as a way to escape the perfectly-curated life her mother has planned out for her.

While Call My Agent! Is filled with cameos of the crème de la crème of French cinema, Standing Up brings newcomers to the forefront. In an interview with Financial Times, Herrero pointed out that this choice came out of a desire to give the show a sense of authenticity. “It was really important for me to have unknown actors who we could immediately believe were the characters.”

Standing Up lacks much of the charm of Call My Agent!, which succeeds in the dichotomy between hard-working, down-to-earth agents, and their glamorous but chaotic clients. In Standing Up, the comedians do both the drudgery and the deranged shenanigans, filling both roles simultaneously. The tone is more subdued and realistic, more woke than wacky. The cast represents the diversity of modern-day Paris, with three of four main characters played by people of color, and hardly a white cis man in sight.

This isn’t just a stunt, however, as Paris’s stand-up comedy scene was largely built by people of color. Fary, for example, was one of the first French comedians to get a Netflix special, later building one of Paris’s first dedicated comedy clubs, Madame Sarfati. And French-Moroccan comedian Jamel Debbouze brought stand-up to French TV early on with his show Jamel Comedy Club.

The show makes a clear point to illustrate the struggles of non-white French people in France, largely through the characters of Nezir, who is of Algerian descent, and Aïssatou, a young black woman. When Nezir arrives at Apolline’s house to return a bracelet she forgot, her mother mistakes him for an Uber driver and tips him for his trouble. He later jokes about this onstage, claiming that the only Arabs the mother had ever  encountered before were either Uber drivers or Saudi princes. Aïssatou also turns discrimination into material, after she and her sister are stopped by the police when emerging from a store with large bags of designer clothes, and are assumed to have stolen them. The only reason they are left unmolested is because one of the cops recognizes Aïssatou from her viral video, and asks to take a selfie.

In addition to discrimination, the characters face run-of-the-mill indignities in their lives as stand-ups. From begging for better stage times or publicity, to scrounging meager cash tips after shows. It’s a tough life, where characters are always one decision away from either viral fame or financial destitution. And even when they do succeed, it often comes at a cost, as when Aïssatou gains recognition for a sketch about her sex life with her husband that he grows to resent her for.

The quiet heart of the show is the friendship between Aïssatou and Nezir, who represent the best of what stand-up comedy can be: a platform for diverse voices to share their stories, and in doing so, turn tragedy into laughter. Anyone who has spent time in the world of stand-up comedy knows that it can be a hotbed of arrogance, misogyny, addiction, and abuse. But the squeaky wheels tend to get replaced quickly. It’s those who are dedicated to their craft and do the work who come out on top.

If you’re looking for something heartwarming, with just enough social justice content to make you feel like you’ve done your good deed for the day, then perhaps Standing Up is worth a watch. But despite the fresh faces and honest portrayals of stand-up life, it feels like something we’ve seen a few too many times before. Rather than make a show about stand-ups, it might have been more effective to take the up-and-coming comedians the show is meant to represent and cast them in a show about literally anything else.

“Stand-up is so trendy right now,” a character says to Aïssatou a few episodes in. “But we’ve been around for a long time,” she replies. This brief exchange sums up the problem concisely: we’ve already seen behind the curtain. Unfortunately, as long as the algorithm concludes that  this is what we want, the industry will continue to invite us to stare at the grungy, unkempt basement where comedy keeps its private horrors.