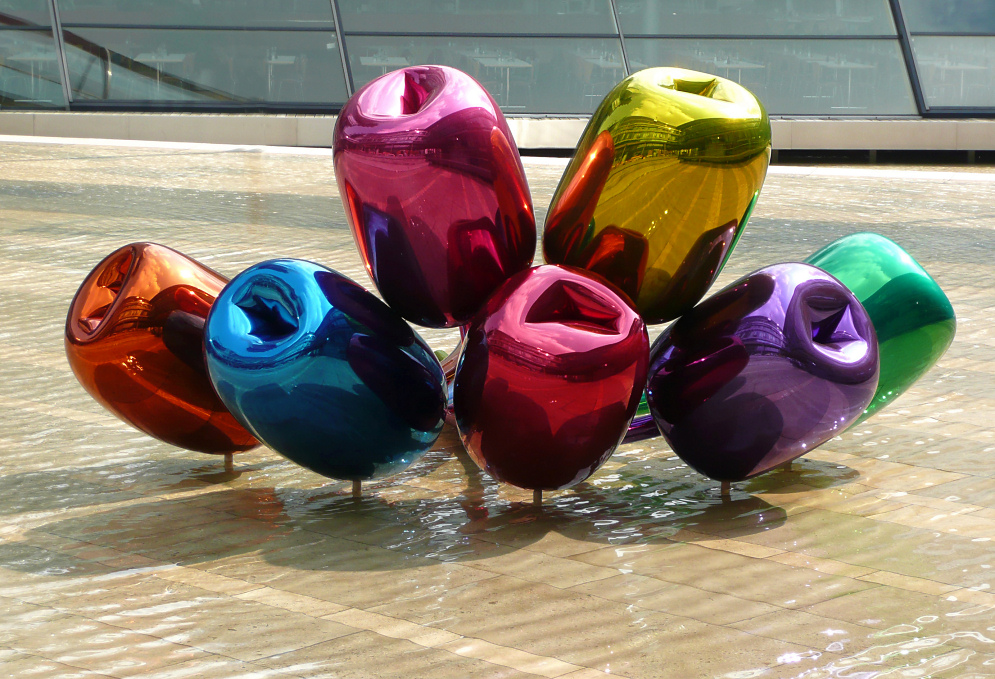 After a contentious three-year battle over the location (and acquisition) of a sculpture offered by Jeff Koons to the city of Paris, the American artist’s work has begun to arrive, in pieces, at Le Petit Palais, near where it will find its home on the Champs-Elysées. Installation has already begun.

The sculpture was offered by the American Embassy in Paris, and accepted by Paris Mayor Anne Hidalgo, to commemorate the 2015 and 2016 terrorist attacks in Paris. “Jeff Koons created Bouquet of Tulips for the City of Paris and the people of France as a symbol of friendship,” reads the description of the piece on his website.

The tulip bouquet, appropriately called “Bouquet of Tulips,” created in the classic Koons style, is his largest work yet, with dimensions of 34′ x 27′ x 32′ and an impressive weight of 33 tons. Made of polychromed bronze, stainless steel and aluminum, the bouquet, held up by a disembodied hand, contains 11 tulips, not a dozen — the missing tulip represents the victims of the attacks.

The piece has been mired in controversy since it was first announced. The artist wanted it installed on the lawn of the Palais de Tokyo, which has a view of the Seine and Eiffel Tower. Prominent French artists, politicians and culture figures openly opposed to it and its location because the piece “would amount to advertising or product placement.”

Many take issue with the fact that the sculpture is meant to be an offering, but it itself is not. Only the concept was donated by Koons; a private foundation, using a roughly even number of French donations and American donations, paid for the production and installation costs of about $3.5 million. A representative for Koons, Jérôme de Noirmont, told Le Parisien that the artist was giving up “everything” by offering the city the copyright. Of the revenue from the sculpture’s depiction in postcards, photo reproductions and other derived products, “20 percent will go to the City, which will take care of the maintenance for the work. And 80 percent will go to associations for families of the victims of the 2015 and 2016 attack,” explained de Noirmont.

The sculpture, arriving in pieces at Le Petit Palais since August 22, will be set up in the coming weeks on the lawn between the museum and the Champs-Elysées. The public inauguration is planned to take place on October 4 and 5, during Nuit Blanche, the annual event featuring all-night of art installations and performances spread throughout the city.