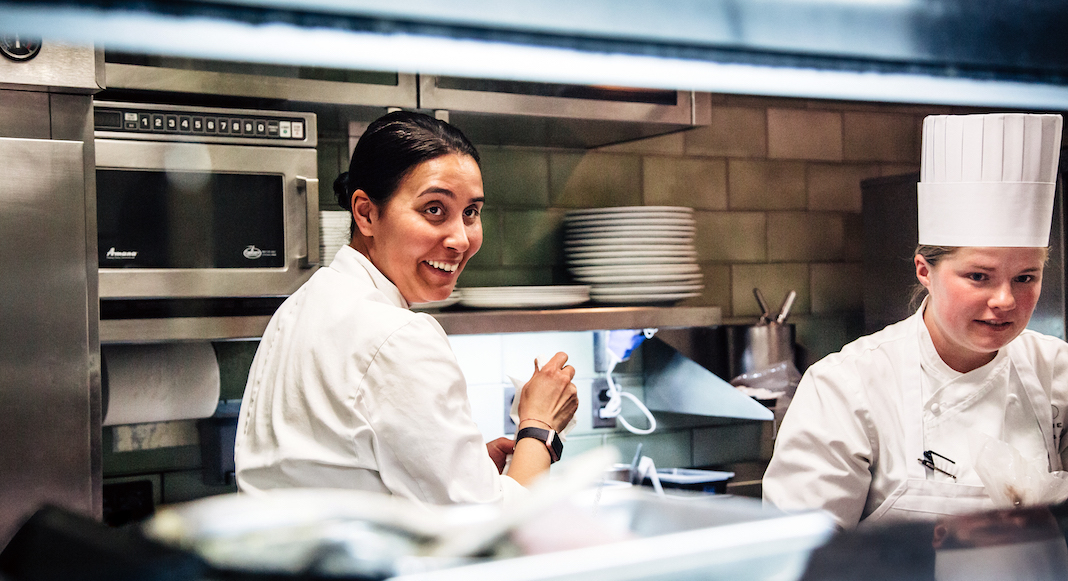 Chef Ghaya Oliveira’s journey towards becoming Executive Pastry Chef at DANIEL, the two Michelin-starred French restaurant in New York, was nothing short of unconventional: from watching her mother and grandmother cook at home in Tunisia to leaving the world of investment banking where her career began to the pastry book she bought herself at Barnes & Noble during her first job. “When I got [to New York] it was not my intention at all to get into this business,” Oliveira confessed.

Before she finessed her artistic touch in the restaurant industry, earning her the 2017 James Beard Foundation Award for Outstanding Pastry Chef, Oliveira’s experience with cooking was with her family. “On my mother’s side most of them are artists, musicians, painters, I guess it was something in the family,” reflected Olivera on her kinship with creating desserts. She was especially inspired by the feasts her grandmother and mother would prepare with the finest ingredients. While the French still held Tunisia as a protectorate, she remembers her grandfather bringing her grandmother baskets of French products. “The highest quality of chocolate. The highest quality of praline, bonbons, nougats, things like this, all the liqueurs, liqueurs de cassis, liqueurs de violettes,” the chef described.

Oliveira started at DANIEL in 2001 where her curiosity and Chefs Remy Funfrock and Eric Bertoia helped the chef develop her techniques and her ability to draw more natural flavors out of fruits. A couple of years after joining DANIEL, she decided to attend a small culinary institute — the Culinary Academy of Long Island — and later, completed a program in restaurant management at the French Culinary Institute. In the kitchen, everyone was asking, “’Which school did you go to, which school?’ Everyone keeps asking, you know. I didn’t get the chance to be in those programs, but I felt like it was a necessity and it was also good to understand the concept of American pastries too,” Oliveira explained. “Actually, that’s where I learned how to do a cheesecake,” she continued, chuckling, “and I know how to do a very good cheesecake.”

Oliveira’s path to DANIEL certainly was unconventional. By way of a brief stint trying to get onto Wall Street and a flirtation with a career in dance — Oliveira grew up dancing ballet — she ended up working as a dishwasher at Placido Domingo restaurant. “A lot of people get into the restaurant business really from the bottom. I was a dishwasher. I was a prep cook,” explained Oliveira. After helping her superiors with the pastries, she moved into that specialty. When the restaurant closed, the general manager sent the French-speaking chef to Daniel. “I remember very well,” Oliveira recalled. The general manager told her “‘I’m going to send you to a restaurant where they speak French,’ I was like “Ah okay good!” because at that time the [English] language was still difficult.”

Oliveira got excited talking about her passion for creating unique pastries and desserts. “I was amazed, mesmerized, curious — everything was interesting to me. I dedicated all my time to that,” Oliveira explained. The excitement behind pastries for Oliveira is in the mix of science and art. “It’s never-ending, it’s like a frenzy of creation and creativity and you fall in love with it.”

The chef’s creative impulses also stem from Tunisia. For each dessert to capture what Oliveira calls “a surprise,” or the “extra touch,” she calls back to the flavors she grew up with: floral distillations of geranium, rose, jasmine, neroli and orange blossom. Spices, a lot of spices, anything with a note,” Oliveira explained. “I always wanted to use saffron, peppers, all kinds of peppers.”

When Oliveira was born, the task of cooking turned to her mother. “I remember I didn’t get a chance to help her out a lot but [I was] always there to do little things for her, peeling the hazelnuts when they get roasted,” but often “they never made it to the desserts because we’d eat all of them,” she confessed, laughing. “A lot of little details things like this. Growing up smelling the food cooking or the desserts, that stays in your memory it’s just very important.”

As for Oliveira, her role in the kitchen was much more modest, yet just as resourceful. Aside from making crêpes, her specialty was caramel lollipops. “I used to take pencils,” she began, laughing, “melt some sugar, and dip my pencils in the caramel and roll it to make like a lollipop and freeze them.”

For this chef, tapping into these memories is integral to her process. She makes certain choices “because I remember growing up I had that” By playing with the savors of her memory, she can only hope her desserts help her diners tap into their own. “I think the best thing for me when someone is eating a dessert is like, ‘Oh my god, it reminds me of when I was young.’ It’s the best thing to hear for me. It means it’s a very special taste,” explained Oliveira.

In a sense, the past is what keeps Oliveira moving forward, always inventing and creating a new conglomeration of flavors and notes. Even small things, she explained, create this link. On a recent trip to Paris, she bought several bags of the popular caramel French candy, Carambar. “I was like, ‘Oh my god, I haven’t had these,’ I bought them at the airport, I got like five bags. Things like this, it always gets you back to your memory and that’s what stays the most.” It’s through taste and experimentation that Oliveira nurtures this connection. “Your memory plays a lot of games with you. It’s important, it keeps you attached to the past.”